The mission to orbit the moon will be unmanned, but it will provide a foundation for future deep-space exploration and demonstrate NASA's commitment to landing astronauts back on the moon 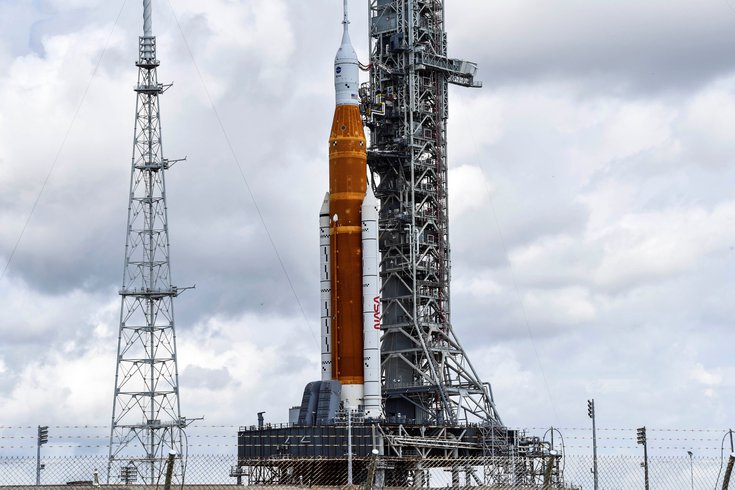 Artemis 1, seen here at Kennedy Space Center, will take off on Monday, Aug. 29, between 8:33 a.m. and 10:33 a.m. It is NASA's first integrated test of the Orion spacecraft, Space Launch System (SLS) rocket, and the ground systems at Kennedy Space Center in Florida. The launch can be viewed during a livestream on Youtube.

NASA is testing some of its deep space exploration systems for the first time tomorrow, and those at home can tune in to the launch thanks to the agency's live stream.

Artemis 1, which takes off on Monday, Aug. 29, is NASA's first integrated test of the Orion spacecraft, Space Launch System (SLS) rocket, and the ground systems at Kennedy Space Center in Florida. The launch window is 8:33 a.m. to 10:33 a.m. EDT.

MORE: Spotted lanternfly population is shrinking in Southeastern Pa., but it's growing elsewhere

The mission will be unmanned, but it will provide a foundation for future deep-space exploration while demonstrating NASA's commitment to return humans to the moon and beyond.

Since Artemis 1 will have no crew onboard, it act as a dress rehearsal, of sorts, demonstrating the performance of Orion and the SLS rocket and testing their capabilities to orbit the moon and return to Earth. The launch of Artemis 1 paves the way for a manned moon-bound flight test with Artemis 2 in 2024, and an actual lunar landing by 2025 with Artemis 3. NASA hopes future missions will include landing the first woman and the first person of color on the surface of the moon.

Heading to the distant retrograde orbit around the moon, the mission's duration will be 42 days, 3 hours, 20 minutes and will travel approximately 1.3 million miles. It will return to the Earth at a targeted splashdown site of the Pacific Ocean off the coast of San Diego on Oct. 10, 2022.

During the flight, the Orion spacecraft will launch atop the most powerful rocket in the world, flying farther than any spacecraft built for humans has flown. Orion will also stay in space longer than any human spacecraft has, without docking onto a space station. It will return to Earth faster and hotter than any craft yet has.

NASA is providing coverage of prelaunch, launch, and post-launch festivities on NASA Television, the NASA app and the NASA website. A livestream is available to watch on the agency's Youtube channel.

The last time a rocket as powerful as this took off from Kennedy Space Center was way back in 1973, when the Saturn V moon rocket carried Skylab into orbit ending the Apollo era, according to Space.com. So, set your alarms because Monday's launch will be a must-see event.