Spotted lanternfly population is shrinking in Southeastern Pa., but it's growing elswhere

While experts aren't sure what's causing the decline, soil fungi and predators may have something to do with it 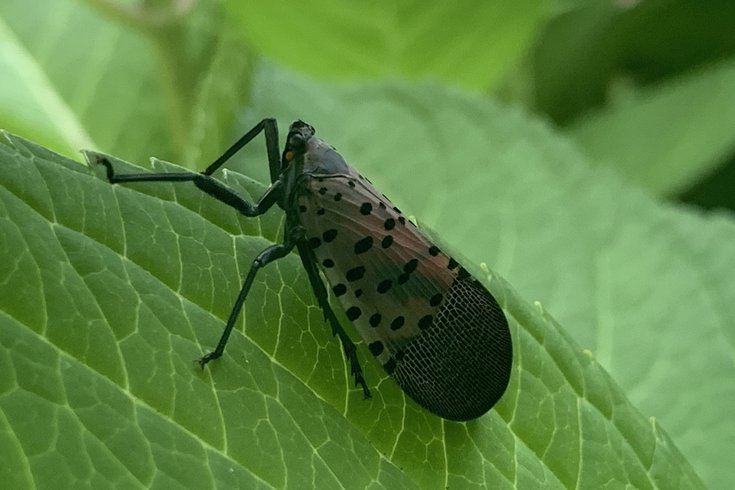 The spotted lanternfly population in the Philadelphia area has dropped in recent years even as the invasive species have expanded into other parts of the state and South Jersey.

People in Philadelphia and the suburbs may now be seeing more spotted lanternflies, as late summer is when the insects mature into adults, grow wings and take flight.

However, reported sightings in the region have declined since the invasive, crop- and fauna-destroying species first made it to the city five years ago.

The number of reports in the city shrank by 92% between July 2020 and 2022, from 7,877 to 575, said Shannon Powers, the Pennsylvania Department of Agriculture's press secretary. The drop was even more dramatic in the suburbs, where reported sightings shrank by 95% over the same period, from 19,652 to 839.

But scientists aren’t sure what's causing the decline. The bugs, which are native to East Asia, have continued to expand their territory into other parts of Pennsylvania and South Jersey.

"Reports only indicate public awareness and willingness to take the time to report," Powers said. "The novelty may have worn off."

"We had some people (in Pennsylvania) who were spending hours a day squishing these things and recording them in the app," Line said. "After a year or two or a summer or two of doing that, you kind of say 'OK, well, I've probably got better things to do with my time.'"

In 2020, about 90% of posts on Squishr were from Pennsylvania users, Line said. Now, about half come from users in North Jersey and New York. The app is also growing in the Midwest and Maryland, which are some of the spotted lanternfly’s newest frontiers.

Berks County was the first place in the U.S. where the species was spotted in 2014, so it makes sense that interest in Pennsylvania is now lower than in other parts of the country. But in southeastern parts of the state, there have been fewer lanternflies around to kill in recent years, even as they’ve become more common in other nearby regions.

There are a few theories about what might be behind this disparity.

Two types of soil-based fungi common in the region, Batkoa major and Beauveria bassiana, were found to be fatal to lanternflies in a 2019 study from researchers at Penn State University. Additionally, local predators – like blue jays, crows and praying mantises – were initially apprehensive about eating the bug, but they may be warming up to them.

"Anecdotally, lots of places where there previously were infestations have seen fewer insects this season," Powers said.

The Philadelphia area's early enthusiasm toward killing the bugs may have had a beneficial impact, since each female can lay between 30 and 120 eggs every year in up to two masses. Experts aren't certain, though.

"It’s not clear why insect populations have decreased some places and not in others," Powers said. "Many places where people have actively worked to eliminate egg masses and control the insects are seeing fewer insects."

Still, spotted lanternflies have rapidly expanded into more portions of Northeast and Western Pennsylvania. Statewide, sightings more than doubled between July 2021 and 2022, from 4,827 to 9,885.

That's why residents are still being asked to report any sightings online or by calling Penn State's hotline at (888) 422-3359.

Across Pennsylvania, 45 of the state's 67 counties are part of the state's spotted lanternfly quarantine, which regulates the movement of items that may harbor the insects, including landscaping waste, firewood, packing materials and nursery stock.

"Lanternflies move to new homes by hitchhiking with people," Powers said. "They aren’t spreading widely on their own."

The rules are even more stringent for business owners who move regulated items in and out of the quarantine zone. They need to get a permit from the state.

Spotted lanternflies were not detected in New Jersey until 2018, but they have since been found in all 21 counties. The state is no longer asking people to report lanternfly sightings.

The New Jersey Department of Agriculture received 4,000 calls about lanternflies last month, which was up from 2,300 in July 2021, said Jeff Wolfe, the department's public information officer.

Earlier this month, thousands of the bugs descended on beachgoers along the Jersey Shore. A similar swarm engulfed an apartment building in Jersey City a few days later.

In New Jersey and Pennsylvania, residents are still encouraged to kill any spotted lanternflies they see by stomping on them. Glue and tape traps aren't recommended, because they also create a hazard for other animals.

Additionally, people should look out for any egg masses, which are typically about one inch long and one inch wide. They often look like a patch of mud or cement and should be scraped or smashed.