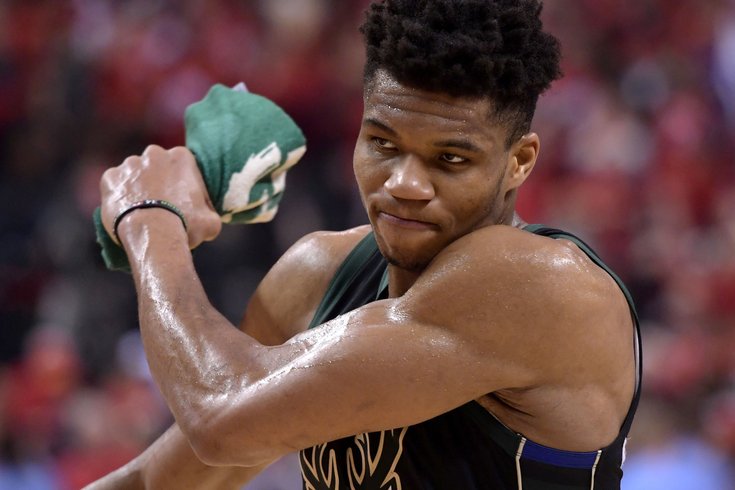 Jinder Bhogal, who has just over 500 followers on Instagram and calls himself an "artist by night" based in Philly, designs shirts and sweatshirts based on popular NBA players like Ben Simmons, Joel Embiid, and James Harden. Bhogal created this design of Antetokounmpo, a play on the 24-year-old NBA star's Greek heritage and his current team:

The problem arose when Bhogal used the phrase "Greek Freak" in describing the shirts, according to TMZ Sports.

Antetokounmpo owns the trademark on the name "Greek Freak" for commercial purposes, and expressly for use on clothing and apparel. He officially landed the trademark for the nickname in February 2018, after applying in May 2014.

Court documents filed by Antetokounmpo on Monday detailed that the basketball star is seeking up to $2 million for trademark infringement, according to TMZ.

Bhogal told TMZ he reached out to Antetokounmpo's people to resolve the issue, and is being "fully cooperative with their request to remove all "Greek Freak" merch from his site." As of Tuesday afternoon, the Antetokounmpo design wasn't available on Bhogal's website.

In an Instagram story post Tuesday, Bhogal said he learned about the "situation" through TMZ. He also took a slight shot at Antetokounmpo and his team in a story post, giving a shout out to "people/brands/figures that find a way to work with artists instead of shutting them down," with a screenshot of a Bruce Lee-inspired shirt that was shared by Bruce Lee's official Facebook page.

"@BruceLee, well done," Bhogal continued. "I wish others would treat their fans the same."