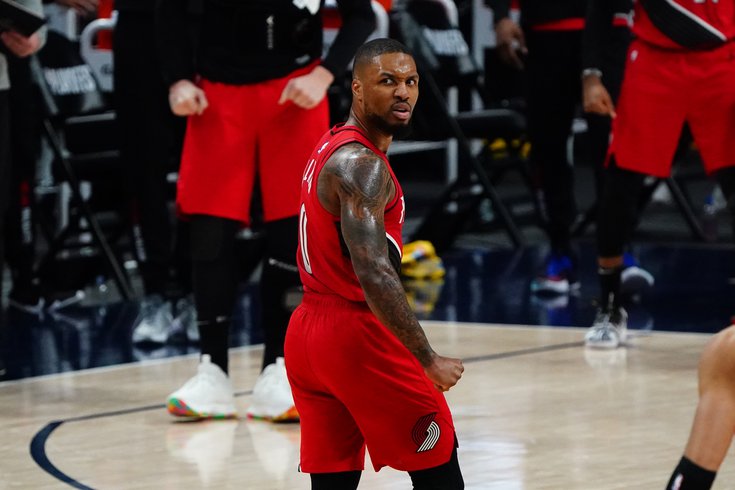 Portland Trailblazers star Damian Lillard will reportedly make a trade request "in the days to come," according to Henry Abbott of TrueHoop. It's not the first time we've seen suggestions that Lillard could try to make his way out of Portland after valiant efforts to push the Blazers to contention, but it comes at a moment of increased disarray for the franchise.

UPDATE (Friday, 5:45 p.m.): Lillard, speaking with reporters following a Team USA practice on Friday afternoon, denied Abbott's report that a trade request was imminent. But he did not close the door on the conversation entirely, noting, "I haven't made any firm decision on what my future will be." He would go on to say that he doesn't believe the current Blazers have enough to truly compete, even with new head coach Chauncey Billups, and that they can't view themselves as, "a championship team."

How can an organization experience more turbulence in the offseason than during the season, you might ask? Well, let's run through a few of the recent things that have bubbled to the surface recently:

And then there's the fact that, well, Neil Oshey hasn't exactly inspired a lot of confidence in his ability to lead a team and build a contender around Lillard. It may not be any one issue for Lillard, and it feels more like a death-by-1000-cuts situation, but it (allegedly) has him looking for the exit for the first time in earnest.

If Lillard eventually gets to the point where he makes a request, he immediately becomes the most desirable and truly available star on the market. Lillard is something of a folk hero in Portland, a crunch-time assassin who has routinely produced some of the league's most exciting games and moments over the last nine seasons. Teams would immediately become more relevant by acquiring him, and would-be contenders could become actual contenders if they're able to swing a fair deal for Lillard.

For Philadelphia specifically, it would be hard to draw up a better fit to play next to Joel Embiid in Philadelphia's quest to win a title. Lillard is basically an elite offense by himself, a pull-up shooter with preposterous range who consistently draws hard traps and attention out to halfcourt, a pick-and-roll monster who punishes the slightest misread from an opposing defense. Last year was actually a down year for Lillard as a pull-up shooter, and he still managed to make over 37 percent of his 8.1 pull-up threes attempted per game, and when teams sell out too hard to stop his outside shooting, Lillard will go by guys off-the-dribble and either score or get fouled on his way to the rim. He's one of the league's elite free-throw shooters, ranking in the top 10 by volume and second overall in efficiency last season.

Lillard would be a dream partner for Embiid, dragging defenders away from the paint with his shooting and capable of creating easier looks for Embiid with the attention he draws out of the pick-and-roll. It would force Embiid to do more work on the move, but Embiid showed he was willing to do that during his brief time with Jimmy Butler in 2018-19. On the other end of the partnership, Lillard having more open looks created for him when teams send doubles at Embiid would create more catch-and-shoot looks and closeout attacking opportunities. It would take some time for both guys to get comfortable in a new setup, but the apex version of Embiid/Lillard would be a nightmare for opponents to deal with.

A lot of the value Embiid would provide for Lillard, mind you, would be on the defensive end. Lillard has graded out as one of the least impactful defenders in the league pretty consistently in Portland, a fact that has contributed to the Blazers' inability to rise past their current place in the Western Conference playoff picture. He's far from the only culprit, but he has been hunted by opponents even in recent Team USA exhibition games, and could stand to play with a dominant defensive anchor like Embiid. The big guy could clean up for his issues at the point of attack and allow him to save some energy for the defensive end by carrying the offense the way Sixers fans have already seen him do.

That brings us to price, which is going to be significant no matter where Lillard (theoretically) gets sent. It is going to take most of Philadelphia's war chest to get a deal done, and in all likelihood, it would fundamentally change how the Sixers look and function to go after Lillard.

Ben Simmons and (I presume) an assortment of first-round picks will be the starting point, but I don't think it will be the endpoint, both because of recent star-trade precedent and Simmons' hard-to-place value on the open market. The James Harden trade talks, where Houston demanded picks and young players on top of Ben Simmons, are a good frame of reference, as is Milwaukee's pick-heavy trade to acquire Jrue Holiday last offseason. The Blazers would almost certainly come into talks asking for Simmons, every draft pick and swap that isn't nailed down, and Philadelphia's most promising young players, Tyrese Maxey and Matisse Thybulle.

Where would or could the Sixers draw the line? They balked at add-ons in Harden talks last summer, backing Maxey to go on to big things in the future. Bringing an in-his-prime point guard to the team might change that calculus, or it could give them the incentive to try to hold on to Maxey and develop him as Lillard's understudy. You could also argue that Thybulle is even more valuable in a Simmons-less future built around Lillard, where he'd potentially slide into the starting lineup immediately and take on the top defensive assignments every night. On the other hand, he's a familiar face as a guy who played his college ball in the Pacific Northwest, and a player who can help Portland try to continue winning games right now even as they rebuild in a post-Lillard future. Trading most (or at least some) of your capable depth players would be a tough pill to swallow on top of the rest, but trading for a high-level offensive star is the sort of opportunity you do that for.

(A team with Embiid and Lillard might initially lack depth, but that is the sort of partnership and situation that can draw buyout players and veteran free agents to the team on cheaper deals to go ring-chasing. Depth can be found and made up for, star power cannot.)

The most important factor, one could argue, is exactly where Lillard wants to end up. As we have seen in other recent examples, player preference is a huge driver of these star deals, with franchises wary to cross powerful agents and players who are forcing their way out. That hasn't done much to undercut trade value, and given Lillard's hero status in Portland, the Blazers would almost certainly get raked over the coals by their own fanbase if they traded Lillard against his wishes just because.

Would Lillard want to come to Philly and play with Embiid? That's an open question at the moment, and it should be noted that he is an Oakland, California native who has never played further east than the state of Utah, where he played his college ball at Weber State. East Coast living might not be for him, though it would make sense from a basketball perspective for Lillard to seek an opportunity in the Eastern Conference to escape the meat grinder of his current conference.

Ultimately, Lillard wants to win, and a deal to the Sixers would provide him an A-list partner to play with, a softer conference to attack in the regular season, and a chance to potentially draw more talent moving forward. It would cost the Sixers quite a bit, especially because Lillard is locked up and under contract for four seasons, free agency not a concern until 2025. But that's a feature for Philadelphia, not a bug, ensuring their most important players are here well into the future.

Lillard has dispelled previous suggestions that he wants or is asking out, and he did so again this time, albeit while leaving the door open for his future. But this appears to be inching closer to a conclusion, and the Sixers may have their opportunity to make a franchise-altering move in the weeks to come.