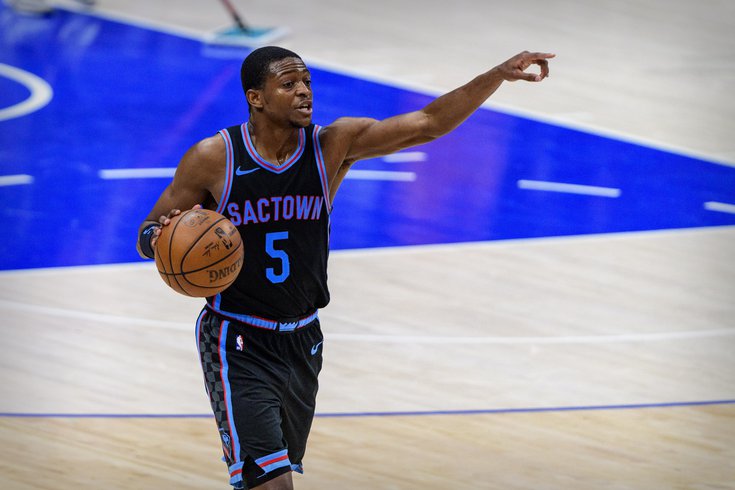 The Sacramento Kings made the rounds in Ben Simmons trade rumors on Tuesday afternoon, and they're back in the news again today with a report from a local reporter who says De'Aaron Fox isn't likely to be on the table in trade talks.

That's the word from Jason Anderson of the Sacramento Bee, who writes on Fox and the Simmons trade picture:

The potential for a deal is there, but the 76ers are reportedly seeking an All-Star caliber player in return. De’Aaron Fox would probably fit that description, but sources have maintained the Kings are highly unlikely to trade their dynamic 23-year-old point guard.

The Kings would be looking to put Simmons, a 6-foot-11, 240-pound point guard, in a frontcourt position in a lineup featuring Fox, Tyrese Haliburton, Harrison Barnes and possibly Richaun Holmes, if they are able to keep him in free agency. The addition of Simmons would immediately improve a team that finished 30th in the NBA in defensive rating and rebounding last season.

Sacramento would probably be willing to offer a package that includes Buddy Hield, Marvin Bagley III and one or more future first-round draft picks. One league source recently told The Sacramento Bee the Kings would have to send a minimum of three first-round picks to the 76ers in a trade constructed around Hield and Bagley. Another source said the 76ers wouldn’t be interested unless Fox or Haliburton were included in the trade, but Hield’s elite 3-point shooting and Bagley’s unrealized potential could be appealing if a better deal doesn’t materialize.  [Sac Bee]

In the opinion of this writer, that last paragraph is a pretty generous framing of the package coming back to Philadelphia in such a theoretical deal. Bagley has been relatively public with his desire to leave Sacramento for bigger opportunities elsewhere, opportunities that aren't going to exist in Philadelphia with Joel Embiid manning the center position, and he's getting paid No. 2 pick slot money for production that has lagged far behind his peers in a terrific 2018 top-five. Buddy Hield, a name we've been over in the past, is a high-volume, high-efficiency outside shooter who would certainly fit great in an Embiid-centric offense, but he's hardly the "All-Star level" talent the Sixers are in search of in return for Ben Simmons.

Fox is pretty obviously Sacramento's crown jewel at the moment, so a reluctance to part with him is understandable. He is fresh off of his best individual season to date, averaging 25.2 points and 7.2 assists on solid efficiency that is improving almost everywhere on the floor. Fox leveraged his speed better than ever before in 2021, albeit in just 58 games played, posting career-best numbers at the rim and showing flashes of the ability to carry an offense, accumulating 17 games with 30 points or more while also carrying the Kings as a playmaker.

He is not without his warts. As we mentioned Tuesday, he's still a below-average shooter from deep and a somewhat questionable fit next to a guy like Embiid, a willing shooter who would have more pressure to make teams pay from deep, though you could argue that could just be a shot profile issue. As a catch-and-shoot player, Fox was actually pretty damn good on low volume, shooting 39.3 percent from three on 1.5 catch-and-shoot attempts per game last season, with his pull-up volume and percentage dragging down his average. A world exists where giving him the proper amount of responsibility results in lightening the load for Embiid while still putting Fox in better spots to succeed as a shooter, though it might take some time to figure that out, and that's without considering the other parts of his game. Fox may not be a bad defender in the right circumstances with the right staff, but he has disappointed on that end in the pros.

Haliburton was excellent as a rookie, dispelling some concerns about his shooting form with an excellent year from deep in 2021 and serving as a terrific off-the-bench spark for the Kings. He may very well grow into a true difference-maker over time, given his game intelligence at an early stage of his career and fill-in-the-blanks skill set. But banking on a 21-year-old to be your lead perimeter initiator, as we've discussed when evaluating a potential trade for one of Cleveland's young guards, would come with a considerable amount of short-term downside for a team looking to compete for titles during Joel Embiid's prime. He is hardly a stand-in for Fox either from a value or production standpoint.

The first-round pick demand mentioned here is interesting only in the sense that it seems like a precursor to a bigger or multi-team deal, which seems like a necessity especially if players like Fox are not being made available for Simmons. If the Sixers are able to recoup several first-round picks from a shaky franchise like the Kings in exchange for Simmons, that could be enough (when combined with their own picks) to send the godfather assets offer to a team like Portland, Washington, or perhaps even Chicago for readymade star talents.

But again, the framing on Sacramento's end is another example of how difficult it is to thread the Simmons trade needle. There is plenty of interest in him broadly speaking, particularly from teams who are looking to get back in the playoff mix after droughts, and/or teams that are in non-glamour markets. They can afford to worry about Simmons' playoff issues after they actually get back to the playoffs and rejuvenate their respective fanbases, championship concerns still quite a ways off. But with their teams on the outside looking in as it is, organizations like the Kings will also be extra wary of letting any impact talent go that they already have in place, undermining that push for a playoff berth before it even begins in earnest.

You could certainly make an argument that if teams like the Kings already had true impact talent, they would have been able to push closer to a playoff berth already. But there are numerous recent examples of young talents just needing the right mix around them to go from big stats guys to playoff performers. Trae Young only needed a better mix of talent and a coaching change to go from being accused of hollow stats to the engine of a Conference Finals team. As Phoenix has assembled pieces around Devin Booker, any claims that he can't translate his game to a winning situation look very silly in hindsight.

Fox is not in the offensive class of those guys, but he would absolutely benefit from playing next to a two-way guy like Simmons (and vice versa). Simmons is just not the only guy who could help Fox make the next step, and even if Sacramento is desperate to take that next leap, perhaps they will err on the side of caution under the leadership of Monte McNair, a former Daryl Morey ally in Houston.

There's a strong contingent of Sixers fans who align with Philadelphia's stated goal of an All-Star or bust, and that's the right attitude to come into this with, but it's also a narrow view of upgrading the team in the short and long term. If Fox is more gettable than Sacramento is letting on, you only need Fox to be more valuable than Simmons in some way, whether in a practical or theoretical sense. It would obviously be preferable if he's more valuable on the floor and pushes the Sixers further than Simmons could, but even if he's not that guy, you would simply be making a bet that you would have more paths and an easier time building a package for the future guy (Lillard, Beal, or otherwise) with Fox as the headliner rather than Simmons. Given the scattered reports about Houston's wariness of Simmons as the ultimate headliner in a James Harden deal, it wouldn't be insane to swap Simmons for Fox through that lens alone*.

(*For the record, even after all the scuttlebutt this summer, I still think the allure of Simmons is more valuable if you're constructing a star deal, and think you can only do this sort of deal if you truly believe Fox will be a better sidekick for Embiid, period.)

Regardless, Simmons is not a plug-and-play talent you can just drop into various teams around the league without significant restructuring of the roster and identity to consider. He is a unique talent that will warrant an examination of the surrounding pieces no matter where he plays, and that will undoubtedly factor into which players teams make available for him in trade discussions.

It's likely a moot point in this case, with the Kings showing no sign of moving Fox to make this happen. But prepare for a lot more, "This team is interested in Simmons, but..." stories until this is resolved.

RELATED: The Sixers need to trade Ben Simmons, for his sake and their own