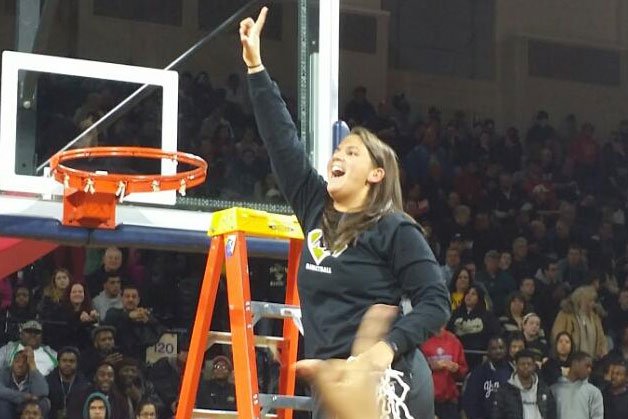 From afar it looked easy, guiding a talented team that finished as a state runner-up the previous year, and no foreseeable entanglements ahead.

But Andrea Peterson navigated through more than what she expected when she was named head coach of the Neumann-Goretti girls’ basketball team, ranked No. 1 in the nation.

A controversy weighed on the Saints all season, but despite it all, Peterson has Neumann-Goretti sitting at 27-0, rated No. 1 nationally by USAToday and in position to win the school’s first girls basketball state championship.

Peterson was rewarded for her efforts on Wednesday, when she was named the Naismith 2015 Coach of the Year. Peterson will receive the award March 24 at The Naismith Award Ceremony in Atlanta.

“These girls fought through so many battles, they’ve made me stronger and I’ve made them stronger, I believe,” Peterson said.

“Without these kids, and they didn’t believe in me, I wouldn’t be in this position,” said Peterson, a two-time all-Catholic League selection at Archbishop Carroll who went on to play at Drexel, where she earned a B.S. in sports management and a master’s degree in higher education. “They know I have their back and believed in me from Day One, and if they don’t believe in you and have your trust, we wouldn’t be where we are.”

Peterson took over for former coach Letty Santarelli, who resigned for personal reasons on Nov. 7, 2014. Peterson, 30, runs a day care center in Delaware County and was an assistant under Santarelli last year.

“This is a great honor,” Peterson said. “I was told Tuesday night, and we couldn’t say anything until it was announced Wednesday afternoon. When I was originally told, I couldn’t believe it.”

Peterson navigated through a few storms this season — and it’s been a year that’s involved more than just basketball.

“These girls fought through so many battles, they’ve made me stronger and I’ve made them stronger, I believe,” Peterson said. “We were doubted. I think we silenced a lot of our haters, and people [who] thought these kids and this program would come crumbling down. Coaching this team and everything going on around us has made us so much stronger, and added fuel to our fire.

“These girls deserve to be the best team in the country. I remember when I walked into the gym last year ... that they were going to be very good. I know what they’re capable of doing. This is not about me. It’s about these kids and the success that they’re having.”

Peterson said her main goal was more than just about basketball. Her intention is to make her girls the best people they can be.