New cholesterol study may lead you to ask: Pass the eggs, or pass on the eggs?

Here's what to know about dietary cholesterol and saturated fat 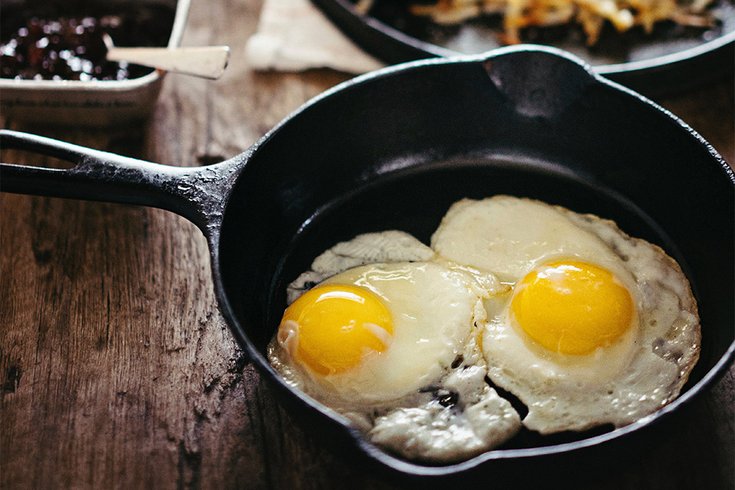 The recent news that eating three to four eggs a week is linked to a slight increase in risk for developing heart disease was a bummer for egg lovers. Should you stop eating eggs because of this new finding?

The study, published in March in the Journal of the American Medical Association, examined the association between dietary cholesterol or egg consumption with cardiovascular disease and all causes of mortality.

MORE HEALTH: Does CBD work? Science isn't sure, but Philly-area residents say it's helping them

When the most recent version of the Dietary Guidelines for Americans did not include a recommendation to limit consumption of dietary cholesterol, it left many consumers confused. Since the initial release of the Dietary Guidelines in 1980 and in the six following editions, there has always been a recommendation to limit total fat, saturated fat and dietary cholesterol.

The 2015-2020 Dietary Guidelines’ key recommendation instead focused on consuming less than 10% of daily calories from saturated fats with no mention of dietary cholesterol. Many consumers concluded that dietary cholesterol must no longer matter.

I am a registered dietitian nutritionist and will try to explain the study and previous findings.

WHAT IS CHOLESTEROL ANYWAY?

Cholesterol is a waxy, yellowish fat that is produced in our liver and intestines. It is found in every cell of the body. It is a necessary component for many of our bodies’ physiological and structural functions, including cell membrane construction, hormone production and other vital functions. All the cholesterol we need can be produced by our bodies, so it is not essential that we consume dietary sources of cholesterol for our well-being.

While our bodies make cholesterol, we can also consume cholesterol from the foods we eat. These “dietary” sources of cholesterol are found in animal sources that produce cholesterol. So foods, such as beef, pork, lamb, chicken, eggs, fish and shellfish all contain cholesterol in various amounts. Small amounts of dietary cholesterol can also be found in items produced from animals, such as milk.

Plant sources, including vegetables, fruits, grains, nuts and seeds do not contain cholesterol. However, some plant sources naturally contain saturated fats, and through processing and preparation can have saturated fats or trans fats added to the final product. The 2015-2020 Dietary Guidelines recommended limiting saturated fats from all sources to less than 10% of total calories (that would equal about 22 g of saturated fat in a 2,000 kcal/day eating pattern).

The 2015-2020 committee decided not to provide a daily limit of dietary cholesterol intake, which had been included in previous versions of the Dietary Guidelines. This was due in part to a lack of evidence regarding just how much of an effect dietary cholesterol had on an individual’s blood cholesterol level.

The advisory committee also noted that the average daily intake of dietary cholesterol in the United States was already below the 300 mg recommended threshold.

The omission of any definitive recommendation combined with the increasing popularity of low carbohydrate-high fat diets almost seemed an endorsement of dietary cholesterol. However, this was not the 2015-2020 DGA committee’s intent.

WHAT ABOUT THOSE WITH HIGH BLOOD CHOLESTEROL?

Less than optimal levels of blood cholesterol continues to be a critical risk factor for cardiovascular disease.

According to the Centers for Disease Control and Prevention, more than 125 million adults have a total cholesterol above the recommended 200 mg/dL.

For those where high cholesterol is not a current concern, consuming eggs three to four times per week appears to pose little risk to their overall health, especially if they are following other aspects of a heart-healthy diet.

However, people who have high cholesterol should continue to pay close attention to sources of saturated fat and dietary cholesterol.

WHAT CAN WE LEARN FROM THIS EGG STUDY?

It is always difficult to draw a definitive conclusion based on the result of a single study. In fact, most scientists discourage doing so. It is also very important to consider the study’s design.

Regarding the JAMA article, this was not a single study with over 29,000 participants. Instead, it was a collection of six large studies conducted over a long period of time and then combined into one study.

Considering methods differed between the studies, it can be difficult to align the studies and participants exactly. While the authors worked hard to correct for this, it will still remain a limitation.

Second, the initial studies used self-reported dietary data which can result in inaccurate data and relied on a single measurement of both egg and dietary cholesterol intake, which may not reflect habitual intake.

Finally, while many additional heart disease risk factors were considered in this study, there is still a risk of “residual confounding,” which results when some other variable may actually be responsible for an outcome instead of the main variable investigated.

So, where does such a study combined with our current knowledge of the subject leave the public?

People who have normal blood cholesterol levels can continue to eat foods such as eggs and shellfish, which contain high levels of dietary cholesterol but low levels of saturated fat. These individuals should also consider following the Dietary Guidelines key recommendations. Currently, there isn’t sufficient evidence to conclude how much is too much for this segment of the population. And as previously noted, ongoing concern continues to be placed on the effect of saturated fat from all sources.

However, for those with high cholesterol, there remains strong evidence that a heart-healthy eating pattern that focuses on limiting daily intake of saturated fat, trans fatty acids and dietary cholesterol while consuming a variety of fiber-rich vegetables, fruits, whole grains, low-fat and fat-free dairy, nuts, seeds and legumes is still very important.

Since determining to what degree each factor plays in every individual’s blood cholesterol is impractical, the prevailing logic for those who have high blood cholesterol is to continue care with their primary health care provider and adopt an eating pattern that supports their cardiovascular health.