Squiggy, a chicken that allows children to pet him, vanished last week. The animal shelter says it's unlikely that a predator snatched him 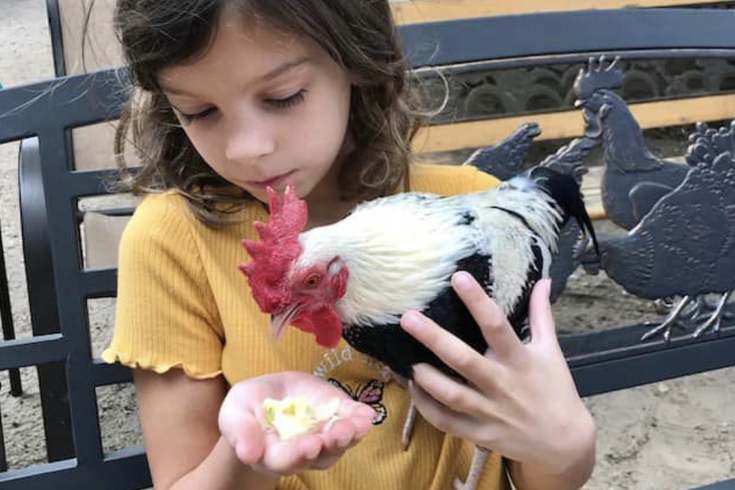 Squiggy, a rooster at Funny Farm Rescue in Hamilton Township, New Jersey, has been missing since Tuesday. The farm is offering an $1,800 reward for his safe return.

A rooster belonging to Funny Farm Rescue has been missing for nearly a week, prompting his caretakers to offer a $1,800 reward for his safe return.

It's not just any rooster, though.

The animal rescue farm, in Hamilton Township, New Jersey, describes Squiggy as "the most famous little rooster in the world," a fine fellow who was raised indoors with cats and dogs. Squiggy evidently "thinks he's a kitten" and is amenable to taking a nap while he's being pet by people who come to visit him.

"Little kids and families came from all over the world to see him," Funny Farm Rescue wrote on Facebook. "They will all be so sad when they come here and he's not here."

Squiggy was last seen on Tuesday, during what was a busy day at the farm.

"We do not think a predator got him as he hung out mostly by the stage area where there were lots of people," the farm said.

If a thief snatched him, Squiggy is likely to have very loud thoughts and feelings about the situation.

"He cockadoodle-do's all day and night," the farm said. "A big voice from that little head."

Funny Farm Rescue is reviewing camera footage to help figure out what happened to Squiggy.

The farm, founded more than 20 years ago by Laurie Zaleski, is home to more than 600 animals including pigs, horses, dogs, cats and more unusual creatures like an emu and a skunk. Some of the farm's animals are adoptable, and most are allowed to roam free and walk right up to visitors. The farm is one of the largest animal sanctuaries in the Northeast.

Squiggy is a permanent resident of Funny Farm Rescue. Roosters typically are aggressive with people, but Squiggy's upbringing gave him a docile character.

If Squiggy is returned, the farm says it will not ask any questions and will not pursue any charges.

Anyone with information on Squiggy's whereabouts is asked to call or text Zaleski at (609) 742-9410.