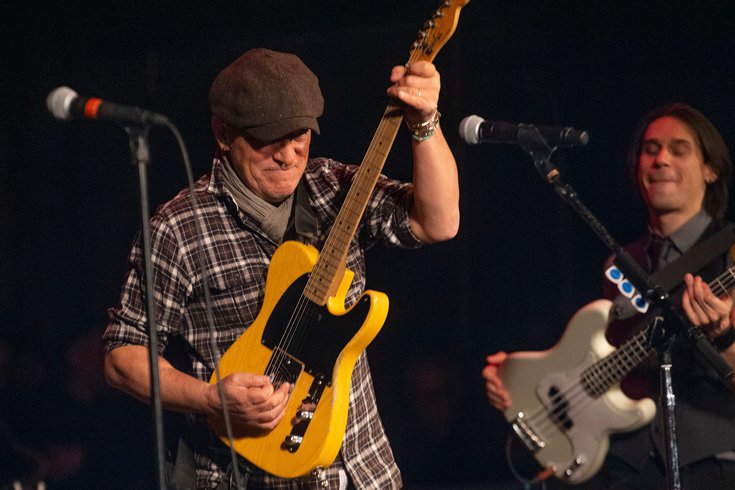 The Boss would have been the logical choice in renaming the Garden State Parkway's service area in Monmouth County.

When Gov. Phil Murphy announced Tuesday that nine Garden State Parkway rest areas would be renamed after members of the New Jersey Hall of Fame, there was a notable omission from the list: Bruce Springsteen.

The singer-songwriter is arguably New Jersey's most recognizable and well-known public figure. Many of Springsteen's hits are centered around growing up in New Jersey, and he's spent most of his life living in various towns across Monmouth County.

In fact, one of the Garden State Parkway's service areas is located in Monmouth County, just miles away from notable Jersey Shore towns like Asbury Park, Belmar and Long Branch, where Springsteen roamed and drew inspiration from as his career began to take off.

Springsteen was raised in Freehold and now lives in Colts Neck, two towns that are located further west in the county.

So given how synonymous Bruce is with New Jersey, it was a bit shocking for many, myself included, to see that he was not one of the nine local icons unveiled Tuesday.

As it turns out, it appears that The Boss was not interested in receiving the honor.

"Bruce Springsteen respectfully declined to have a service area named after him," a spokeswoman for the New Jersey Hall of Fame told the Bergen Record. So it was not a snub by the state, after all.

Despite Springsteen declining the offer, the New Jersey Turnpike Authority had no shortage of options to choose from when it came to selecting the nine state hall of fame inductees who would have their names imprinted on Garden State Parkway service areas.

The nine local icons selected consist of public figures from the arts, entertainment and sports who have connections to New Jersey.

Singer Frank Sinatra's name will grace the Atlantic Service Area in Atlantic County. Author Toni Morrison will be honored at the Ocean View Service Area in Cape May County. Below is the full list of honorees and service areas.

Murphy said that renaming the rest areas after state hall of fame inductees is part of an effort "to showcase the outstanding talent of the people of New Jersey and their contributions to the world."

"This is about putting New Jersey greatness on full display," Murphy said.

Each service area will also be outfitted with exhibits similar to those seen at Hard Rock Café locations. The exhibits will consist of posters, artifacts and an interactive Wall of Fame featuring a life-sized video monitor that will show over 200 biographical vignettes of every hall of fame inductee and their acceptance speeches.

The New Jersey Turnpike's 12 rest stops are all named after historical figures with ties to the state, according to the New Jersey Turnpike Authority. Among those honored include former President Woodrow Wilson, founding father Alexander Hamilton and Pro Football Hall of Fame head coach Vince Lombardi.

The New Jersey Hall of Fame has a network of exhibits set up across the state in partnership with Battleship New Jersey, NJ Transit, the New Jersey Motor Vehicle Commission, Newark Liberty International Airport and the Meadowlands Chamber of Commerce.