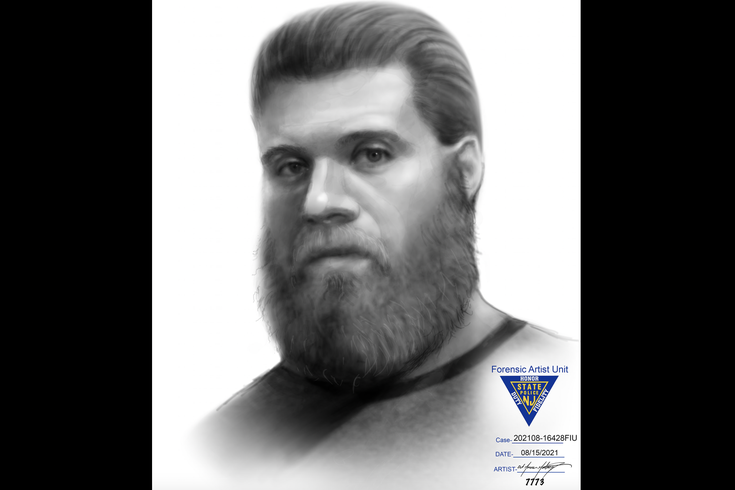 A composite sketch shows a man who two women say pulled them over and impersonated a police officer. The first incident happened in Brick Township, Ocean County, on Aug.1. The second happened two days later in Wall Township, Monmouth County.

New Jersey State Police are seeking help from the public to identify a man they say has been impersonating a police officer and recently pulled over two women in different parts of the state.

Investigators shared a composite sketch of the suspect on Monday and described the two incidents that happened earlier this month.

Around 2 p.m. on Aug. 1, a woman in Brick Township, Ocean County, pulled her car over to the side of the road after she saw an apparent police vehicle was following her. The car was a black, older model Ford Crown Victoria with a blue dome light on the front windshield.

The suspect approached the vehicle and identified himself as a police officer, but the woman became suspicious after a brief exchange and asked the man for identification, authorities said.

When the suspect refused to provide ID, he allegedly ordered the woman to leave her vehicle and she refused. At that point, the suspect attempted to remove the woman from her car, but she managed to flee the scene and later reported the incident, police said.

During a subsequent investigation, police learned of another incident on Aug. 3 in Wall Township, Monmouth County. Another female victim reported that a man in a black, older model Ford Crown Victoria pulled her over and impersonated a police officer.

State police described the suspect as a white male between 40-50 years old, with long red hair pulled back in a pony tail, a red scruffy beard and tattoos on both arms and the back of his hands. The suspect was last seen wearing black tactical pants, a light blue, short-sleeved shirt with the word "police" on the front and non-descriptive patches on the arms that also said "police," but did not name any specific department.

The suspect also was wearing a duty belt and a holster with what appeared to be a black handgun, state police said.