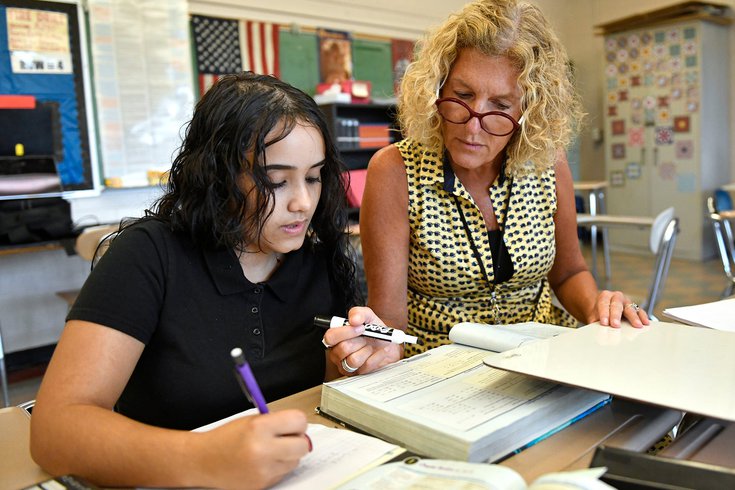 Sonya Bertini, a bilingual special ed teacher at Vineland High School, works with a student in the classroom.

New Jersey slipped seven spots from No. 12 to 19 on U.S. News & World Report's annual "Best States" rankings, but no one can blame the state's education system for that dip.

The state's higher education system was ranked No. 27 in the U.S. More than 47% of New Jersey's population is college-educated. The average undergraduate pays nearly $14,000 for in-state tuition. New Jersey college students have more than $33,000 in debt upon graduating, which is higher than the national average of nearly $29,000.

Gov. Phil Murphy took credit Tuesday for New Jersey's top educational ranking, noting the $1.5 billion in funding that has been provided to schools since Murphy took office in 2018.

"Today's recognition by U.S. News & World Report proves that students across New Jersey — starting with our youngest learners — are given the opportunity to achieve long-term success," Murphy said in a statement. "I would also like to thank the educators who work tirelessly to make sure that our students receive the best possible education."

The state also earned high marks from U.S. News & World Report in both health care (No. 4) and crime and corrections (No. 5).

New Jersey's overall drop in the rankings from No. 12 to 19 can likely be tied to fiscal stability and infrastructure, two categories in which the state ranks in the bottom 10 in the nation. Only Illinois' fiscal standing is worse than New Jersey's, according to the rankings.

The "Best States" rankings, were less kind to Pennsylvania. While the state moved up one spot overall from No. 41 to 40, Pennsylvania did not rank in the top 10 of any categories.

Pennsylvania's school system came in at No. 37 in the U.S., including dead-last for higher education. With nearly 41% of the state's population college-educated, the average Pennsylvanian has over $39,000 in debt upon graduation, which is second to New Hampshire for the most in the country.

The state also earned low marks for in-state tuition and fees (No. 48), as well as graduation rates at two-year colleges (No. 36). Pennsylvania's public high school graduation rate is 85%.

Pennsylvania's best ranking was at No. 11 for opportunity, a category which evaluates states based upon the resources they provide residents to succeed. Pennsylvania was among the top 15 in affordability, and the state's cost of living index and poverty rate are both below national averages.