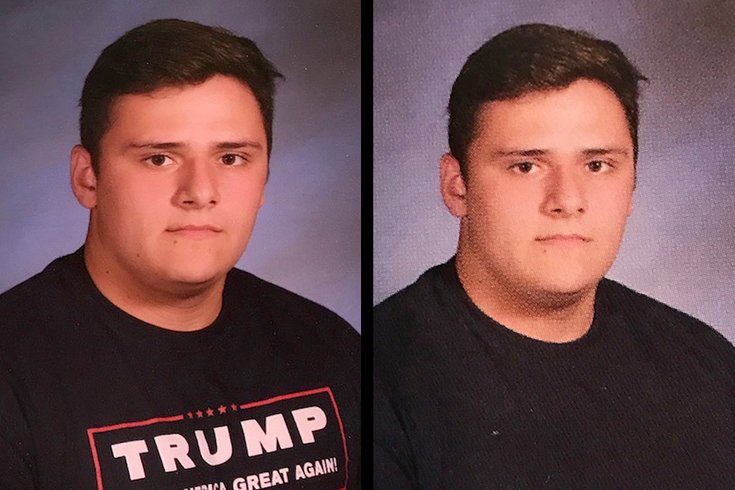 School district officials in Wall Township took action Monday in the wake of a controversial mix-up over the digital removal of Donald Trump references in student yearbook photos and quotes.

In a statement to NJ 101.5, Wall Township Superintendant of Schools Cheryl Dyer confirmed Monday that Susan Parsons, the advisor in charge of yearbook production at Wall Township High School, has been suspended amid an ongoing investigation.

Further details about the suspension and the investigation were not disclosed, and Dyer did not immediately respond Monday to an email from The Associated Press seeking further comment. The AP said a spokesman for Jostens, the company that takes the photographs and prints the yearbooks for the district, also did not respond to requests for comment.

"This has gotten absurd, quite frankly, the fact that it happened" Joe Bernardo, father of the student whose "Trump: Make America Great" T-shirt was rendered all black, said Monday morning in an interview with NJ 101.5. "I think what needs to occur, what I'm asking for, is the yearbook gets reissued with all of the orginial pictures and the quote that was missing and that there's a letter from the administration—or the teacher who was involved, or whoever was involved; it could be students, right, there's a committee—basically explaining why."

Dyer issued a statement over the weekend calling the allegations "disturbing" and reaffirmed that the district "does not condone any censorship of political views" on the part of its students.

"The administration and staff of the Wall Township Public Schools strongly value the principles of free speech and inquiry in our schools and society, viewing them as the bedrock upon which our community and educational system is built," Dyer said.

Wyatt Dobrovich-Fago, the second student whose photo was altered, criticized the yearbook staff during a Monday morning interview on "Fox & Friends."

"When you put all of these stories together, there's definitely something going on," Dobrovich-Fago said. "There was a deliberate attempt to censor and silence someone's freedom of speech."