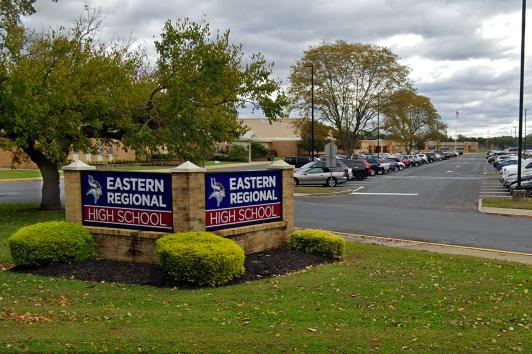 Bryce Dershem, the valedictorian of Eastern Regional High School in Voorhees, says school officials tried to censor him during his graduation speech.

While delivering his speech to his classmates at Eastern Regional High School's graduation last week, Bryce Dershem's microphone cut out as he referenced his decision to come out as queer.

Dershem, 18, and the valedictorian of the Vorhees, Camden County school, has accused school officials of censoring him. He has since said his address to the class was intended to share his experience with mental health struggles as an example of perseverance.

"After I came out as queer freshman year, I felt so alone. I didn't know who to turn to," Dershem said right before his microphone was cut off.

Video of the valedictorian address then shows Eastern's principal Robert Tull Jr. walking to the podium and taking Dersham's microphone and the written copy of his speech.

Dersham told NBC10 that Tull then removed the paper he had brought, pointed to the speech he had written for him, and instructed him to "say that and nothing else." After the exchange, the audience cheered in support as Dersham picked up where he left off. The graduate said he started reciting the speech from memory.

Dersham told the Washington Post that he had spent six months in treatment for anorexia and suicidal thoughts during his senior year. He said he hoped telling his story would inspire his classmates to persevere through rough times.

"I thought, 'I have worked this hard and I deserve to be able to tell my story and give this message of inclusivity,' because I didn't think there was anything wrong with it," he said, according to the Post.

Robert Cloutier, the superintendent of Eastern Camden County Regional School District, said the valedictorian speech writing is a collaborative process between the student and faculty.

"Every year, all student speakers are assisted in shaping the speech, and all student speeches – which are agreed upon and approved in advance – are kept in the binder on the podium for the principal to conduct the graduation ceremony," Cloutier said in a statement to NBC10.

In crafting the speech, Dersham said administrators made him remove all mentions of his personal struggles, telling him the speech was not "his therapy session." He said he felt censored and decided stay from approved script during the graduation and recite what he had written from memory

"No student was asked to remove their personal identity from any speech before or during graduation," Cloutier told NBC News.

Dershem said the school also had an issue with the gay pride flag he draped over his gown and asked him to remove it. He did not comply.