Saturday's dedication at Girard College celebrated the legacy of the Cecil B. Moore Freedom Fighters 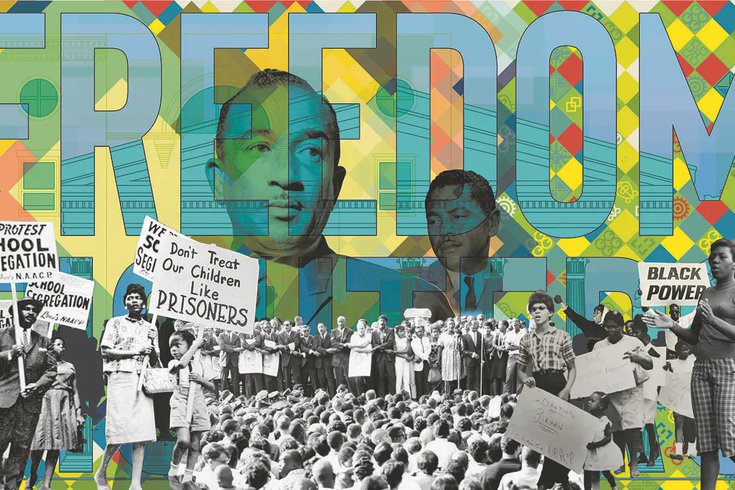 Designed by mural artists Gabe Tiberino and Felix St. Fort, "Cecil B. Moore Freedom Fighters" is on display at the intersection of N 22nd Street and N College Avenue in North Philadelphia.

In 1965, a group of activists, under the leadership of Cecil B. Moore, began picketing on N College Avenue in North Philadelphia, in an organized effort to desegregate the school and allow for Black students to enroll. This civil rights group, the Cecil B. Moore Freedom Fighters, were organized through the Philadelphia chapter of the NAACP, and eventually succeeded in ending segregation at the college.

"Cecil B. Moore, who was the president of the NAACP, said that they were going to go to Girard College and agitate, and try to push the courts and push the dialogue," said Kenneth Salaam in a documentary segment of Philadelphia: The Great Experiment. Salaam was a member of the NAACP Youth Council under the direction of Cecil B. Moore, and was one of the members of the Freedom Fighters who participated in the protests at Girard College.

Moore's position, as described in the documentary, was that Girard College was in the center of North Philadelphia, in a community filled with young Black residents who were being denied the ability to enroll in the school because of their race.
The demonstrations went on for over seven months, ending with legal action being taken on behalf of the young Black children who were unable to attend school.
In honor of the civil rights group that helped to desegregate Girard College, Mural Arts Philadelphia unveiled their newest mural, "Cecil B. Moore Freedom Fighters" on Saturday, located at the intersection of N 22nd St and N College Avenue. The mural was a joint effort by artists Felix St. Fort and Gabe Tiberino, and was originally completed at the beginning of this year.

The mural, which was dedicated on Saturday afternoon, features images from the 1960s demonstrations, features 10 Adinkra symbols, as chosen by the Freedom Fighters, to display both the timeliness of the mural as well as the historical and political significance of their determination and bravery in working to desegregate Girard College.
Adinkra symbols, native to Ghana, are used to symbolize important concepts. Those represented in the mural include knowledge, unity, perseverance, power of love, fortitude, service, democracy, justice, excellence, and encouragement, according to Mural Arts Philadelphia.

Members of the North Philadelphia community met Saturday for the unveiling, where both Tiberino and St. Fort spoke alongside some of the demonstrators from the protests. Mural Arts Philadelphia hopes that the mural will "connect today's youth with the civil rights and voter registration work of the young people from over 50 years ago," according to their website.

Gabe Tiberino, a graduate of the Philadelphia High School for Creative and Performing Arts and the Philadelphia Academy of Fine Arts, has had both murals and paintings featured in exhibitions across Philadelphia and the rest of the country.

Felix St. Fort, a graduate of the University of the Arts, has been working with Mural Arts Philadelphia for over a decade.