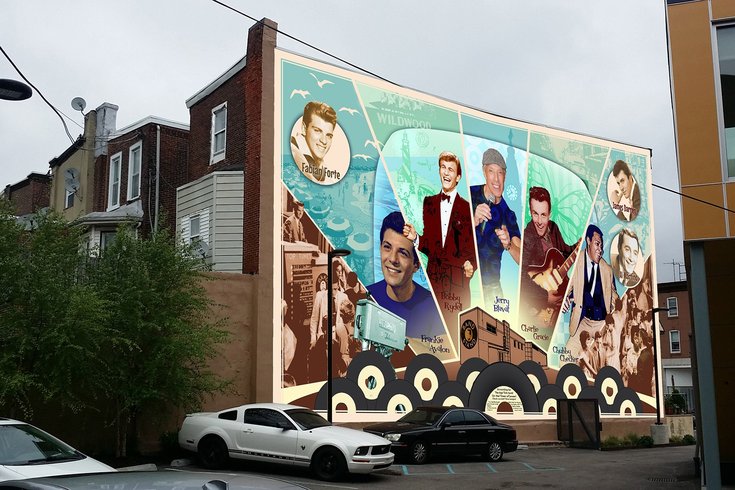 A work-in-progress rendering of the "South Philly Musicians Remix" mural, by Eric Okdeh.

Though the rock 'n' roll sounds of the Venus Lounge at Broad and Reed streets may be long gone, the Mural Arts Program's latest project aims to immortalize the ones who made those sounds so famous.

At a press conference Thursday afternoon, Mural Arts Program Executive Director Jane Golden announced the "South Philly Musicians Remix" mural, designed by longtime Philly muralist Eric Okdeh and to be installed in September, behind Valley Green Bank at Broad and Tasker streets. It's a reimagining of a mural pitched up at 1231 E. Passyunk Ave. in 2004 that has since deteriorated and cannot be restored.

"It was an iconic work of art beloved by many, emblematic of the surrounding neighborhood’s rich cultural heritage," Golden remarked at the conference. "People loved it. People came from all over the world to see it. Sadly, murals do not last forever, so we knew when it started to deteriorate that we needed to do something new. So, we’re revisiting this project in 2016 to give back to South Philadelphia and once again honor those performers with a mural that speaks to the joy their music has brought us over many decades."

Okdeh told PhillyVoice the mural is inspired by the idea of an old television frame, with color palettes taken from common themes of the 1950s and ’60s. He described it as retro, but also futuristic. He added that he spent time researching each of the artists and talking to either them or their family members when possible. 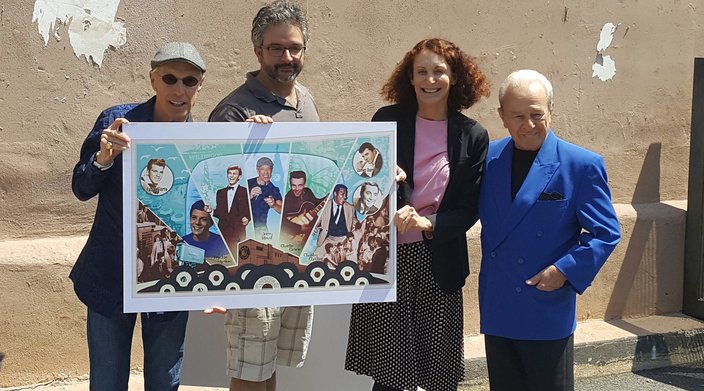 Compared to the previous mural, designed by Peter Pagast, only one element reappears.

"There is a clock in the mural and it’s kind of disembodied — the whole thing looks like images on a kitchen wall, and then you have this clock that's kind of strange, looking at it. ‘Why does that clock exist?’" Okdeh mused. "But Jerry Blavat has a saying: ‘Broadcasting from the big tick tock under the tower power clock,’ because the station is pretty much under City Hall. So that's why City Hall is in the background and reappears."

The mural will have an official unveiling on Oct. 15, when a block party, including live music and food vendors, will be held to celebrate. Part of South Broad Street will be blocked off for the occasion.

Blavat, present at the press conference, grinned ear to ear looking at the mural design.

“The thing that is so unique about South Philly, is all the people here grew up together and would go to the dances together, go to the record hops together and loved music — there were so many opportunities for them to play music and sing music, and that’s why South Philadelphia is so unique," Blavat told PhillyVoice. "The only other [scene like that] I would know is Brooklyn, where so many other rock 'n' roll artists, doo-wop stars, Little Anthony and the Imperials, the Chantels, going way back — Philadelphia is that same thing. And everybody wanted to be like the next guy.

“It’s heartwarming to know that a body of work that a human being does, their legacy, is being honored even after their death."