New ‘SNL’ brings us ‘Black Panther’ and a pregnancy announcement 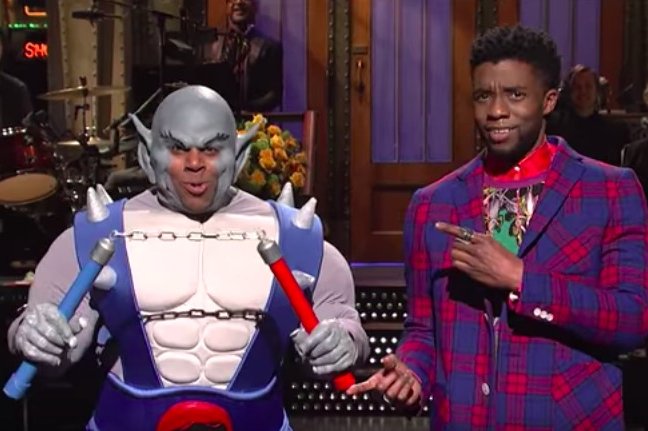 Just one day after her debut LP “Invasion of Privacy” was released (it's already slated for a No. 1 Billboard ranking), rapper Cardi B put an end to pregnancy rumors when she revealed an unmistakable baby bump while performing on the latest episode of “Saturday Night Live.”

Cardi B’s pregnancy confirmation is one of the biggest moments of the newest episode, which was already hotly anticipated thanks to its first-time host Chadwick Boseman -- aka Black Panther -- after the show’s two-week hiatus.

The cold open saw the return of Alec Baldwin as Donald Trump after weeks of the cast trying out different politically-charged openings without a Trump. Leslie Jones begins as Fox News “Outnumbered Overtime” anchor Harris Faulkner before going to Baldwin’s Trump in a meeting with the Baltic States.

Boseman’s opening monologue highlights the show’s other “Black Panther” sketches from the last couple months and how the film became a cultural moment he hopes can inspire the creation of more black superheroes. Enter Kenan Thompson.

Boseman gives us a nice taste of his James Brown impression (he played the artist in 2014’s “Get On Up”) before wrapping up.

Early in the night, Boseman appears as his “Black Panther” character T’challa, this time for the show’s recurring “Black Jeopardy” sketch. There’s a clear discrepancy in his cultural understanding of the U.S.

Aidy Bryant anchored two digital shorts during the episode, the first a commercial for pro chill Nike leggings ("Because I can't just put my naked butt on the couch") and the other when Bryant plays herself, inspired by Cardi B to be more outspoken. The result: the dawn of Aidy B.

Later Michael Che welcomed Angel (Heidi Gardner) who is described as “Every Boxer’s Girlfriend From Every Movie About Boxing, Ever.” They talked the Royal Wedding.

With not many comedy credits to his name, Boseman continued to show off his slapstick capabilities throughout the night, including a spot-on R. Kelly impersonation and one-fourth of a singing quartet with a dinner complaint.

At the end of the night, the show closed with another “Black Panther”-inspired sketch, this time making some commentary on how the movie fits into the universe of superhero fandom -- specifically if it’s okay for white “Black Panther” fans to make the “Wakanda Forever” chest move.

Cardi B performed twice in the night, first with a medley of “Bodak Yellow” and “Bartier Cardi,” during which the rapper wore a dress that carefully hid her figure.

Later she performed “Be Careful,” off “Invasion of Privacy.” About halfway through the song, the camera zooms out, showing Cardi's baby bump to the sound of audible gasps and cheers from the studio audience.

A new “SNL” is coming next week with host John Mulaney and musical guest Jack White.