Sterling K. Brown brings ‘This Is Us’ and ‘Black Panther’ to new ‘SNL’ 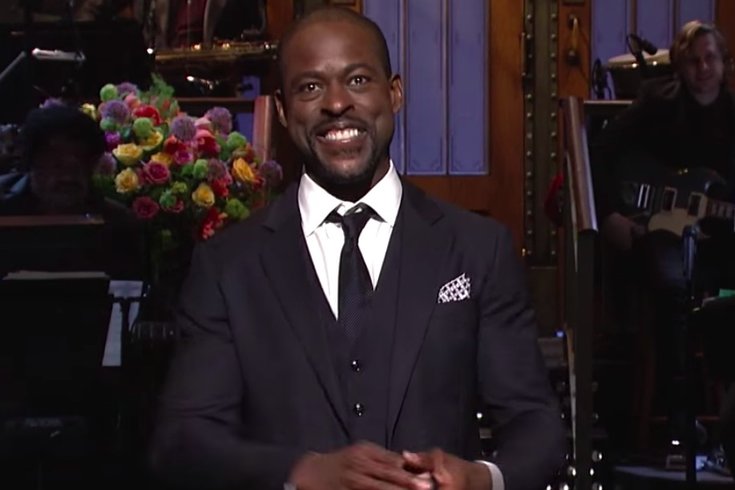 Capitalizing on the ridiculous finale of “The Bachelor” -- if you’re behind, Kelly Ripa can show you how to react -- the cold open began as a spoof on the dating show and its largely hated titular bachelor, Arie Luyendyk Jr.

Instead of Arie dumping “Bachelor” winner Becca Kufrin (played by Cecily Strong), however, it’s Kate McKinnon as FBI Special Counsel Robert Mueller that emerges, having to admit to not having a strong enough case to get President Donald Trump impeached.

The episode marked Brown's first time hosting as he promoted his recent work in “This is Us” and “Black Panther.” Brown riffs off his “This Is Us” character, Randall Pearson, and his constant emotional diatribes throughout the opening monologue. Watch out for Brown's amazing imitation of Kenan Thompson.

The sketches kicked off with a return of “Celebrity Family Feud,” this time with Oscar winners vs. Oscar losers. McKinnon’s imitation of Frances McDormand is spot on, while we get to see Brown wax poetic as Common.

Taking more inspiration from “This Is Us,” the night’s digital short markets American politics like a moving TV drama, featuring Brown as Ben Carson and the return of Aidy Bryant’s Sarah Huckabee Sanders in “This Is U.S.”

In light of the resignations coming out the White House, Alex Moffatt and Mikey Day appeared as Eric Trump and Donald Trump, Jr. at the Update desk. Later, recent “SNL” alum Vanessa Bayer -- who is also a University of Pennsylvania alum -- reprised her Weekend Update role as abysmal meteorologist Dawn Lazarus.

Brown played up his “Black Panther” connection in a sketch of a deleted scene from the movie, reimagining the Wakandan Ancestral Plane to include all of T’Challa’s ancestors -- even an uncle (played by Thompson) that everybody hates.

Toward the end of the night, Kyle Mooney starred in a remote segment where he plays Chris Fitzpatrick, a teen with a bias toward rock music who conducts prejudiced on-the-street polls to garner responses that it’s a better genre than rap, making himself look like an idiot in the process.

Newer cast member Melissa Villaseñor finally got more to do during the night’s last sketch, where she played an elderly dying woman whose last words turn into an empowered Nickleback sing-a-long.