Kelly Ripa rips into 'Bachelor' Arie: 'What's wrong with you?' 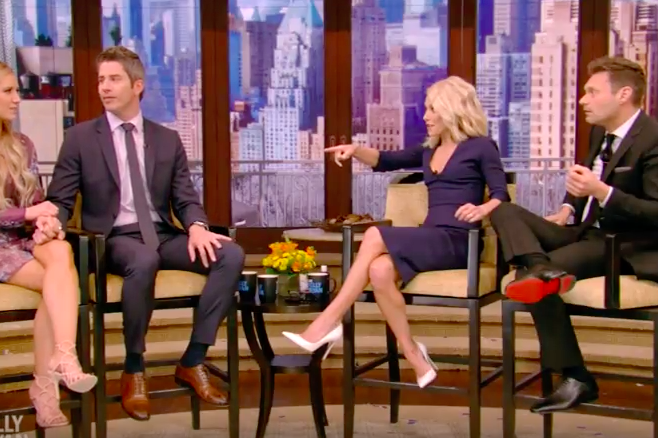 Leave it to a South Jersey girl to put "Bachelor" Arie Luyendyk in his place.

A quick recap: After proposing to Becca Kufrin at the final rose ceremony, Arie decided his unspoken — almost literally, unspoken — connection with Lauren Burnham is where his heart actually lies. So, he met with Becca, broke up with her and hung around like a gnat, asking if she wanted to talk about it. You know, exactly what you want when your fiancée says tells you he loves someone else in front of millions of people.

As expected, Lauren took Arie back. After trotting out other women from the season to give Arie a verbal flogging, Arie came face to face with Becca, who accepted Arie's sheepish apology, a decision that makes more sense now that we know she'll be the next "Bachelorette." Everyone's already on her side, might as well take the high ground. Then, Lauren accepted Arie's second attempt at a marriage proposal to muted cheers.

It's customary for "Bachelor" and "Bachelorette" couples to make the ABC rounds after the finale, but they're usually not on such controversial footing when they make their appearances. After some light needling from Jimmy Kimmel and a snooze-inducing interview on "Good Morning America," it was time for "Live with Kelly and Ryan," with Stratford, Camden County, native and Eagles fan Kelly Ripa.

According to my mom a source who watches the show regularly, Ripa has never been a fan of the whole "Bachelor" concept anyway. So, giving her a face-to-face with the guy who just became public enemy number one was like putting a sheep in a lion's den, if the sheep had the permanent facial expression of someone who just abruptly woke up from a nap.

I won't waste time detailing Arie's responses, which you can watch below. He's maintained the same explanation for his actions since the show ended: He felt pressured to propose at the final rose, even though he wasn't ready. His relationship with Lauren developed later in the show, which is part of the reason he didn't initially pick her. He asked Becca's permission to reach out to Lauren while they were still engaged. He did, on Tuesday night, say to Becca's face that what he did was wrong and accepted responsibility.

But man, Ripa had a field day with him. Some highlights:

• On how he decided whom to initially propose to: "Was it a coin toss, or was it a name in the hat?"
• On posting a picture of a gift from Lauren while engaged to Becca: "Shady, shady."
• On his claim that he and Lauren weren't directing messaging each other during the engagement: "I don't believe that."

The whole thing is fantastic and you can watch it below.