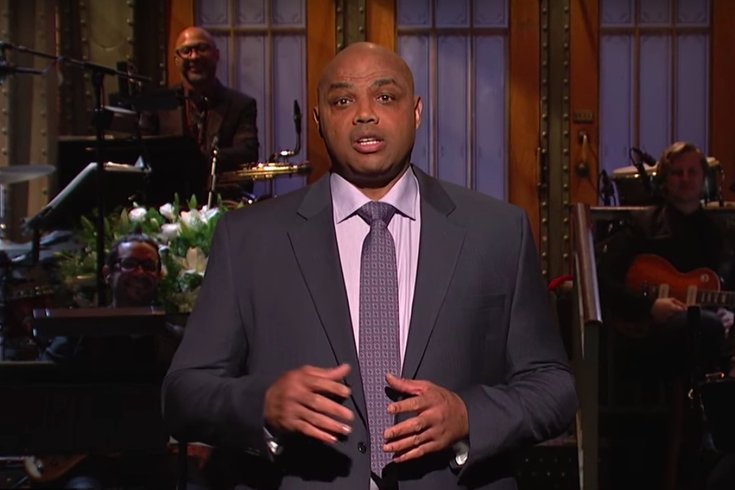 Also returning was Alec Baldwin, who appeared in the episode’s cold open to once again impersonate the president -- a character we haven’t seen since Kevin Hart hosted the mid-season finale in December.

This time Trump was at the bipartisan gun control meeting, the sketch taking aim at Trump’s compassion to-do list and heroic fantasy of running into a school under attack, unarmed.

Saturday’s episode marks Barkley’s fourth time hosting the show. In his opening monologue, he touched on the “Shut up and dribble” rhetoric that’s been targeting some athletes after a Fox News anchor took aim at LeBron James.

“I’m an athlete, and athletes have been speaking out a lot this year. They’ve been kneeling during the anthem, refusing to go to the White House, and a lot of athletes are worried speaking out might hurt their career,” he said.

“Well, here’s something that contradicts all of that: me. I’ve been saying whatever the hell I want for 30 years, and I’m doing great. I’m hosting ‘SNL’ for the fourth time, for no reason. Lorne Michaels just wanted somebody to talk to about ‘Black Panther.’”

In anticipation of the 90th Annual Oscars ceremony being broadcast Sunday night, the show created its own awards -- the “Grabbies” -- in light of the wave of sexual assault and misconduct allegations that have changed Hollywood in recent months.

In a digital short, Barkley arms cockroaches with assault rifles to help kill the “bad” roaches that infest your house.

“Only the best, god-fearing roaches can carry a gun,” he says. “And none of my roaches are gay.”

Later in the night, Barkley played himself in a sketch that also features cameos from Alex Rodriguez and Keenan Thompson as D.C. Timmons to talk NFL concussion regulations, Timmons making it clear why they should be enforced.

Weekend Update had a lot to catch up on during the hiatus, kicking off with Hope Hicks’ White House resignation.

“You know things are bad when a 29 year old with no experience, who works directly for the president of the United States, thinks, ‘I gotta get out of this dead-end job,’” said co-host Colin Jost.

Moving on to talk about the NRA and DICK’s Sporting Goods’ move to stop selling assault rifles, Michael Che goes into why hunting should stop being considered a sport.

“I’ve never seen a deer get shot then grab his side and say, ‘Good game.’ Can’t just make terrorizing animals a sport because you like to do it,” he said.

“Shooting animals for fun is wrong -- it’s not a sport. There are easier ways to feel strong and make your heart race, like smoking crack… You won’t need a gun if you just eat rice.”

Cecily Strong soon appears as Hicks, reading a statement to all her friends from her “semester abroad at the White House.”

Kyle Mooney then comes on the show to talk Oscar buzz, clearly not invited to Jost’s watch party. Leslie Jones also appears to go over her time spent in South Korea for the Olympics, joined by a real Olympian onstage.

The recurring “Last Call” sketch was the last of the night, Barkley and Kate McKinnon intermittently breaking character as they drunkenly flirt at a bar.