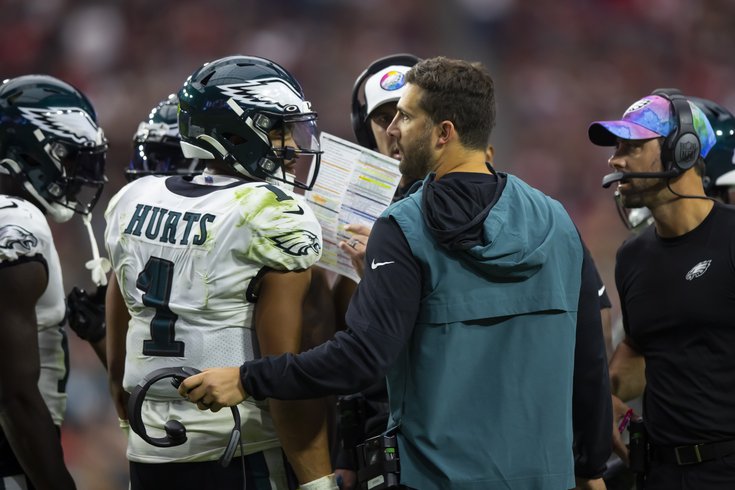 Jalen Hurts and Nick Sirianni will try to get the Eagles back in the win column against the Indianapolis Colts.

Nobody is winning anything. Somehow that translates into the world hating Philadelphia, but only if you have a small brain.

For decades, I was told by the sports radio in town that we have the smartest fan base in the country. How do we know that? What baseline is there to determine? Is it how much we watch of our own teams or simply how much sports we consume on a daily basis? How much we spend on our teams? How often we fight over our teams?

I am reminded each year that we are actually not the smartest fan base, simply because Twitter, people who listen to the radio, and the rest of the “sports isolationists” (people who never watch the league in which their team plays unless it’s their team playing) can’t understand a regular season unless it’s played in 16 games.

From there comes the uninformed lobbying of personal attacks on people who vote, because the person waiting on hold for six hours to talk to Angelo Cataldi knows more about the NBA than the person who voted for Nikola Jokic.

It happened again this week. Joel Embiid had a monster first half performance and people were bitching and complaining that he wont win the MVP on Twitter. The next game out he and the rest of the team laid an egg against the... Thunder.

I told you weeks ago on this very platform that Jalen Hurts will not win the MVP. Most of you discarded it and are probably fuming right now that he wont win it. You don’t listen. More importantly, you don’t listen to people who are doing more work than you.

The person at the AP who is voting for an award watches more football than you. He probably understands the game better than you. Has more access to coaches and GMs, and their fundamental understanding of how a team works isn’t reduced to a fluff piece on the head of security.

The problem is that seasons are being reduced to whether or not a guy wins an MVP. Sometimes because people already know – like with the Sixers – their team is just not a contender. They need a consolation prize.

That’s the loud yet empty noise that surrounds Embiid’s bid to win the MVP every year. He’s a special player, fantastic at his best, does things that haven’t been seen in a long time – but so do a bunch of other guys in this league. Go ahead and reduce what Jayson Tatum, Luka Doncic (who we told you last year were going to be the main two favorites this year), or anyone else because Embiid isn’t winning the MVP.

You’ve done the same in the NFL. Asking the world to respect you as an Eagles fan yet completely disregarding anything that may put this team in a negative light. Hurts lost the MVP when he got hurt. It’s that simple. Is it unfair? Probably, but he’s not around long enough to get that break. Veterans get veteran calls, and Patrick Mahomes is going to answer the phone.

Does that mean the Eagles season is over? No, of course not. But there is this major sense of deflation that turns into – mostly on fake places like social media – this huge robbery. Like the NFL is stealing an award away from Hurts.

The league is going to sweep away what Hurts did for the majority of the season for two big reasons. First, they simply never believed in the Eagles. That may hurt or upset you, it frustrates me as a fan, but it’s the honest truth. You are more than free to reach out to people in and around the NFL, former players to current analysts to beat writers. You are free to take the time I did in asking people, on and off the record, with or without platforms. Maybe you will be told something different.

I was told the league never believed the Eagles were legit. They, like the Vikings, were taking advantage of amazing circumstance more than just kicking everyone’s ass. Again, not the easiest thing to take as a fan, but it’s what my general consensus found.

The other thing that hurt this MVP run was how good the team looked outside of Hurts, despite not having Hurts on the field. The Eagles were penalized for losing two games they should have won. It started to show cracks in the team and the coaching staff.

But isn’t the fact they lost those two games even more of a reminder of how Hurts’ value?

That’s the rub. The way in which this team lost while another team – on its third-string QB – never missed a beat. If you are truly upset that Hurts isn’t winning the MVP, or Nick Sirianni isn’t winning the NFL Coach of the Year, look no further than the 49ers.

The entire NFL world sat on its collective couch and watched the Niners staff and players rally around whoever was the QB. The coaching staff never put Brock Purdy in positions that Gardner Minshew was in. The players around the backup in San Fran didn’t look lost or like they never heard a play being called…. In a home game huddle.

The Eagles fell apart without Hurts and it will cost the team two major awards. Most likely the MVP — not truly being the fault of anyone — while the Coach of the Year is going to Brian Daboll – or possibly Doug Pederson.
That’s what a Coach of the Year does – rally.

The Eagles have put themselves in a weird position where it feels like they took two weeks off before cramming for a final exam. You may get a sense of relief after taking that exam, but your procrastination habits don’t change.

The Philadelphia Eagles have put themselves in a win-now mode. They passed on their former HC, QB, and a couple of other early investments to make this thing work. Well, they did. Heading into the playoffs with the first round bye, the best way to shove it back to the NFL would be to win the damn thing.

Anything else is a major disappointment.