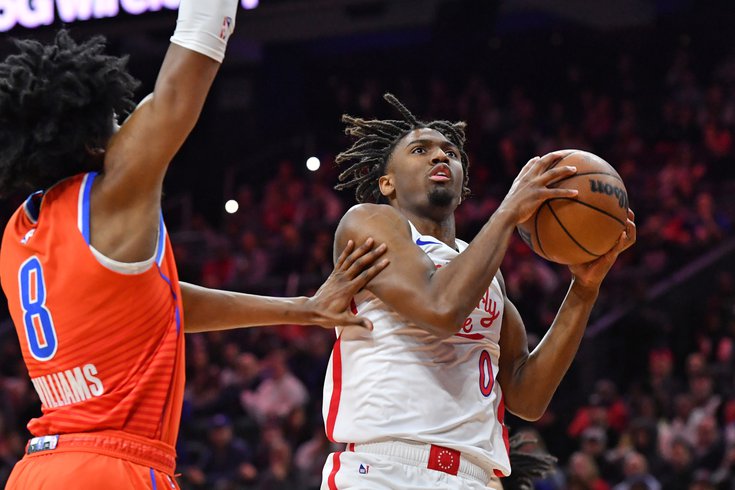 Tyrese Maxey and the Sixers ran out of gas against the Thunder.

The Sixers paid for a lethargic first half and never quite pulled themselves together on defense, losing a 133-114 stinker to the Thunder in their final game before a west coast road trip.

Here’s what I saw.

• It was a mixed bag for Paul Reed in this game, and you can tell that he hasn't had a regular role with this team for a while. There were some miscommunications and misreads by Mr. Bball in this one, including one exchange with Harden that saw the veteran guard chewing him out for not coming up to set a screen.

That being said, at least he brought the requisite effort to this game. Better than basically all of his teammates on that front.

• The Sixers did not exactly get off to a flying start in this game, and there were times when you had to wonder whether they actually read the scouting report for the team they played. They gave a lot of respect to players who frankly did not deserve it, closing hard on non-shooters (or bad shooters) to open up driving lanes and cutting opportunities for the Thunder. Philadelphia inexplicably treated Jaylin Williams as a credible threat from deep, and he punished them with some quick bursts to the rim.

(Jaylin Williams, not to be confused with Jalen Williams, by the way.)

Their lack of focus to start the game immediately cost them in the foul department. Embiid and Harden were lazy on both ends of an entry pass, Harden tossing an iffy pass into a big man hardly interested in sealing off Shai Gilgeous-Alexander. When SGA tipped the pass away from him, Embiid went barrelling into Lu Dort for an easily avoidable first foul. His second foul came on a more questionable call, one Doc Rivers might have wanted to consider challenging, but the damage had been done.

Perhaps Embiid should have taken his normal foul trouble approach, which is to say he probably should have just let some lesser players score rather than make wild contest attempts at the hoop. When the big man was baited into his third by Darius Bazley five minutes into the second quarter, Doc Rivers had seen enough, and Embiid got a seat next to him on the bench for the rest of the half. That was a killer for Philly, who could at least resort to tossing lobbed entries over the top to Embiid as he towered over a small-ish Thunder team.

With or without Embiid, this was not a serious and committed effort from Philadelphia to open the game. James Harden had some egregious moments of non-effort on the defensive end, whether in the halfcourt or transition, just flailing at the ball or never getting to the spot. De'Anthony Melton and Tyrese Maxey were both undisciplined in their attempts to guard Shai-Gilgeous Alexander, and the former was particularly disappointing in that matchup relative to expectations.

Did they take this game too lightly because of how soundly they beat them on New Year's Eve? Maybe, but it was clearly the wrong approach to take. The Thunder are not the Pistons, and you were unlikely to get another SGA stinkbomb in the second meeting. The Sixers paid for their lack of seriousness in the first half, and it wasn't a whole lot better in the second.

• Tremendously weird game for Joel Embiid. There were highlight plays, including a huge block of SGA st the rim in the second half, and he was relatively efficient when he got his touches on offense. But he was never really able to settle into this game until late, in part because of foul trouble but also as a result of a few other factors.

One thing to keep an eye on: Embiid stepped on a Thunder player's foot in the third quarter, briefly hopping around the floor and limping before eventually walking it off. And I do mean walking in a literal sense — an Embiid-centric lineup with Harden on the bench struggled mightily down the stretch of the third quarter, with the big man hardly moving during most of that run. Oklahoma City was able to open up a bigger lead as Embiid struggled to leverage his matchup advantage against Mike Muscala, and his former Sixers teammate made Philly pay on the other end, hitting some threes with the Sixers struggling to offer a proper closeout on him.

(I say "the Sixers" and not just Embiid there because Philly did have some moments where they threw two on the ball at SGA and then screwed up the rest of the floor. Shake Milton just simply walked away from Muscala after Embiid had forced the ball out of SGA's hands at one point, which is another one of those examples where you wonder if a player read the scouting report.)

Subpar games for Embiid are still quite a bit better than most good games around the NBA, of course. Frankly, it felt like the Sixers' execution was off by just a hair at times, with Embiid establishing good position against a favorable matchup, only for the ensuing pass to end up just outside of his catch radius. There were probably 3-4 plays where a pass tipped his outstretched fingers around the paint, plays that would have at least earned a foul call on a catch, if not a dunk or a layup.

Down the stretch, given a chance to finally string some minutes together, Embiid made the Thunder pay for leaving Muscala on an island against him, putting himself on the free-throw line over and over again. By that point, it was too little and too late.

• James Harden has had more games where he has been "on" as scorer this season than I can remember him having all of last year, including games from the end of his tenure with the Brooklyn Nets. Even if the numbers conflict with that idea — never tell me the odds, word to Han Solo — it just feels like Harden has more outs on every individual possession. With their starting lineup on the floor, the Sixers got nearly any shot they wanted to get, and that was a credit to the work Harden was putting in.

We've discussed it a ton here lately, but Harden has made some genuine strides as an off-ball cog in this offense, understanding that he has to remain locked in at all times. There are more frequent relocations by Harden to open up space for an Embiid pass over the top, and certainly more catch-and-shoot jumpers in the flow of the offense. That has helped him add more value on top of all the work he does on the ball, where his production is obvious to anyone watching the games.

They are certainly not a defensive juggernaut, but the Thunder have at least one real stopper on defense in Lu Dort, and that put a big Harden performance in doubt from the start. In the circumstances, I thought he was excellent as a scorer, and he helped keep them in this game when it looked on the verge of slipping away. There were some electric moments for Harden in this one, including a four-point play where his shot somehow managed to squeak in after a few bounces.

On the other hand, this was a James Harden game where the mistakes and bouts of laziness weighed just as heavily as his offensive outbursts. Hard to credit him for all of the good while absolving him for problems he contributed to.

• Regular readers know I am plenty skeptical of Matisse Thybulle, the alleged plus-minus king of the Sixers, but this is certainly a matchup where you could use his defensive gifts against SGA. Curiously, Rivers opted to play him in the first half when SGA wasn't on the floor, which is a decision I don't really understand. If you're going to play the Thybulle card, why wouldn't you do so against the opponent's best player, a guy he slowed down in the previous meeting between the two teams?

That's a coaching decision worthy of some derision, and one he only sort of corrected in the second half.

• Tyrese Maxey is going to have to find the shooting touch at some point, because the concept of the current starting lineup sort of rests on the idea that he's a dangerous off-ball threat. I think he certainly looks better/faster off-the-bounce as he gets his legs under him post-injury, but they badly need him to find the range to keep things open in the middle of the floor.

• If P.J. Tucker is going to sprint past Josh Giddey at the three-point line and miss weakside rotations that lead to layups, I'm not sure what the argument is to keep him on the floor. Terrible stuff throughout this one.

• Rough game for Shake Milton. Felt like he was just driving the lane and throwing up prayers.

• There was a scary moment for the Sixers in the first half, with Tobias Harris crashing to the floor and grabbing his knee, sitting in the corner for what felt like an eternity. He was able to come back in the game, but I never thought he reestablished himself after returning to the floor, his promising start vanishing somewhere on his walk to the locker room with the trainers.

• Somebody was vaping courtside underneath the basket during this game, which is certainly a decision you could make.

• SGA was the best player on the floor and the biggest reason this game tilted toward the Thunder. Whatever you want to say about effort, focus, etc. on Philadelphia's end, their stars got outplayed by the best guy on the other team.