What you missed in Sixers vs. Pistons: a James Harden triple-double, and Reed vs. Harrell

Everything you missed in the Sixers; win over the Pistons while you were watching the Eagles. 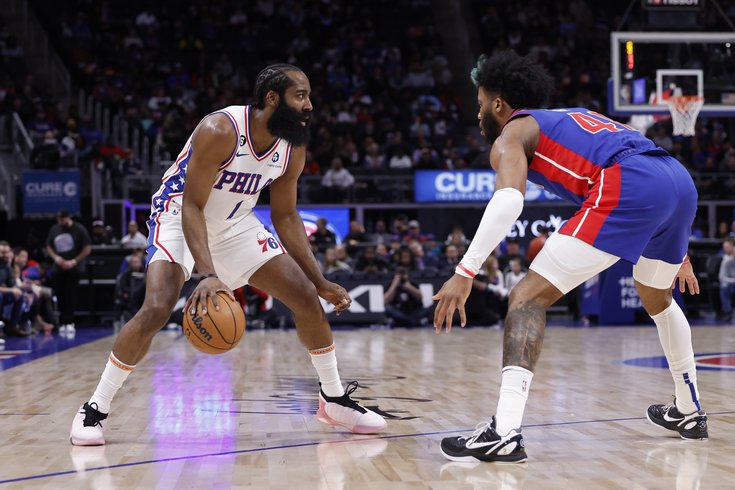 While most of you were waiting to see if the Eagles would finish up their push for the NFC's No. 1 seed, the Sixers had a very different battle on their hands on Sunday. And like their football friends, the Sixers took care of business, beating up on a hapless Pistons team to improve their record to 24-15.

Here's what you missed, assuming you didn't fire up the DVR for this one (and I can't imagine why you would have.)

The big story: Backup centers lighting it up

Montrezl Harrell vs. Paul Reed continues to fire people up who follow this team, and for good reason. The Sixers have rarely, if ever, had reliable play behind Joel Embiid, causing Philadelphia to crater whenever their franchise center hits the bench. Against Detroit, the Sixers had both of their fill-ins playing well, which will only lead to more arguments about backup center in the weeks to come.

At least this problem is a good problem to have — Harrell (20 points) and Reed (16 points) combined for basically one Joel Embiid's worth of scoring on Sunday in Detroit, going about their business in much different ways.

You all know by now what the game is going to look like for Harrell, and the Sixers did not overcomplicate things against a Pistons team missing Jalen Duren. Harrell and James Harden lined up for pick-and-roll after pick-and-roll, and Harrell was ruthless out of that look, walking right down the middle of the floor for easy bucket after easy bucket.

It's easy to chalk all of that up to Harden, and their bearded playmaker was on a level by himself on Sunday, carving up Detroit however and whenever he wanted. But Harrell deserves his share of the credit for soft hands and fluidity coming out of a screen. He routinely digs out passes that come in around his knees, gathering and going up for a dunk all in one motion. This is much harder than Harrell makes it look:

The other end of the floor is a bit of a disaster, truthfully, and it's why there are so many skeptics of Harrell as a playoff player. We've seen this movie before, on a Doc Rivers team no less, where Harrell was leaned on too heavily and exploited for his weaknesses in the postseason, helping to derail a talented Clippers team.

On Sunday, Harrell's lack of rim protection and some shaky decision-making in space nearly wiped out an awesome scoring performance. Pistons starting center Isaiah Stewart matched his scoring total with 20 points, and there were periods of this game where both teams were just trading buckets, Harrell and Stewart equally unprepared to offer resistance at the rim.

Reed, to his credit, was about as good as you could hope for on offense, to say nothing about his superior defensive work and rebounding compared to Harrell. It took a little while for Reed to figure out his niche and commit to a role in Philadelphia, with the coaching staff drilling into his head to keep things simple. He looks comfortable and assured in that center spot now, running the floor and rolling hard while crashing the glass and making quicker reads as a passer.

This is, without qualification, the most important play I think I've seen Reed make in the pros. The ball hits his hands and quickly moves to a cutting Shake Milton, who swings it to the corner for a terrific look from deep to end the possession:

These plays have been more common this year, and if anything, Reed has skewed a little too far toward quick-hitting passes on the offensive rebounds he creates, leaving some layup/dunk opportunities on the table. Reed is unlikely to match Harrell's scoring ceiling or replicate some of his traits, like those soft hands, but he can deliver an appealing package regardless, adding some switchability to the lineup while showing continued growth and maturity on offense.

If anything, the Sixers probably need to find a way to get him on the floor even if Harrell is playing the backup center minutes. I'm as reluctant as everyone else is to see Embiid playing next to non-shooters, but on a team that consistently struggles to rebound, Reed consistently does well for himself on the glass, offering length, athleticism, and determination they could use to change the tone.

I think this battle is far from over, though Harrell appears to be in the driver's seat right now thanks to a strong run of play on offense.

There are triple-doubles that overstate a man's performance, but this wasn't one of them. Harden picked up his 10th assist on Philadelphia's first possession of the second half, cruising into the 71st triple-double of his career. When the Sixers exploded at the end of the first half to effectively put this game away, it was Harden at the center of everything.

Everything you could have hoped for in this one, Harden delivered. He roasted favorable matchups in the halfcourt, attacking guys like Kevin Knox on switches for some easy buckets of his own. The pace of play was awesome, with Harden getting Philly moving on Pistons misses and turnovers to exploit their leaky transition defense. And his pick-and-roll combination with Montrezl Harrell, aided by some poor efforts on Detroit's end, was about as good as it gets, with Harden threading beautiful passes into the painted area to make life easy on his starting center du jour.

Harden had total control of this game, delivering a win they never had to sweat in the second half. Awesome outing for him.

• Tyrese Maxey's scoring burst at the end of the third quarter was a beautiful thing, with Maxey lighting up poor Killian Hayes to close out the period with style. Though his outside shot wasn't there for most of Sunday's game, Maxey's speed and start/stop ability looks to be coming back, and he used it to great effect against Detroit.

• This was about as well as Matisse Thybulle could play while having a poor night on offense. I am skeptical Reed/Mattise Thybulle lineups will work on offense against a real basketball team, but those two can cause total chaos on the defensive end, as evidenced by Thybulle's five (!) steals against Detroit on Sunday.

• Easy regular season wins without your best player should not be taken for granted.

• I can't believe there was a debate on the broadcast over whether Georges Niang committed a flagrant or not at the end of the first quarter. He smacked a guy in the head on a full sprint. Whether he wanted to try to get the ball or not, it was an easy flagrant one to call.

• De'Anthony Melton committed two different backcourt turnovers that probably drove Doc Rivers crazy. Playing with pace and trying to get up the floor is admirable, but you still have to keep an eye on where the defenders are.

Bad game for Melton in general, and I guess he was probably due for one of those.

• Troy Weaver getting an extension for putting together this Pistons roster remains one of the most baffling developments of the season. Missing Cade Cunningham or not, they are a brutal watch.