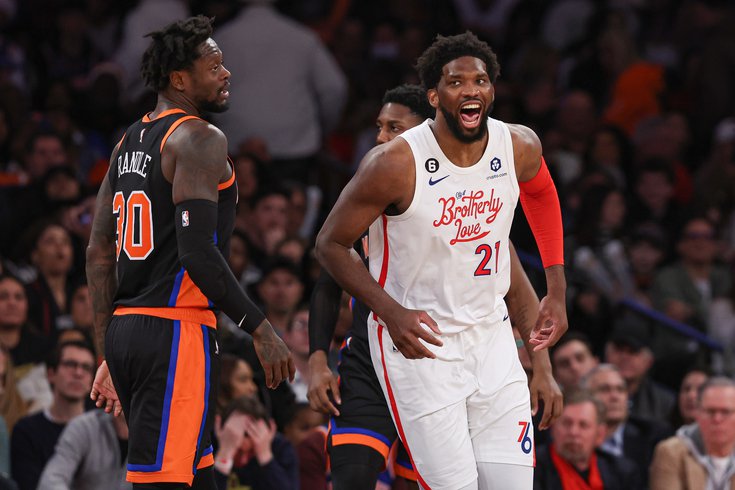 There was no stopping Joel Embiid this past month.

An outright dominant month from Joel Embiid ended in league-wide recognition to kick off 2023.

The Sixers' star center was named the Eastern Conference Player of the Month by the NBA on Tuesday after a December run that saw him finish with averages of 35.4 points, 9.9 rebounds, and 4.2 assists through 13 games.

The Sixers went 9-4 during that span, which included an eight-game winning streak that stretched from December 9 against the Lakers up until Christmas Day at the Knicks. Embiid was a major factor in all of them.

The 28-year old big scored at least 30 points in all but three games throughout the month, which included a 53-point night against Charlotte back on December 11 when he was getting buckets in almost every way imaginable.

As our own Kyle Neubeck wrote of the performance that night, Embiid is playing in a way that breaks the conventions of the modern NBA:

When you see a big man put up a game where he makes 20 out of 32 shots, you expect that you're going to see a montage of dunks and layups. And to Rivers' point, the performance lacked for nothing. The Hornets tried to put up barriers and stop signs, throwing bodies and switches and extra help in the big man's way, and he rendered whatever effort they offered moot.

This is the sort of play we're used to seeing from Tyrese Maxey, the young guard bursting through space even before the pass gets there. To see Embiid take a pass on the wing and hit a slot drive like that is something different, a moment even his teammates have to chew on for a moment.

"He's six-foot-eleven and can move like a guard," James Harden said Sunday. "It's pretty special to see. He gets to the basket and draws so much attention, it's just crazy. It's crazy to be that big and being able to move like that." [PhillyVoice]

And so far, all signs point to Embiid carrying this run well into the new year.

He had a triple-double (16 points, 13 rebounds, 10 assists) in Saturday night's win at Oklahoma City, then 42 points and 11 rebounds during the Monday night victory at home over New Orleans.

The Player of the Month honor is the fifth of Embiid's career, breaking a tie with Hall of Famer and franchise icon Allen Iverson for the most in Sixers history.

Dallas star Luka Dončić, who averaged 35.1 points, 9.3 assists, and 8.5 rebounds during an 11-6 run for the Mavericks, was the Wester Conference winner for Player of the Month.