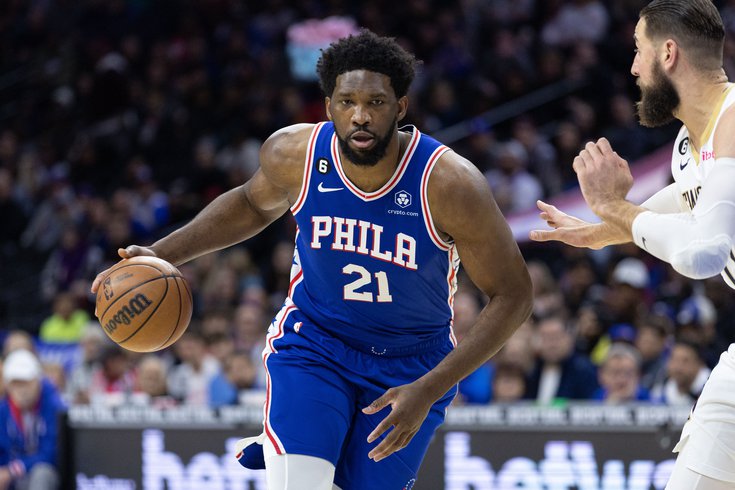 Sixers center Joel Embiid goes to work against the Pelicans.

Questionable to play until around 25 minutes before tip-off, Joel Embiid submitted another offensive masterclass on Monday in a 120-111 Sixers win over the Pelicans. Embiid finished the victory with 42 points, 11 rebounds, and five assists on 15/24 from the field.

• It says a lot about the scoring run Joel Embiid has been on that a 13-point quarter to start the game feels almost pedestrian at this point. His first quarter against the Pelicans didn't feature insane shotmaking or much of anything beyond Embiid being a bear to cover around the basket. You want to reach in and crowd his airspace? Fine, but accept that he's probably going to anticipate where you're going and turn that into a chance at the free-throw line.

That's how you end up scoring 18 points on just seven shots in the first half. After missing his first attempt of the game, he was stuck on automatic, either scoring at the rim, drawing a foul

Perhaps the last missing piece for Embiid on offense is his three-point shot, which has lagged behind the rest of his game all season. I don't think we should expect Embiid to shoot well enough the rest of the way to match his career-best pace as a scorer, but if he can even be an average three-point shooter on decent volume, it adds one more complication for every defense, causing moments of doubt that will allow him to blow-by slower bigs and move untouched toward the hoop. That happened fairly early in the second half, with Jonas Valanciunas biting hard on an Embiid pump fake and giving him a path to the rim. Embiid missed the layup, but still!

I was not as enthused with Embiid in the third quarter. The ball felt like it stuck with him too much, and not because he was hunting particularly great shots. There's a fine line between letting your best player cook and cutting off the supply lines for your teammates, and I thought he trended toward the latter in the early stages of the second half. If the role players aren't staying involved as part of the offense, it's harder to count on their defensive energy and shotmaking as the game wears on.

You write those words and nitpick his effort, and then you think to yourself, "Have we grown spoiled watching this guy?" The Pelicans are a team that demands a lot from Embiid, with a big-bodied center in the starting lineup, Zion Williamson relentlessly attacking the rim, and plenty of young guys who love to get up and down the floor. You look up, and he has 42 points on a night that didn't feel all that special, tying together pieces of just about every great scorer you can think of. Midrange madness, rim dominance, head fakes and pump fakes and the confidence to try anything at anytime.

He is at a level of his sport where peers are scarce, and the only bar he has to think about clearing every night is the one he sets for himself. Despite grimacing and limping and dealing with pain in the final quarter, the dude wound up with a 42-11-5 line and shot better than 60 percent from the field. Absurd, impossible player.

• When James Harden has it going as a scorer, the Sixers become a much more difficult team to try to defend. You put him and Joel Embiid in an action together, and the defense has to pick their poison — do you want to give Harden a runway to the basket, or afford Embiid space in the painted area?

But Harden's first half was less about that partnership and more about Harden turning back the clock a bit, punishing a few switches and putting the Pelicans in jail for swiping at the ball. We got a little bit of everything out of No. 1, from a stepback three (plus the foul) to a destruction of Willy Hernangomez in isolation, Harden's momentum carrying him into the crowd as he deposited a layup through contact.

Whenever Harden is scoring at the rim, or at least getting downhill to give himself chances at the rim, you start to think about where the Sixers can get to by the time the playoffs hit. His three-point touch was off on Monday night, but I care less about that than Harden flashing the ability to break guys down.

Continuing a trend we've seen in recent weeks, Harden was the lead dog for Philadelphia during the Embiid-less stretch at the start of the fourth quarter, and he acquitted himself well there, striking a wonderful balance between scoring and playmaking to help keep the Sixers out in front. Chalk some of his success up to horrid Pelicans decision-making on defense — I'm not sure why you'd ever leave Georges Niang wide open in the corner, for example — but either way, Harden consistently found the openings, swinging the ball around the floor or stepping through space to draw attention.

It wasn't a high-assist night or a particularly dynamic effort, but still plenty to like in this game. And as long as he continues to let catch-and-shoot attempts rip when he gets open looks, he can be an impactful offensive contributor even when he spends a lot of time off-ball.

• Georges Niang has been fighting it from deep lately, so it was nice to see him have a good enough run in the first quarter to hoist a heat check three with about a minute to go in the opening period. When Niang is feeling it, Philadelphia's bench units become a lot harder to stop, because with him lurking on the weakside, it gets harder to send pressure toward the middle of the floor and junk it up for their best guys.

Of course, he's also a prime candidate to put in on-ball actions with Harden, either in double-drag sets or in basic 1-4 ball screens that bait teams into trapping the ballhandler. Harden and Niang absolutely killed teams out of that look during their brief run together last season, and those two have continued their awesome synergy to open this year, giving the Sixers at least one terrific combination for their bench units to take advantage of.

• Tyrese Maxey has been mostly bad in his first two games back, which nobody should overreact to after a long layoff for the young guard. But we also can't ignore that it's happening, and what the repercussions are if he can't pull out of the funk anytime soon.

The thing I was really disappointed to see was Maxey showing a bit of hesitation from beyond the three-point line after getting off to a rough start as a shooter. He has largely moved away from the low-volume, low-confidence days we saw when he first entered the league, but there were gunshy moments in this one, with Maxey stepping out of fairly clean looks and trying to attack the paint before realizing there wasn't a lot of space to move through. It led to a couple of tough runners, shots the Sixers want Maxey to get away from, and ultimately didn't add anything positive to the offense.

One of the reasons I'm not particularly enthused by the idea of Maxey as the sixth man is that he's not offering enough playmaking as the head of the snake. He has a few passes in his wheelhouse, like the pocket pass back to Embiid at the free-throw line, but he has work to do before he can be a team-leading playmaker.

And then there's the defensive end, where he was involved in some nasty defensive breakdowns. He may not have been the main culprit on all of them, but Maxey's defensive outing was worse than his output on the other end. The game is moving pretty fast for him right now, and whether you think he should be the long-term starter or not, Melton is clearly better-suited for the starting/closing role than this underwhelming version of Maxey. But again — just give it time. He didn't become bad at basketball overnight.

• I'm not exactly sure how Montrezl Harrell is getting minutes if he's going to airball layup attempts on pick-and-rolls. Harden threw him a beautiful pass behind the back with Harrell rolling toward the basket in the second quarter, and the ensuing attempt never came close.

Broadly speaking, I've been okay with Rivers going back and forth with his backup center options because they've gotten sauteed with Paul Reed on the floor, but Harrell looks horrific right now. No reason to continue getting buried on the defensive end for an offense-first player who has clearly lost a step on that end.

• Tobias Harris was far too shy from deep in this game. Let it fly, man!

• Doc Rivers during pregame: We're not going to overreact to all-bench lineups having a rough few games.

Doc Rivers during the game: We're bringing James Harden back in to open the second quarter to ensure it isn't an all-bench lineup.

• Zion Williamson failing to score with Georges Niang on him for a good chunk of the first half is the upset of the year. The Sixers did a good job of trying to direct Zion to his right hand as much as possible, leading to some ugly turnovers and stalled possessions for New Orleans. Good job on Philly's end, but even still, I can't believe they got away with that matchup.

(On the subject of Williamson, let it be said that he is just a ridiculous player, and certainly an incredible in-person watch. The Sixers succeeded at getting him to go toward his right hand quite a bit, and Williamson's body control was so good that it often didn't matter. He hit some shots while spinning off of defenders that should have been damn near impossible to make. Not exactly a surprise that he has been one of the most ruthlessly efficient players in the world whenever he's healthy enough to play. Big bummer that he got hurt in the second half.)

• The officiating crew for this game was just comically bad. Zion Williamson getting a friendly whistle is nothing to complain about, especially when we all see the type of calls Embiid gets every night. Everything else was just a disaster, with no rhyme or reason to what they were calling and when.