Does Sixers superstar center Joel Embiid have an MVP case? 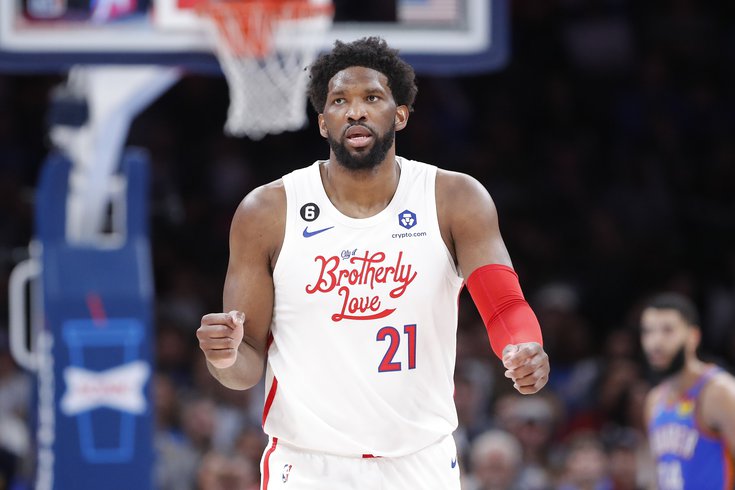 The New Year brings about a new winner for the past week in Philadelphia sports. For the first time in a bit, it's not an Eagle holding down this award following the team's mind-numbing loss to the Saints. I'll go across 11th Street to the Wells Fargo Center and Joel Embiid instead.

After a rocky 12-12 start to the season that had apathy setting in for the Sixers fan base, the team has won nine of their last 11 games and are the fifth seed in an increasingly competitive Eastern Conference. The catalyst for that run, as it always seems to be for this franchise, is Embiid.

Early in the season, Embiid's play was uneven and not up to par for the MVP candidate he's established himself to be over the last couple of years. Perhaps that was due to a slow recovery from offseason injuries and a case of plantar fasciitis. As of late, he's been the superstar who coulda/should/woulda won MVP over Nikola Jokić the last two seasons.

In three games over the last week, Embiid has averaged 33.7 points, 10.3 rebounds, 5.3 assists, 1.7 steals and 2.7 blocks per game. That includes a 16-point triple-double in a New Year's Eve win over the Thunder. Everyone knows Embiid's scoring prowess, so I'm always drawn to his passing numbers. He's steadily gotten better and better as a passer in his career, a far cry from the player who looked incapable of passing out of a post double-team in that 2018 playoff series loss to Boston.

Though Embiid's defense engagement has been up and down at times as he's taken more and more of a role as one of the game's top scorers, the Sixers are currently second in defense rating, behind only Cleveland. That's all Embiid. Averaging more than 33 per game and anchoring a top-two D in the NBA? That smells like an MVP candidate to me.

Sorry to burst Sixers fans' bubbles, but I just can't see the narrative ever falling in Embiid's favor for him to the newly named Michael Jordan Trophy. Second-place finishes to Jokić in 2021 and 2022 will likely end up as being the best he can do. People are still freaking out about him only playing roughly 80 percent of the Sixers' games. The Sixers won't win enough games to finish as the best team in the East like they did in 2021 when a combination of individual performance and team success that should've catapulted Embiid to the MVP award. He's currently sixth in NBA.com's MVP Ladder. The league is just so, so talented right now.

Philadelphians would much rather win a championship than see Embiid hoist that shiny personal accolade I'm sure. I have severe doubts they're in a position to make a run to the Finals with this team as currently constructed, so my suggestion would simply be to enjoy the ride of one of the most talented big men the sport has ever seen playing basketball for this city.