Next man up? Sidewinding lefty fashions dominant outing for 'Pigs 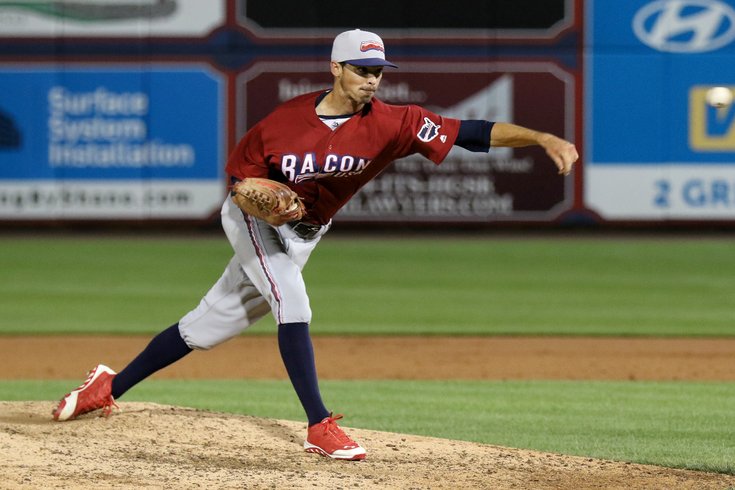 Hoby Milner hasn't allowed a run in 17 of his 19 appearances at Triple-A Lehigh Valley and struck out five of the seven batters he faced to earn to win in his most recent outing on Wednesday night.

ALLENTOWN – You’re never going to blow a ball by a hitter when the first number on the radar gun starts with an ‘8,’ but you can sure give off that impression when your secondary stuff is coming in 10-12 miles-per-hour slower and your arm angle makes it difficult for hitters to get a good look in the first place.

This, in short, is was sidewinding left-hander Hoby Milner has been able to do in the first two months of the 2017 season at Triple-A Lehigh Valley. A former seventh-round pick (2012) who returned in March to the Phillies by the Cleveland Indians as a recent Rule 5 pick, Milner may not have stuck with the Tribe and began 2017 in one of baseball’s best bullpens, and in the big leagues, period, but he has managed to do the next best thing: dominate at Triple-A and put himself on the radar to join the Phillies in the not-so-distant future.

After striking out five of the seven batters he faced on Wednesday night – and picking off a runner at first, too, for good measure – Milner saw a fellow IronPigs reliever summoned into manager Dusty Wathan’s office to be told he was headed to the big leagues. Right-hander Casey Fien joined the Phillies in Atlanta on Thursday.

Having pitched 2 1/3 innings on Wednesday night, Milner would have been an unlikely choice anyway, since pitchers are almost never summoned to the major leagues when they don’t have a completely fresh arm. Still, Milner’s eye-popping numbers (1.88 ERA, 1.04 WHIP, 5.75 K/BB rate) make him an ideal candidate to get a big league audition soon.

“I’ve gotten to the point in my career where you can’t really think about it,” Milner said of the anxiety any Triple-A player can face, waiting for the manager to call you into his office postgame for the news you’ve waited your whole life to hear.

On Wednesday night, while red-hot Nick Williams and bash brothers Rhys Hoskins and Dylan Cozens supplied the offense with home runs, Milner was summoned from the ‘pen with two on and two out in a tie game. Milner threw just one pitch before firing a strike to Hoskins at first base to pick off Dwight Smith Jr.

“He picked off a guy his last outing the same way, not even close with the guy not even going back to first base,” Lehigh Valley manager Dusty Wathan said. “He’s doing a lot of really good things right now.”

Those other things: he retired the side in order in the sixth, beginning the frame by striking out Toronto power prospect Rowdy Tellez and long-time big leaguer Jarrod Saltalamacchia. And in the game’s seventh and final inning, Milner topped that by rebounding from a leadoff single by striking out three straight hitters, and not just any three hitters but three guys with a combined 17 home runs and .373 OBP (two of them were right-handed hitters, too).

Not bad for a guy with a fastball topping out at 89-MPH, complemented by a slider (the slower of two variations humming in the low 70s) and a changeup.

“He’s been getting a lot of swings and misses,” Wathan said of Milner. “He had a good plan and stuck to it. When he came back to the dugout and Tellez was still up, I heard him talking to (catcher) Logan (Moore) and how he was going to handle him, and he stuck to his plan, breaking ball early and finish with fastballs, and he did it, man. He threw the ball well.”

Three years ago, Milner was just another left-hander in the Phillies farm system with middling numbers in the Double-A Reading rotation. He wasn’t striking out enough batters and he was walking too many.

A year later, following the 2015 season, Milner, now a reliever, tried something drastic while pitching in the Puerto Rican Winter League.

“I pitched for three months submarine, way down here,” Milner said, pointing to the floor in the IronPigs’ clubhouse. “I had good numbers, my command was OK, but I didn’t have many strikeouts and I wanted strikeouts, so I raised my arm up and got a little more (velocity), and a sharper breaking ball. And it’s turned out – the (arm slot) I picked is the one I still have. It’s worked naturally.

“I’d recommend anyone that’s dropping their arm down to find something that feels natural and fluid. …it’s come naturally for me, I have one solid, athletic movement to home plate. It’s translated into me locating a lot better than I used to.”

Milner, now 26, had a breakout year between Reading and Lehigh Valley last year, striking out 76 while walking 15 in 65 innings. He wasn’t added to the 40-man roster, however, opening up the possibility to get selected in the Rule 5 draft in December.

Milner was selected, but then returned late in spring training, finding himself back in the same place he excelled a year ago. And with the same success he had in 2016, Milner is once again one postgame conversation with his manager away from being summoned to the Phillies’ bullpen.

“Coming back here (from the Indians) meant I wasn’t going to be in the big leagues, but aside from that I knew I’d have opportunities here if I pitched well,” he said. “I’ve pitched well. The rest will take care of itself.”