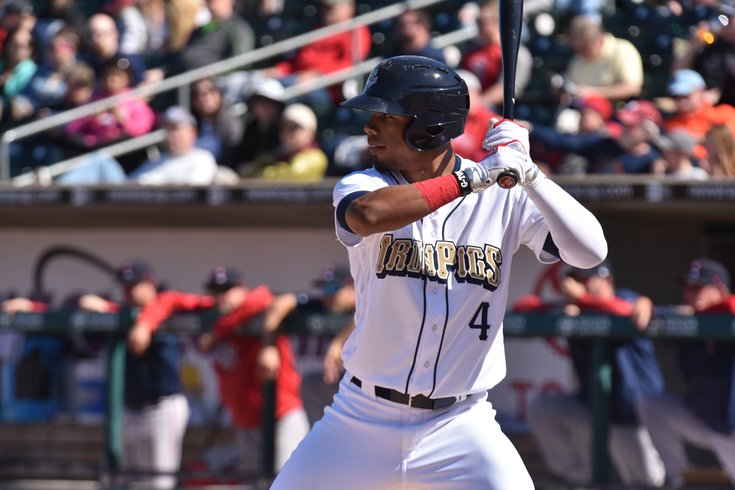 ALLENTOWN – The exclamation point on the IronPigs’ 26th win in their last 32 games (and second in a single-admission doubleheader on Wednesday night) was a howitzer of a home run, a ball that, according to the advanced metrics made immediately available at Coca-Cola Park, had an exit velocity of 112 miles-per-hour and traveled 410 feet.

Nick Williams’ 12th home run of the season – and his 10th in his last 21 games – would have been traveled a good bit farther, too, if it wasn’t for that flag signage that caught the ball as it attempted to exit the ballpark.

It’s swings like the one Williams made in the final of his six at-bats on Wednesday night that tantalize, that remind you of the talent within the mercurial, 23-year-old outfield prospect.

Williams showed it almost immediately after arriving to the Phillies organization two summers ago in the Cole Hamels’ trade, when he homered twice in his second game with his new team, and four times in his first 19 games. The bat speed, as his swing Wednesday night displayed, is vicious.

The yin to the yang of Williams’ power potential and bat speed, however, is his nearly non-existent ability to draw the occasional walk. Williams has 30 walks in 846 plate appearances in 204 games in the Phillies organization and a grand total of 115 in 2,375 minor league plate appearances in six seasons.

But, he also has a .331 OBP and .809 OPS in that same minor league career, so perhaps the plate discipline criticism is a bit of nitpicking. Few professional hitters are perfect and it’s not as if he’s been unproductive when you take stock of the full picture.

“I believe I can walk,” Williams said Wednesday night. “When we were in Louisville (last week) I kept getting ahead 2-0 (in the count) and I was like, ‘OK.' One time I ended up walking, but, if they’re going to do that, I’m going to hit.”

It’s also fair to point out that just glancing at box scores every day doesn’t give anyone the full appreciation for the scope of the hitter.

“Sometimes it only takes one pitch to get yourself into a good count,” Wathan said. “He’s taking pitches early in the count – some are hittable pitches where he would have swung in the past, where he gets a strike – but I think he’s getting to the point now where he’s recognizing pitches better and not chasing balls out of the zone, especially when he gets behind in the count. I don’t see him striking out on balls way out of the strike zone, non-competitive pitches.

“Like (Monday) night, his first two at-bats he struck out, but they were good at-bats. They were quality at-bats because he foul-tipped the ball into a guy's glove, didn’t swing at balls out of the zone. Saw some pitches. It was good. Talking to a lot of people who saw him apply all last year, a night like last night probably would have been a disaster – 0-for-4 with four punch outs. Going out there flailing. Instead, he went up and kept himself under control, got a hit in his third at-bat, then got another, and next thing you know he’s 3-for-5 on the night. So I think that’s the mental mature side I see.”

Following a trying first full season in the Phillies system, when he slashed .258/.287/.427 with 13 home runs in 125 games at Lehigh Valley and was benched a couple of times for lack of hustle, Williams’ maturation has led to production that’s put him near the top of the International League leaderboard.

We’re only in the first week of June and Williams is one home run away from tying last year’s total. Only five players in the league have hit more (two are his teammates, Rhys Hoskins and Dylan Cozens, who are tied for the league lead with 14 apiece).

Only three players in the IL have more total bases than Williams’ 106. His .520 slugging percentage ranks fourth best (and second on the IronPigs to IL-leader Hoskins, .619).

These are all very good and very encouraging things for the folks in the Phillies organization eager to see the young prospect respond to a trying season and re-emerge as a top prospect ready to put himself on the big league radar.

So, what’s changed, beyond a bit better selectively at the plate? Williams tuned out the Phillies – literally.

“Last year I was trying to make the big leagues every day,” Williams said. “Now (I know) it’s not my decision, I don’t pay attention. I don’t know who’s doing what up there, I don’t even know who’s playing. I turned my MLB app off for Phillies notifications, all of that. So I just said, you know, I’ll go day by day, pitch by pitch, make adjustments and, you know, it’s never over. After those first two (at-bats) on Monday, I knew I had three more. And I made it count.”

Without being asked, Williams’ brought up the same day and game his manager mentioned hours before Wednesday’s game. So, is it fair to say that wouldn’t have gone the same way last year had you began a game 0-for-2 with two strikeouts, responding with three hits (including a triple) and two RBI in your next three at-bats?

“No, absolutely not,” Williams said. “I’d be maybe trying to bunt or tap the ball (to get on base). That’s part of growing and maturing. I think it was in the offseason when I was just taking a break, relaxing, breathing, and just thinking of the whole year, after two years and the stuff I did, not running some balls out and stuff like that. I said I’m just going to play the game hard, all nine innings. And it carried over. I said I’m not every going to take a play off again. The same with ABs, I’m not trying to give away ABs, just trying to grind.” 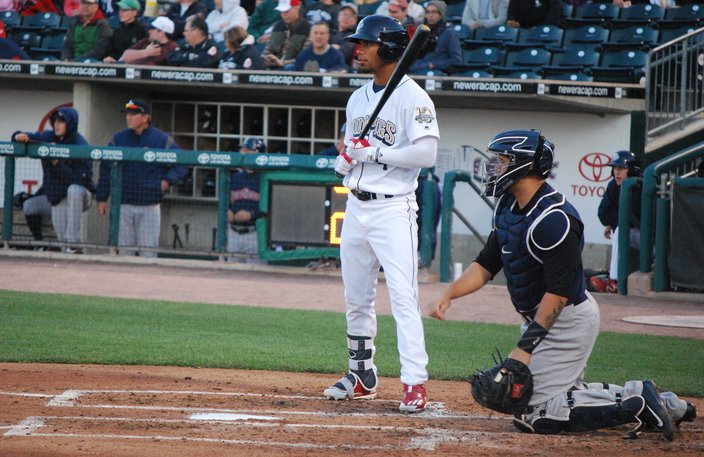 Nick Williams is one home run away from tying his output in 2016 and ranks in the top five in the International League in total bases and slugging percentage, too.

There’s something to be said about self-awareness. Williams is in a better state of mind in 2017 and the results are showing on the field.

The home run binge may not keep up, but that might be OK, too, in order to see how he responds when the ball isn’t flying out of the park as it has been in the last three weeks.

And even if he’s not paying attention to the Phillies, Williams has put himself into a position where he could very well be the next man up when the big league team has a void in its outfield (perhaps if and when Howie Kendrick is dealt prior to the July 31 non-waiver trade deadline).

“I’m just relaxing,” Williams said when asked to explain hitting 10 home runs in 21 games after hitting a baker’s dozen in all of 2016. “I’m not trying to hit home runs. I’m trying to square the ball up. There have been times where I’m just trying to hit the shortstop and the ball just keeps going and going and I’m like, 'Alright, I’ll take it.' I’m just trusting my hands and reacting. I just realized I have more time than I used to think I had.”