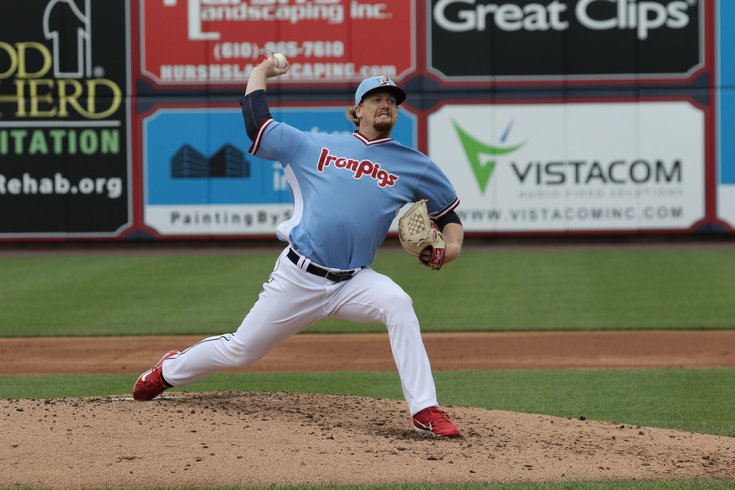 Tom Eshelman has an International League-best 1.68 ERA and 0.86 WHIP in eight starts since joining the IronPigs last month.

Last June, three days after his 22nd birthday, Eshelman jumped onto the talented, prospect-laden roster at Double-A Reading to take the next progression as a minor leaguer. The first game went just fine (five innings, one run) but shortly thereafter he went into a tailspin.

Those two months weren’t fun, but they gave him motivation leading into the offseason ... and set him up for success in his first two months of 2017.

“I kind of just went home and had a self-evaluation of what I needed to do in order to succeed and then went to work,” Eshelman said before Wednesday’s game at Triple-A Lehigh Valley, where he has reestablished himself as a rising, reliable right-hander in the Phillies’ system.

In his three-year career at Cal State Fullerton, Eshelman struck out 321 batters and walked only 18 in 376 innings.

“It was kind of a mixture of everything,” he said. “The one thing I needed to do was to create depth with each of my pitches, try to go down rather than side to side, to stay out of the bat path. That’s the one thing I tried to really hone in on and it worked. I’m capitalizing on that a little bit and learning when to throw each pitch in each situation and continuing to learn.”

This winter, Eshelman fiddled with mechanics and played around with grips. This spring, he’s been near-dominant.

After following up a shutout in Indianapolis with seven more sharp innings against Buffalo on Monday, Eshelman is 7-0 with a 2.05 ERA in 11 starts between Double-A Reading and Triple-A Lehigh Valley. Less than a month after his promotion to the IronPigs, Eshelman was flanked by a couple of pig mascots on the middle of the mound before Wednesday night's game in Allentown to receive an award as the International League’s pitcher of the month.

When asked to recall the last time he felt as good as he has in the last month – Eshelman has pitched into the seventh inning in seven straight starts, and allowed more than two runs in just one of those starts – he had to rack his brain back to his collegiate days at Cal State Fullerton.

“Honestly, my junior year of college,” said Eshelman, a second-round pick by Houston in the 2015 draft. “I had five to six starts where everything fell into place. I’m just pitching with a lot of confidence right now.”

Fittingly, Eshelman can also trace the pitching philosophy that has taken him to the cusp of becoming a big leaguer to his college days, too.

Coming out of Carlsbad (Calif.) High School, the same school that produced former big leaguers Troy Glaus, Brady Anderson, and 2008 Phillies world champ Greg Dobbs, Eshelman wasn’t considered a pro prospect and said he wasn’t a big recruit, either. To earn a spot on the Cal State Fullerton roster, Eshelman received a mandate from the coaching stand upon arrival: “We want you to throw strikes, we want you to compete with the hitter and get early outs.”

“That’s ultimately how I got the starting role on Fridays there … how I snuck into that role and I kind of just ran with it,” Eshelman said.

He ran with it by doing just what the coaching staff said. In his three-year career at Cal State Fullerton, Eshelman struck out 321 batters and walked only 18 in 376 innings.

“It was one of those things, when you do walk somebody, they’re like, ‘What’s wrong with him?’” Eshelman said with a laugh.

Eshelman’s minor league strikeout-to-walk numbers aren’t quite as stingy (180 strikeouts, 42 walks in 205 2/3 innings) but they’ve been more than adequate in his 11 starts in two different stops this year: 53 strikeouts, nine walks in 74 2/3 innings.

“Last year he probably uncharacteristically had more walks and maybe more balls thrown,” said Lehigh Valley manager Dusty Wathan, who also was at Double-A Reading last season. “But, to me, he was still throwing to the college strike zone, and as you go up, the strike zone gets more legitimate. He was still throwing the ball right where he wanted it, it was just being called a ball all the time. It was just something he had to work on.”

“I was just watching regionals this weekend – strikeout zone is definitely different (in college), it’s much bigger there,” Eshelman said. “But it’s just being able to adapt, that’s the biggest thing.”

Despite a quick climb to Triple-A, Eshelman has managed to adapt. With a fastball hovering in the low 90s (to go alongside a sinker, slider, curveball, and changeup), he’s throwing strikes again with his pinpoint control and putting himself firmly on the Phillies radar.