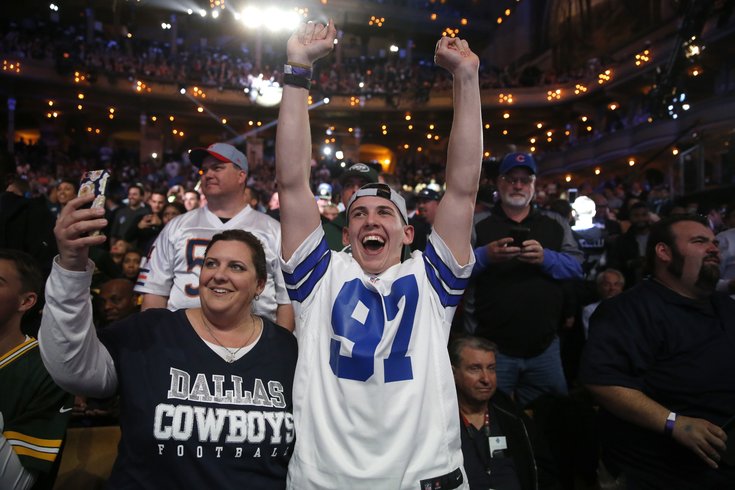 There's a thinking that you have to wait three years to properly evaluate a draft pick, but does that mean we can't have opinions on how well each team did the next day? Hell no. With that in mind, here are my NFC East draft grades.

There's isn't much to dislike about Wentz's game. He's big and sturdy, he has a great arm, a quick release, he's surprisingly athletic and very smart. Even if you dock him for playing at a lower level in college, Wentz operated in an offense that had pro-style concepts, prompting some to believe he's more pro-ready than other quarterbacks who played in more remedial offenses at a more competitive college level.

In the NFL, you either have a quarterback, or you don't, and if you don't, you have no chance unless you have some kind of historic defense, which the Eagles do not. The Eagles now believe they have their guy, and they were right to be aggressive in their pursuit of Wentz.

Awful. I've long been on record that Elliott would not have been good value at pick No. 8 before the Eagles traded up to pick No. 2. At pick No. 4, where Dallas landed Elliott, that is atrocious value.

To begin, let's be very clear -- Elliott is really, really good, as is any player who is being drafted in the top 10. This is in no way a slight against Elliott, rather, it's a about the value of drafting the position he plays at the fourth overall pick.

Running backs take a pounding in the NFL. Their bodies wear down, and even the good ones rarely make it beyond the age of 30. Below is a chart of the projected starting running backs for all 32 teams, as their rosters currently stand:

As you can see, only five of the NFL's projected starters at running back are 30 years of age or older. Two of those backs -- Justin Forsett and Rashad Jennings -- have less than 750 career carries. Had they carried the load for the entirety of their careers, they'd probably already be out of the league.

The average age of the running backs above is 25.5 years old, and that's before the draft, when some rookies (like Elliott himself) will replace aging vets atop the depth chart. By comparison, the average starting age of NFL quarterbacks heading into the 2016 season is 29.4, and that's with an almost 40-year old Peyton Manning having already retired.

In short, if you're a Super Bowl contender looking for an immediate impact player for the short term, then sure, go draft yourself a running back talent in the middle-to-end of the first round. If you're delusional about your team's prospects of competing for a Super Bowl (cough, Cowboys, cough), it becomes harder to justify taking a running back at fourth overall.

Furthermore, there is an absurd number of really good sophomore running backs who will be eligible to enter the NFL Draft in 2017. A quick list:

And then there's Wisconsin's Corey Clement, Pitt's James Conner, and Baylor's Shock Linwood, who will all be highly regarded seniors in 2016.

Even if you believe that Elliott is better than every single one of the players listed above (I don't, for the record), wouldn't it be much better value to get a marginally less talented back in the second round in 2017 than Elliott at fourth overall?

The Cowboys are going to regret passing on stud defensive back Jalen Ramsey.

But wait, we're not done.

The Cowboys reportedly "loved" Carson Wentz, but lost out when the Rams and Eagles traded up to wipe the top two quarterbacks off the board.

Would've been curious to see teams scrambling if Carson Wentz was there at 2 prior to Eagles trade. Saints love him, Cowboys do, too. Alas.

And then, with Wentz and Jared Goff gone, the Cowboys tried to trade up from the second round back into the first for Paxton Lynch, but missed the boat.

The bid for a QB fell short as the Cowboys narrowly missed a trade for Paxton Lynch. https://t.co/rjWcs2TKZ1 pic.twitter.com/1KttwFTkP5

Elliott may indeed wind up being a good running back, but the execution and logic of this draft by the Cowboys was a failure.

The Giants draft corners and pass rushers in bulk. While they are already paying a lot of money to Janoris Jenkins and Dominique Rodgers-Cromartie, don't forget that they selected Prince Amukamara when they already had Corey Webster and Aaron Ross, who were viable starters at the time. This is just what they do. In that regard, Apple makes sense as a draft target, although it feels a lot like a positional reach at pick No. 10.

The Chicago Bears jumped ahead of the Giants to draft Georgia edge rusher Leonard Floyd. It would interesting to know if the Giants preferred Floyd to Apple. It will also be interesting to see what kind of career CB Vernon Hargreaves has, who was drafted by the Buccaneers at pick No. 11.

Doctson is nice receiver prospect, but he's not a guy opposing defenses are going to be terrified of on Sundays. Unfortunately for Washington, this was a draft where there was a dropoff in talent once you got into the teens, and it wasn't a particularly good wide receiver draft.

In 2016, four receivers were taken in the first 23 picks -- Corey Coleman, Will Fuller, Doctson, and LaQuon Treadwell.

Cooks went 20th overall, while Doctson went 21st. Doctson is nowhere close to as good a prospect as Cooks was when he came out.

Still, when I look at the players taken after Doctson, I can't really find fault with the pick. It was just the wrong year to be drafting 21st overall.