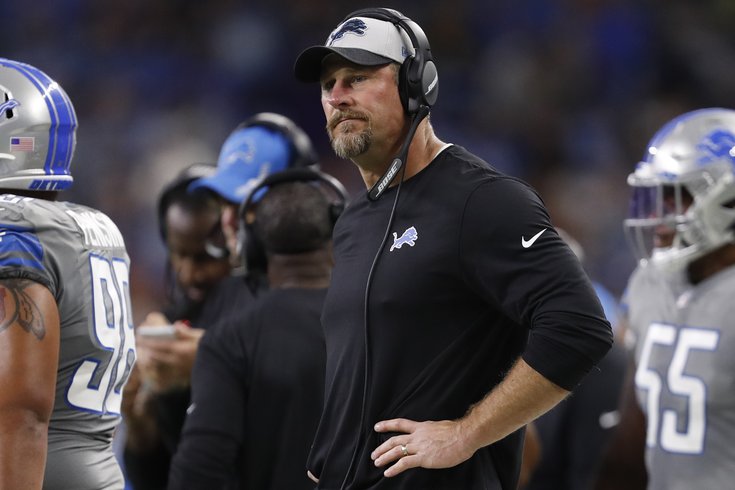 The Lions will be like 2-8 when they play on Thanksgiving this year, as usual.

Week 5 of the NFL season is in the books, and we have our first obituary of the season. That would be the winless Detroit Lions, who are no strangers to being irrelevant for the bulk of the season.

If you were to pick the worst matchup from the NFL's slate of games in Week 4, just in terms of bad/boring team vs. bad/boring team, what would it be? My pick would have been Lions-Bears. Well, guess what! Lions-Bears is this year's early Thanksgiving Day game.

I've come to terms with the Cowboys playing on Thanksgiving every year, because at least they have a lot of fans, and it's fun to watch them getting wrecked in front of a national audience, complete with obligatory shots of angry Jerry Jones in the luxury box.

But why are the Lions still playing on Thanksgiving?

Detroit hasn't won a playoff game since 1991, and they are very likely going to lose double-digit games for the fourth straight season. The following is a list of the dates that we have killed the Lions off in this NFC Hierarchy/Obituary series, since 2018:

In other words, this will be the fourth straight year they'll be essentially dead and buried before being showcased on a national holiday. The window from noon to 3:30 p.m. on Thanksgiving has basically become the "Let's visit your side of the family" window for football fans nationwide.

I'm excited to not have to write about them in this series anymore for the rest of the year. 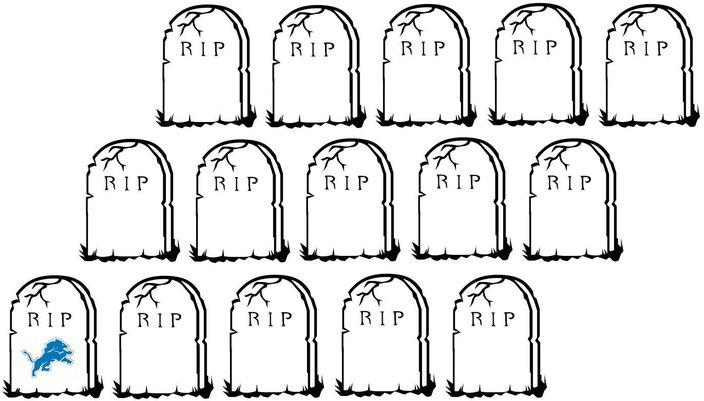 15) Giants (1-3): In their win over the Saints, the Giants got contributions from a bunch of their recent first-round picks:

The Giants should give Dave Gettleman a contract extension immediately.

14) Falcons (1-3): The Falcons' defense is unsurprisingly giving up the most points in the NFL.

Taylor Heinicke said McKissic was his 5th read on this insane play.pic.twitter.com/rddWwBQ6QX

13) Eagles (1-3): In their last two games, excluding kneeldowns, the Eagles have allowed 11 touchdowns in 18 defensive possessions. It probably should have been 12 touchdowns, if not for a fortuitous "progress stopped" whistle that caused a turnover on downs at the goal line against Dallas. But whatever, 11 TDs is still really bad.

The pass rush isn't getting home, the linebackers are getting owned in the run game, and the secondary is getting eaten alive underneath in the short-to-intermediate area of the field in the passing game.

The Cowboys' and Chiefs' offenses are great and all, but it shouldn't look as easy as it has for them the last two weeks.

Sounds fun to be a Bears fan.

10) Vikings (1-3): It's easy to get distracted by the Vikings' talented skill position players and forget that their offensive line still sucks.

9) Saints (2-2): With a lead, playing a bottom five team, and Jameis Winston playing well, Sean Payton was like, "This bores me. Let's call a shot play with Taysom Hill."

8) Panthers (3-1): The Panthers had the No. 1 ranked defense in DVOA after the first three weeks, a span during which they faced Zach Wilson, Jameis Winston, and Davis Mills.

And then they played a real offense.

49ers’ HC Kyle Shanahan said there’s a chance that QB Jimmy Garoppolo could play Sunday; he is not ready to rule him out due to his calf injury.

6) Seahawks (2-2): Sidney Jones started for the Seahawks on Sunday. According to pro-football-reference.com, he gave up 8 catches on 10 targets for 121 yards and a TD.

The #49ers first drive results in a Ross Dwelley TD!

Trey Lance to Deebo Samuel for a 76-yard touchdown! pic.twitter.com/Xx7AcnWikM

5) Cowboys (3-1): The Cowboys' offense is explosive with those three wide receivers and Dak Prescott having his best season so far, but we already know that. However, I think what's concerning about the Dallas offense if you're an Eagles fan is that the duo of Tony Pollard and Zeke Elliott combined with that offensive line really gives them a complete offense.

With an eight point lead and over four minutes to go, the Cowboys were able to kill off the rest of the clock on Sunday against Carolina:

4) Packers (3-1): Here's a picture of an inflatable cow at the Packers game on Sunday.

For the inflatable cow fans, a still from last night. #GoPackGo pic.twitter.com/dts7B9pIqM

3) Buccaneers (3-1): I think you all had enough Tom Brady shoved down your throats last week. Let's take a break from Brady and Bucs for a week, shall we? Cool.

Ehhh, maybe not. We should at least show this:

“I sure as hell can’t catch anything. Everyone has seen that drop against the Eagles in the Super Bowl”

2) Rams (3-1): It should be a fun Thursday night game this week between the Rams and Seahawks. After a 3-0 start including an impressive win over the Bucs, the Rams were looking like the favorite in the NFC, and then they got handled by the Cardinals.

Thursday night will be a huge game for them. It'd be, uh, less than ideal to drop to 0-2 in the extremely competitive NFC West.

1) Cardinals (4-0): Who had the Cardinals as the last undefeated team in the NFL this season?

It doesn't seem to be flukey, either. The Cards have won three road games, including a legitimately impressive showing against the Rams in L.A. Week 4.

The Cardinals have always had plenty of talent, but now they're also playing with some consistency.