John McMullen: Can Nick Sirianni fix the Eagles' penalty problem before it's too late? 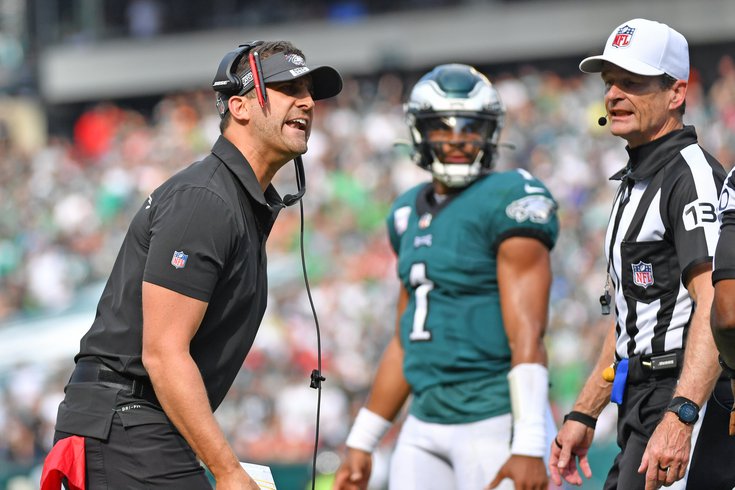 Philadelphia Eagles head coach Nick Sirianni argues with the referees over a penalty that costs the Eagles a touchdown during the third quarter against the Kansas City Chiefs.

The NFL has gone a bit haywire when it comes to penalties coming off a somewhat out-of-character COVID-19 season in which the yellow laundry was kept to a minimum, resulting in a more enjoyable experience for the consumer.

The NFLPA even used that pleasant surprise to try to scale back offseason work even further, arguing that no offseason in 2020 resulted in a product that didn’t diminish at all, either not realizing the added aesthetic of fewer stops didn’t equate to things like preparation and execution or more cynically simply using the landscape for its own selfish goals.

If the players want to further that argument moving forward they can again ignore the whims of Park Avenue by pointing to the fact that the games have reverted and gotten uglier as over-legislation is back from its one-year vacation with the flags flying at a breakneck pace.

Nowhere has that been easier to identify than in Philadelphia, where the Eagles are on pace for 187 penalties this season, a number that that would lap the old record of the 2011 then-Oakland Raiders (163) by 13%.

And that’s after a game in which things were a little more manageable — nine penalties for 49 yards — during a 42-30 shootout loss to the Kansas City Chiefs.

So many of the Eagles' penalties have been costly as well, like J.J. Arcega-Whiteside taking subtlety out of his game on a rub route that should have resulted in a Zach Ertz touchdown or Andre Dillard drifting downfield with the timing off due to Jalen Hurts not getting the football out on time, a miscue that took a Dallas Goedert score away.

Then there’s the more common stuff like pre-snap sloppiness turning favorable down-and-distances into negative ones.

"You’re furious that you go to 1-3, but we can also see that there are some things that are there to build on," Sirianni explained before pivoting. "The self-inflicted wounds have to stop. I know I sound the same, but it’s still true.

"We have to stop the self-inflicted wounds, putting ourselves in holes and with penalties."

According to Sirianni, the penalties could even affect the way he has to call the game, pointing to the glut of illegal man downfield penalties that have spiked around the league but have especially been a problem for the Eagles due to their heavy-RPO nature.

The Eagles got called twice for that against the Chiefs and it’s a timing issue, according to the coach. The linemen are supposed to head downfield to block and when the ball comes out late, they are caught with the hand in the cookie jar.

Furthermore, that’s been a point of emphasis around the league to clean up illegal blocks, the rare win for the defense in this league.

"Well, they're calling it. The referees, they're calling that pretty hard this year," Sirianni told PhillyVoice after the game when asked about the issue. "Probably a little bit harder than they have in the past. So, we have to adjust.

"That starts with me. We have to adjust how we're blocking it, how we're teaching the blocking schemes to not allow the guy and how we're reading it, or just don't call it. That's what we're going to have to do because you obviously can't shoot yourselves in the foot."

The penalties were more noticeable for the offense against Kansas City because it took points off the board. The third being a DeVonta Smith 34-yard touchdown erased with a poor route not giving the rookie enough room as he got jockeyed with downfield — not unlike the penalty Jalen Reagor was called for back in Week 2 against the 49ers.

On defense, it’s about giving offenses extra opportunities, something you obviously can’t do against Patrick Mahomes and Co.

"It is costing us, and it’s extending the drives," veteran cornerback Darius Slay said. "We need to get off the field. It’s tough. It’s self-discipline. That’s what we have to do well. We have to keep working on it and keep being accountable for it in practice."

"Each player and each coach has to figure out how to come together and be on the same page," Harris said. "We have to continuously find a way to execute and be able to get wins. What that looks like in terms of the scheme, holding the team to limiting their rushing yards, giving up explosive plays, creating turnovers, and things like that."

One positive is that Sirianni isn’t playing the woe-is-me card, even if he and center Jason Kelce were incensed with the JJAW call.

"I'm not saying one way or the other if they got that right. I'll keep my opinion to myself. But they have a tough job just like all of us."

The Dillard call was even more clear cut, and this time the finger wasn’t pointed toward the zebras.

"That's my fault," Sirianni admitted. "I have to get better at that with that. It's not Andre’s fault he was downfield on that one because the timing was pretty good. The referees I thought did a good job of refereeing it."

Smith, meanwhile, was simply about spacing on the field.

“He's got to work a better release at the line of scrimmage. DeVonta will be the first one to tell you that, to save the quarterback room, there was some hand fighting, some pushing,” Sirianni said.

Avoiding yellow at all costs is the easier way to make those aforementioned tough jobs a little easier.