Week 5 NFL odds: Point spread and total for every game, including Eagles vs. Panthers 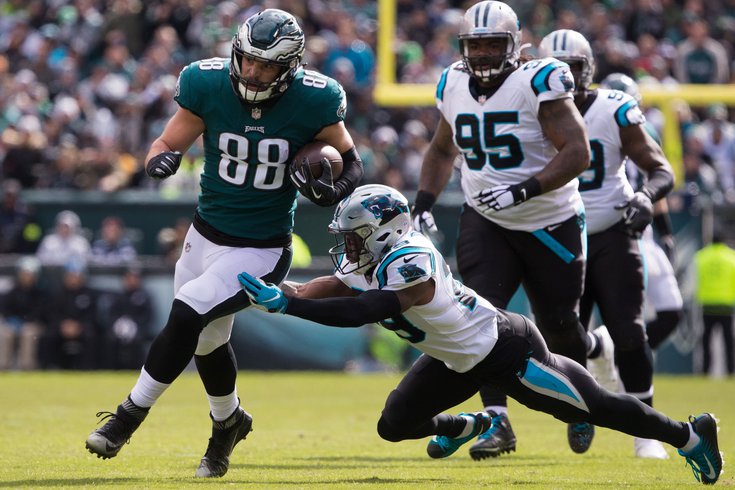 We're a quarter of the way through the NFL season — or at least we would be if they still played 16 games. But with the extra game this season, we haven't quite hit the quarter pole just yet.

Still, as there are every week, there are likely going to be some upsets and some places you can find value if you're looking to lay down a wager for the week's slate of games. With that in mind, and as we do every Monday, let's take an early look at all the Week 5 NFL odds for every game...

This NFC West is one of just two divisions that still have all four teams at .500 or better, but that is going to change on Sunday with all four division rivals set to face off for the second straight week. In Week 4, it was the Cardinals upsetting the Rams to stay undefeated while the Seahawks handle the 49ers after San Francisco lost starting QB Jimmy Garoppolo to injury. This should be another good game (and might be one of the best Thursday night matchups all season) with the Matthew Stafford and the 3-1 Rams heading to Seattle looking to stay above the 2-2 Seahawks in the division standings.

The Eagles are coming off three straight losses as they head into a matchup with the surprising 3-1 Panthers, a game sandwiched between last years two Super Bowl teams, the Chiefs and the Bucs, who will travel to Philly for next week's Thursday night game. Carolina could again be without Christian McCaffrey, which may be part of the reason this line is so close despite the disparity in the two team's records. The Eagles really need a win on Sunday, otherwise they could be looking at a losing streak that extends to five or six games. Beating a 3-1 team on the road sounds tough, but when you look at the teams the Panthers have actually beat (NYJ, NO, HOU) — combined with them possibly missing their best player — and the proposition of an upset doesn't sound too crazy.

Both of these 1-3 teams went down to the wire on Sunday, but it was only the Jets who were able to escape with a victory thanks to their overtime win over the Titans. Atlanta, on the other hand, was stunned at home by Washington, who scored two TDs on passes from Taylor Heinicke in the final four minutes of the game. It was a very Falcons way to lose. Now, Matt Ryan and Co. will look to bounce back against a Jets team that is very much still experiencing some growing pains with rookie QB Zach Wilson, who had his best game so far in the Jets' win.

The Bengals are one of the early surprises of the football season, and Joe Burrow did his best Aaron Rodgers impression in last Thursday's comeback win over the Jaguars. This week, he'll go up against the real thing as his Cincy team plays home underdogs against the 3-1 Packers, who have won three straight after that blowout loss to the Saints in their opener.

The Texans stink. The Patriots at least looked good on Thursday night slowing down Tom Brady and the Bucs (with some help from the terrible New England weather), even if it came in a losing effort. You may not be sold on Mac Jones, but allow me to counter with... Texans starting quarterback Davis Mills. He was 11-21 (52.4%) for 87 yards and four (yes, four) interceptions. McCorkle's not sounding so bad anymore, is he?

Unlike the aforementioned NFC West (and AFC West, for that matter), where every team is .500 or better, every team in the AFC South is .500 or worse, with the 2-2 Titans leading the way and the 0-4 Jaguars sitting along in the basement. Both of these teams suffered bad losses in Week 5 and will look to bounce back on Sunday afternoon. After the weekend Urban Meyer had following his team's TNF loss to the Bengals — one that he's already had to answer questions about and is surely an unwanted distraction — it's hard to see Jacksonville picking up the upset win on Sunday.

These two NFC North rivals have a combined one win between them, but when you look at the quality of opponents and the margin of defeat in those games, it's clear who the better team is. With one-score losses to the Bengals (on the road in OT), the Cardinals (the NFC's only undefeated team) and the Browns (again, on the road), the Vikings could just as easily be 3-1. In fact, despite being in third place in their division, they're the only team with a positive point differential (+2). The Lions, meanwhile, are -38 through four games.

Much will depend on Teddy Bridgewater's status in this one. He was knocked out of the Broncos' Week 4 loss to the Ravens with a concussion. If he can go, expect the line on this one to move, as the Steelers have struggled to a 1-3 start while the Broncos are hanging tough in one of the best divisions in football. That being said, much like the Panthers, the Broncos haven't really beat anyone, and in their first game against a legit team, they lost (albeit with Drew Lock and not Bridgewater under center).

The Bucs only managed 19 points in their win over the Patriots on Sunday night. Look for them to take out their frustration on the 1-3 Dolphins, who like the Eagles have dropped three straight after going on the road and winning in Week 1. A Bucs win here is good news for Birds fans, as Philly owns Miami's first-round pick in 2022.

Both of these teams moved to 2-2 on Sunday and did so in very different fashions. For the Saints, it was a collapse against the Giants that led to their second loss of the season (and the Giants' first win). For Washington, it was that previously mentioned comeback win against the Falcons. Does Heinicke have any more magic against Jameis Winston and Co.? Or will the Saints get back on the right side of .500? We all know who Eagles fans will be rooting for.

This is a tough stretch for the Chargers, who beat the Chiefs in Week 3 before taking on the 3-0 Raiders on Monday Night Football in Week 4. Then, next week, they'll host the 3-1 Browns on a short week before traveling across the country to take on the Ravens, who are also 3-1. The Browns, meanwhile, have a tough stretch of their own coming off Sunday's 14-7 win over the Vikings. After the Chargers, who could be 3-1 themselves if they can knock off Vegas, they'll face the 4-0 Cardinals. The next few weeks will tell us a lot about both these teams.

Matt Nagy said he's going back to Andy Dalton at QB when healthy, despite rookie Justin Fields picking up the win over the Lions on Sunday. With Dalton's status still up in the air as of right now, we don't even know who will be starting this week against the Raiders, who could be 4-0 when these teams meet.

We teased this matchup earlier, but it's really worth mentioning again just how good the Cardinals have been this season, especially on offense.

The Cardinals are just the fifth team in NFL history to score at least 30 points and put up 400 yards of offense in each of their first four games and win them all.

Each of those previous four teams reached the Super Bowl (all also lost the SB, but still impressive company).

This week they'll get their second division matchup in a row as they host the 49ers, who will almost certainly be without Garoppolo in this one, meaning Trey Lance would be making his first NFL start.

The Giants may have picked up their first win of the season in OT fashion against the Saints on Sunday, but this Cowboys team looks legit. Seven points may not be enough.

This could be one of the best matchups of the week, as national audiences are treated to yet another great Sunday night matchup. So far this season, it feels like every one of these games have come down to the wire, and this one should be no different as two of the AFC's best will do battle. It might not have the hype of Brady vs. Belichick, but the on-field product should be more than entertaining enough.

Eagles fans will get their first real chance to watch Carson Wentz in action this season, if they so choose, as the Colts will take on the Ravens in primetime. The biggest thing Philly fans will be rooting for in this one? A healthy Wentz.