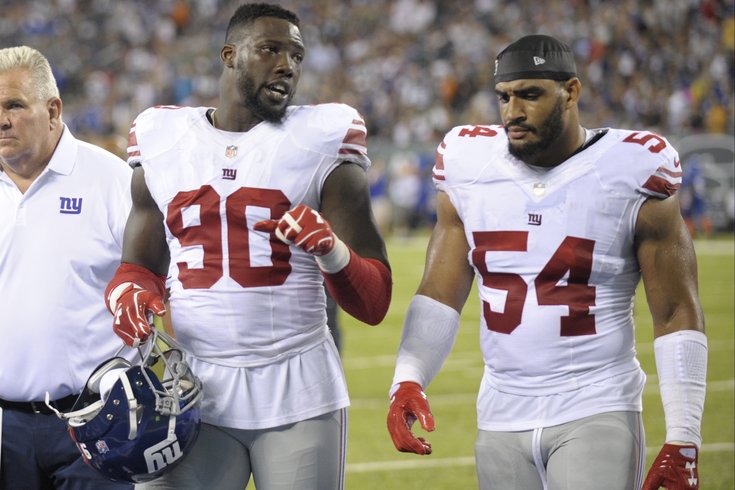 Will Jason Pierre-Paul end up with more sacks or fingers in 2016?

As we noted last week, our Hierarchy/Obituary series will be a little more sporadic this season due to time constraints, but since we're coming off a bye week, we have a little more time than usual this week to bang one out, for the second straight week.

There are still no obituaries. Let's get right to it.

Ugh, the Bears won last week, and I had my sights set on killing them off for the season. If we're being totally honest, I just have no interest in writing about Brian Hoyer, and my guess is that you have no interest in reading about him. Deal? OK cool. Deal. Let's just move on.

Here are the Niners' offensive ranks through the first four games.

In the past, when Chip's offenses were only "bad," the above stats wouldn't look as bad because they ran more plays than any team in the league. With the Niners, even with Chip running a ton of plays, the above numbers are still awful anyway. I'd be very surprised if the Niners aren't picking in the top five in the 2017 NFL Draft.

Many thought the Buccaneers could be contenders this season.

In case you missed our five matchups to watch between the Eagles and Lions this week, the Lions have two major flaws. They don't have a running game offensviely, and with Ziggy Ansah out, they have nothing in the way of a proven consistent pass rusher defensively. Those huge flaws aside, they're an otherwise perfectly average team, which is nice.

The 2012 New Orleans Saints had the worst defense in NFL history, allowing 440.1 yards per game. The 2016 Saints so far have allowed 422.8 yards per game. Breaking: Their defense is bad. In each of the last two seasons, the Saints have won seven games. Their offense remains very good, but not good enough to make up for their atrocious defense. And so, they'll probably win around seven (maybe fewer) games again in 2016 while they lose one more year of Drew Brees.

Against the Browns last Sunday, the Redskins gave up 112 rushing yards on 15 carries to Isaiah Crowell and 53 rushing yards on 9 carries to Duke Johnson. And it's not as if they got those yards on long runs. None of them were over 20+ yard runs. In other words, the Browns (and others) are consistently getting chunks of yards on most runs.

Against the Giants' crappy rushing attack, the Skins gave up 120 yards on 21 carries. Against the Steelers, they gave up 147 yards on 30 carries. Really the only team they've done a good job against in the run game has been Dallas, oddly enough.

On the season, the Redskins are giving up 133 rushing yards per game (ranked 30th in the NFL) and 4.9 yards per carry (31st). This is a defense that is likely to struggle in the passing game without CB Bashaud Breeland and S DeAngelo Hall, but they've also been bad stopping the run.

A season ago, the Giants had the third-worst defense (total yardage-wise) in NFL history. This offseason, they tried to buy their way out of that extreme awfulness, handing out ridiculous contracts to a number of defenders.

• Olivier Vernon, DE, Dolphins: Vernon was a good pass rusher in Miami, but certainly not among the best in the game. Over his four year career, Vernon has averaged just over seven sacks and one forced fumble per season.

• Damon Harrison, NT, Jets: Harrison is a massive 6'4, 350 pound run stuffer. He is a not a threat to get after the quarterback on passing downs, and thus a rotational player, albeit a very effective one at what he does. After signing a five-year, $46.2 million deal, he is the sixth-highest paid 4-3 DT in a league full of 4-3 DT impact players that do WAY more than Harrison.

• Janoris Jenkins, CB, Rams: Jenkins was a good playmaker with the Rams, but he was also susceptible to being beaten on big plays when he gambled. He also had the benefit of playing behind one of the best defensive lines in the NFL in St. Louis. Like Vernon above, he is a good player, but not among the the best in the league at his position. However, the Giants paid him like an elite corner on a five-year, $62.5 million deal, which makes him the seventh-highest paid corner in the league.

The Giants also paid a lot to retain their own:

• Jason Pierre-Paul, DE: The Giants signed JPP to a one-year deal worth $10 million. Pierre-Paul played in eight games last year and had one sack. It is also worth noting that Pierre-Paul only has one hand. So there's that, too.

Add it all up, and the Giants handed out contracts worth a total of $141.2 million to three defensive linemen who combined for 9 sacks last season and have two sacks through four games in 2016. Oh, and the Giants' defense has yet to force a single turnover this season. (Their special teams recovered a muffed punt against the Redskins).

Also, Odell Beckham Jr. has lost more fights with a kicking net this season than he has touchdowns.

The Cardinals are 1-3 and Carson Palmer was concussed last week against the Rams. His status is in doubt for Arizona's Thursday night game in San Francisco against the Chippahs. On the one hand, a short week is the wrong week to have a concussed quarterback, who does not have the full advantage of six recovery days. On the other hand, if you're going to be missing your quarterback, it may as well be against the crappy Niners.

There was a thinking by some (self included) that mayyyyybe Josh Norman might have been a product of the Panthers' front seven. But...

Yeah, the Panthers might miss Josh Norman a little bit.

The love that the Dallas Cowboys' offensive line gets is absurd, to the point where it has become one of the most overrated things in sports. However, credit where credit is due -- Sunday against the Niners, the Cowboys OL absolutely mauled the Niners' front seven. The Niners knew the Cowboys were running it, and couldn't stop it.

The Falcons are gaining 83 more yards per game -- and have scored 31 more points -- than any other team in the NFL.

I reserve the right to skip the teams that just had their bye, and wish to exercise that privilege here.

And on the fourth week, Carson rested.

Saying that a quarterback has "it" is often terrible analysis, however, I do think that "it" at the quarterback position is a thing, and Russell Wilson has it.

Dealing with a sprained right ankle and a sprained MCL in his left knee, the usually mobile Wilson was without his best attribute, and frankly, looked really gimpy.

Again, I'm sorry for this, but Wilson is a winner.

And now he has two weeks to heal up.

On the other hand... The Vikings are 31st in total offense.

Hmmm... What to make of this? It's probably somewhere down the middle.

Maybe... Bradford is playing "don't mess it up" football (and playing it very well) while the Vikings' defense continues to be amazing.