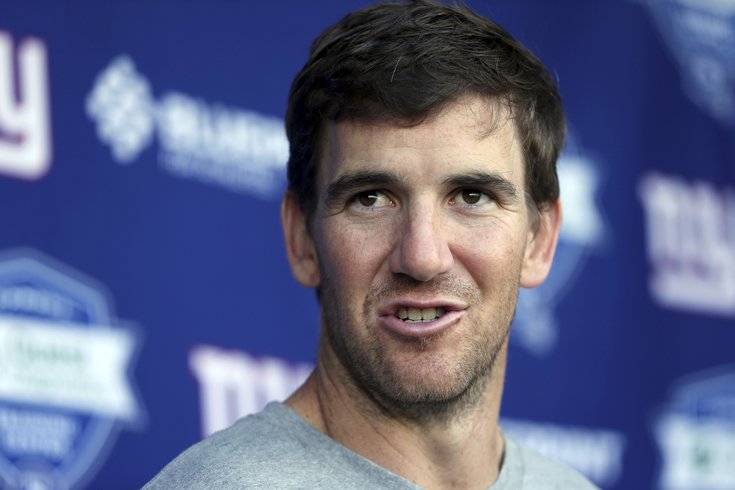 Sometimes you don't even have to write a caption.

Yesterday, we poked a little fun at national football websites for posting "power rankings" any chance they get during the offseason. Today, we'll sell out and do the same. It's our post-draft NFC Hierarchy/Obituary!

The Niners' roster is awful and they play in an incredibly tough division. Meanwhile, Chip Kelly has had his best innovations stolen by the rest of the league and hasn't been able to stay ahead, which partly lead to his demise in Philly.

Plus, I mean, I guess this falls under the bad roster part noted above, but they're likely heading into the season with Blaine freaking Gabbert as their starter.

The Bears went 6-10 a season ago, and they were actually far better than I thought they'd be. With quarterback guru Adam Gase off to coach the Miami Dolphins, it may be a challenge for Jay Cutler to match his rare half-decent season of a year ago.

Over the last two seasons, the Giants have won 12 games. That is more wins over that span than just six teams -- the Bears, Browns, Raiders, Jaguars, Buccaneers, and Titans. Solid company there.

Last season, the Giants allowed 6725 yards, which was the third-highest total in NFL history. In fact, two Steve Spagnuolo-coached defenses -- the 2012 Saints and the 2015 Giants -- rank worst and third-worst respectively in NFL history for yards allowed in a season.

Obviously, it's not just scheme that led to Spagnuolo's atrocious defenses. There have to be bad players contributing to that mess. But consider this -- Spagnuolo's 2012 Saints, which, again, were the worst defense in NFL history, improved to fourth in the NFL the next season under the awful Rob Ryan.

The Giants' solution to fixing their atrocious defense this offseason was to throw elite dollars to nice players.

• They made Olivier Vernon, who has averaged just over seven sacks and one forced fumble per season, the highest paid 4-3 DE in the NFL.

• They paid Janoris Jenkins, a talented but inconsistent player, like an elite corner on a five year, $62.5 million deal, which makes him the seventh-highest paid corner in the league.

• The gave a two-down run-stuffer (albeit a good one) in Damon Harrison, who is no threat to get to the quarterback, a five year, $46.2 million deal, which makes him the sixth-highest paid 4-3 DT in a league full of 4-3 DT impact players.

• They signed JPP to a one-year deal worth $10 million. Pierre-Paul played in eight games last year and had one sack. It is also worth noting that Pierre-Paul only has one hand. So there's that, too.

Add it all up, and the Giants handed out contracts worth a total of $141.2 million to three defensive linemen who combined for 9 sacks last season. And five hands.

Will those guys help? Sure, to some degree. But this defense still stinks, and this team overall isn't good.

In 2015, here's where Drew Brees ranked among other quarterbacks across the NFL:

In other words, he was Drew Brees. Somehow, despite the quarterback putting up the numbers above, the Saints only won seven games. Why? Well, their defense, as it's been in recent years, was atrocious.

On the season, the Saints allowed 6.6 yards per play. The next closest team in terms of awfulness in that metric was the aforementioned Giants at 6.1, who again, had the third worst defense in NFL history last season.

The Eagles will be starting one of three quarterbacks in 2016:

The defense has talent, which will keep the Eagles in games, but this team isn't anywhere near Super Bowl contention in 2016. If Carson Wentz develops and turns into the quarterback the Eagles hope he will be, maybe in 2018.

The Bucs have their franchise quarterback, very good skill position players in Doug Martin, Mike Evans, and Vincent Jackson, and they are building a young offensive line that they hope will come together in time.

They also have a defense with some cornerstones to build around in Gerald McCoy and Lavonte David.

This is a team that is getting closer and is on the right track, but is probably still at least a year away from making any real noise.

Defensively, the Falcons have been in the bottom five in sacks in each of the last four seasons. Last season they had just 19 as a team, which was the lowest total since the 2009 Jaguars, who had just 14. A snapshot of the last four years:

The Falcons' pass rush has been abysmal for a half decade, and they did next to nothing this offseason to fix it.

If Tony Romo didn't get hurt last year, the Cowboys would have gone 16-0 during the regular season, and then went on to win the Super Bowl. Or so I've been told by Cowboys fans.

The reality is that the Cowboys stunk without Romo, but it's not as if Romo was good last year and played a positive role in the rare wins they collected when he was able to go. Romo started four games last season:

• Giants: Romo played well and the Cowboys won, but the NFL admitted that the officials gift-wrapped that win for Dallas. The Cowboys really should have been 3-13 last year, not even 4-12.

• Eagles: Brandon Weeden entered this game in relief of Romo with 5:24 left in the third quarter, and the Cowboys' offense had put up just six points at that point in the game.

Romo is now 36. The Cowboys reportedly would have drafted Carson Wentz at fourth overall if the Rams and Eagles hadn't traded up.

Then they acknowledged that they really wanted Paxton Lynch, and misplayed their efforts to trade up to get him.

And then they wanted Connor Cook, but the Raiders traded up ahead of them and nabbed him.

And then they drafted Dak Prescott.

The Cowboys showed that they were desperate to draft Romo's potential successor. The idea that Romo has four-five years left is laughable.

Every year, I irrationally think this team is going to be better than it is because Matthew Stafford is so talented. Unfortunately, his talent doesn't produce wins like it should. Still, let's keep that tradition alive.

For a team that hasn't had a winning season since 2003, this team is perpetually overrated. What the Rams do have, however, is a formula that has worked for a number of teams in the NFC in recent years -- A good defense and a strong running game offensively.

If Todd Gurley can stay healthy and rookie Jared Goff can be competent, this team might actually win more games than it loses. But make no mistake. They are far behind the Seahawks and Cardinals in the NFC West.

To begin, while I have the Redskins sixth, there is an enormous dropoff after the first five teams. The Redskins are a whole lot closer to being the 14th best team in the conference than they are the best.

In other words, they went 0-4, lost each game by at least two touchdowns, and were -76 in point differential.

Perhaps one of the most underrated units in the NFL is the Minnesota Vikings' defense. In 2015, the Vikings were fifth in points allowed, fifth in third down defense, and fifth in red zone defense.

If not for a missed 27-yard field goal, the Vikings would have beaten the Seahawks in the playoffs last year.

This is a team that is very much on the rise, but they need Teddy Bridgewater to take the next step.

I don't love the Packers' roster, but hang on... Let me see if Aaron Rodgers still plays for Green Bay.

It appears he does.

Arizona had the No. 1 offense a year ago, and the No. 5 ranked defense. In that sense, they may be the most-complete team in football, and I considered putting them atop the hierarchy.

Buuuut... There's just something about Carson Palmer I don't trust. Is that bad analysis?

Josh Norman is a really good cornerback, but he wasn't the reason for the Panthers' success defensively in 2016. The Panthers won last year because of their front seven, led by Kawaan Short in the middle, and their sideline-to-sideline linebackers.

Add in that Carolina has a sturdy, durable quarterback in Cam Newton who finally broke out last season, and the Panthers will be right in the mix again in 2016.

The Seahawks have averaged 11.5 regular season wins the last four years. They have a great defense and a top-five quarterback who rarely takes big hits despite his ability to run with the football.