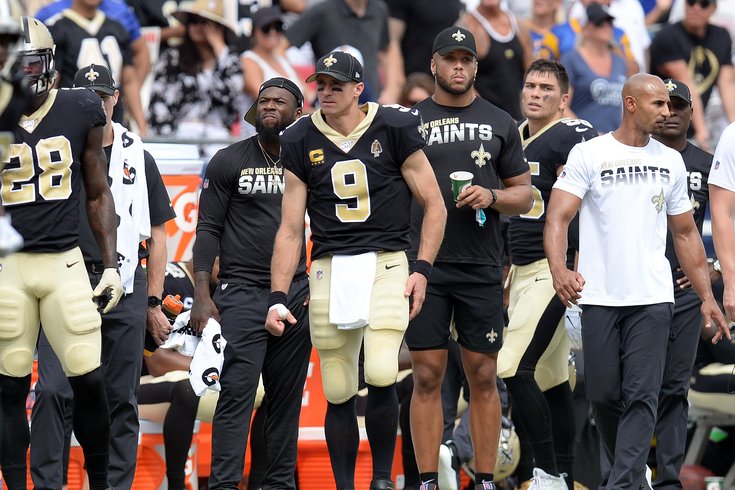 The Saints should still be in control of the suddenly crappy NFC South, even with Drew Brees out for a while.

Week 2 of the NFL season is in the books, and we have a lot of movement in the hierarchy this week. Still no obituaries yet, though. Maybe next next week. Let's just get right to it.

16) Washington (0-2): The Miami Dolphins are trading away whatever is left of their valuable players for a boatload of high draft picks in sort of a Sixers-like rebuild, which I can respect. Washington, meanwhile, could get something decent in return for holdout Trent Williams, who is adamant that he's never playing for them again, but they're basically like, "Nope, we'd prefer to cut off our nose to spite our face, thank you very much. Also, we remain delusional that this season wasn't over before it ever started."

15) Giants: If Eli Manning starts Week 3 against the Buccaneers and the Giants lose, he will have a losing career record. He is currently 116-116.

The idea that Manning is a potential Hall of Famer is insane to me, but I always felt like he'd get in due to his family name, the market he played in, and a group of voters who somehow inducted Morten Andersen over Brian Dawkins.

Now, after being a legitimately bad starter for like seven years, I can't see how anyone can justify voting Manning in.

He's about to get benched for the second time in his career.

14) Panthers: Through two games, Cam Newton has five rushes for -2 yards, and a long of three. While he can make strong throws from the pocket, Newton is obviously at his best when he is a dual threat as a passer and a runner.

He is now in his ninth season, and he has suffered his share of injuries, which have no doubt taken a toll on his body. Transitioning from a guy who ran with reckless abandon to one who tries to win from the pocket is probably a necessary measure to prolong his career, however, it's also going to make him just another mediocre quarterback.

This team is headed for a rebuild.

13) Cardinals (0-1-1): I can already tell that Kliff Kingsbury is going to be a punching bag here. Here's what this coward did on Sunday:

If I may remind you, Kingsbury was the same guy, who, in overtime against Detroit, with the score tied at 27, facing a 4th and 7 from the Lions' 46 yard line with 1:10 left to play, played for a tie and punted.

10) Falcons (1-1): The Falcons played a team in the Eagles that was down their top two receivers, their likely-to-be-heavily-used No. 2 TE, and a whole slew of other players who went down in-game, and they still had to be bailed out by one of the worst drops I've ever seen.

There is some talent to build around in Atlanta, but right now, it's just not a very complete roster.

9) Bears (1-1): What an absolutely bullshit win the Bears picked up on Sunday. Without the following absolutely atrocious roughing the passer call on Bradley Chubb, the Bears don't get into field goal range with a chance to win it.

Just make every play reviewable, with the same two reviews per team (and third if you successfully review the first two). There's literally no reason not to.

8) Vikings (1-1): Let's hear what Chancy in Fargo has to say about Kirk Cousins.

I was rooting for him to throw in a "don't ya know..." but no luck. Anyway, Chancy, the Vikings can't cut Cousins. His contract is fully guaranteed. 18 games down, 30 to go.

7) 49ers (2-0): The Niners put a pair of road wins on the board to start the season, albeit against crappy teams. Still, they're in great position to start 4-0, with the dead-in-the-water Steelers coming to town on Sunday, and the over-hyped Browns visiting the following week.

#Saints QB Drew Brees has a torn ligament in his throwing thumb and he’s going to require surgery, sources say. The timeframe depends on the surgery, but he’s likely out 6 weeks. That’s the initial estimate.

I only caught bits and pieces of Teddy Bridgewater's performance on Sunday after Brees went down, but what I saw wasn't pretty. The Saints' schedule over the next six weeks:

If they can go 3-3 while Brees is away, I still very much like their chances of winning a bad NFC South.

Also, should we check in with Saints fans on whether or not they have an issue with the officials, even though they got smoked by 18?

The New Orleans Saints have been victims of officiating mistakes in their last three games, with a defensive touchdown wiped out against the Los Angeles Rams: https://t.co/MpoNRUZJEu

I don't love this roster, but, you know, they still have Russell Wilson.

3) Packers (2-0): I still don't like this roster, but results are results, and the Packers are 2-0 in their division to start the season, with a pair of very nice defensive performances.

2) Cowboys (2-0): When the schedules come out each year, I like to point out that you would prefer to get your weaker opponents early in the season. Or perhaps better stated, you would prefer to get your stronger opponents later in the season. Why? Well, because the NFL is a league that depends so much on injury luck, early-season good teams becoming late-season bad teams is a more common occurrence than early-season bad teams becoming late-season good teams. And so, you may as well get the bad teams early and the good teams late, since the good teams might lose a quarterback or something.

If you're on board with my logic there, then the Cowboys got a hell of scheduling advantage when the league hooked them up with three games to start the season against straight garbage in the Giants, Washington team, and the Dolphins.

In Week 4, they're going to get the now Drew Brees-less Saints, because of course.

1) Rams (2-0): Remember when we all thought the NFC was loaded heading into the season last year? Well, the Rams are good and all, but when this is clearly the best team in the hierarchy at the moment, the NFC isn't so loaded.