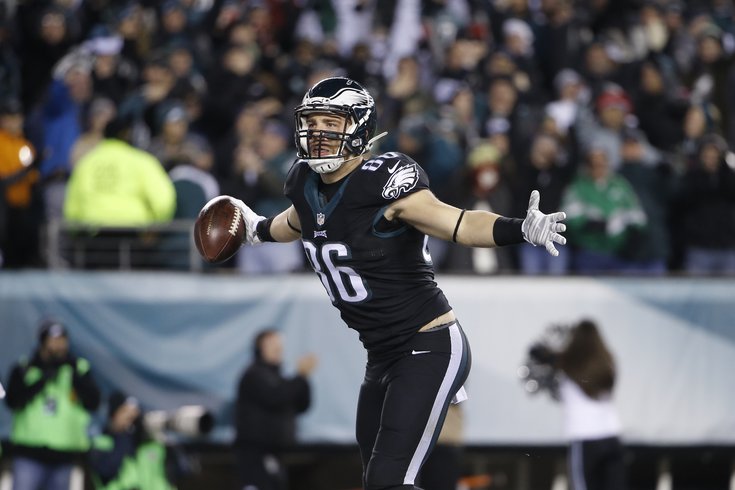 Zach Ertz is still only the sixth youngest projected starting tight end in the NFL.

All week, we'll be taking age inventory of the Eagles' projected starters compared with the rest of the NFL. Today we'll begin with offensive skill position players, followed by the offensive line on Tuesday, the defensive front seven on Wednesday, and finally, the defensive secondary on Thursday.

First, let's take a broad look at the offensive skill positions as whole, and where the Eagles rank, age-wise. For the below chart, we took the projected starters for each team at the following positions -- QB, RB, WR1, WR2, WR3, and TE.

As the chart above shows, the Eagles have the second-youngest skill position players in the NFL, with a caveat. For the above chart, we used Carson Wentz as the Eagles' quarterback, seeing as he is ultimately going to be the long-term starter. If you were to substitute in Sam Bradford, the Eagles' average age would be 25.5, which would tie them with the Bengals for the 11th youngest team.

Here is a list of the NFL's starting quarterbacks, listed in order from oldest to youngest. We included both Wentz and Bradford to show were they fit in compared with the rest of the NFL.

Bradford is right around the median age for starting NFL quarterbacks, while Wentz, at 23, is obviously among the youngest at his position, although older than your typical rookie quarterback.

Of note to the Eagles are the ages of the rest of the quarterbacks in the NFC East. Tony Romo and Eli Manning are now the third- and fifth-oldest projected starters in the NFL, respectively. Their careers are drawing near an end.

Ryan Mathews is the ninth-oldest projected starting running back in the NFL, although he's unlikely to factor into the Eagles' long-term plans.

This offseason, both Mathews and DeMarco Murray were on the trading block. The Eagles were going to trade one and keep the other. When they traded Murray, Mathews became the lead back, out of necessity.

Mathews has only played all 16 games once in his career. When he wasn't missing games, he was often playing with some kind of injury. From 2010-2015, Mathews appeared on the injury report a staggering 53 times. He also doesn't have good hands as Eagles fans witnessed a season ago, so he may not be the fit the Eagles are looking for at running back in Doug Pederson's offense. Pederson has expressed that he wants to move his backs around the formation, where they can create mismatches for opposing defenses. If the Eagles trade or cut Mathews next offseason, they'll save $4 million.

It is also worth noting that the 2017 running back draft class figures to be extremely stacked.

A season ago, the Eagles led the NFL in dropped passes. This is where youth will hurt you. The Eagles' receiving corps are very young, but they are also among the least threatening in the league.

We projected Rueben Randle to beat out Josh Huff for a starting job. If you're of the opinion that Huff will start, he is a year and five months younger than Randle. It should probably also be noted that Nelson Agholor's starting job is far from safe at this point as well.

And finally, we come to the tight ends. For this study, we only used one tight end and three wide receivers for each team, although certainly there are teams around the league whose TE2 is better than their WR3. This might actually be the case with the Eagles, frankly.

In case you're among the disappointed fans who think that Zach Ertz hasn't "broken out" yet, he has 133 catches and 1555 yards the last two years, and is still the sixth youngest projected starting tight end in the NFL.

*There's a good chance Geno Smith might not even make the Jets' final roster if Ryan Fitzpatrick eventually signs a deal, but for now there's really no more realistic player to pencil in as the starter. Fitzpatrick is 33.