NFL Combine positional previews: Offensive guards and centers who could interest the Eagles 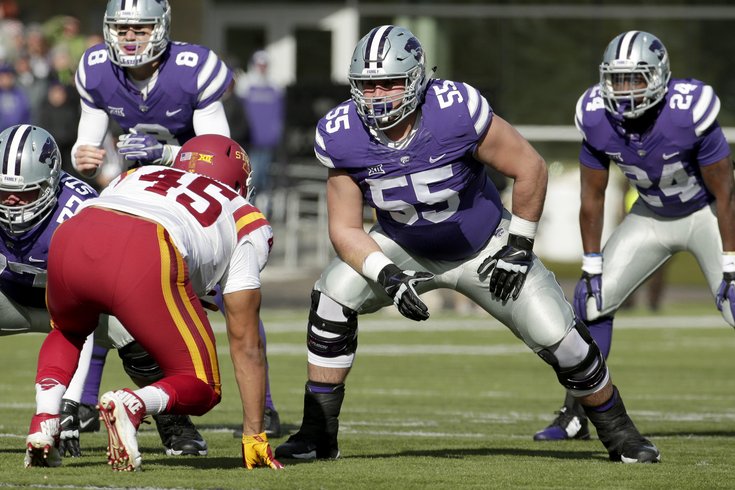 Cody Whitehair is really good... but a guard in the first round? Bleh.

The first day of televised Combine workouts won't be for a week and a half when running backs and offensive linemen will run through their drills on the field at Lucas Oil Stadium in Indianapolis. Monday we previewed the running backs; Tuesday we took a look at some offensive tackles; today we'll cover the guards.

The Eagles are the only team in the NFL not to have drafted an offensive lineman over the last two years, and they haven't drafted a guard since 2012. In 2015, the Eagles' lack of quality guard play often stalled their rushing attack and allowed interior pass rushers like Ndamukong Suh and Gerald McCoy to wreck games. Guard is as glaring a hole on the Eagles' roster as you'll find.

Here are five offensive guards / centers competing at the 2016 Combine would might make sense for the Eagles:

At Kansas State, Whitehair played RT, was moved to LG, then back to RT, and finally he found a home at LT. At just 6'4, he'll probably have to move back inside to guard at the pro level. Some believe he's a first-round pick, and that's where the Eagles would have to take him if they had interest.

In a group of offensive linemen that mostly struggled against talented pass rushers all week during Senior Bowl practices, Whitehair was a rare exception and is getting buzz as the likely first guard taken in the 2016 NFL Draft. He could step in from Day 1 and solidify one of the Eagles' two gaping holes at guard, while also having the versatility to kick out to tackle in a pinch. Still, after the Eagles' season a year ago, to come away with a guard in round one would just be so bleh.

Garnett has over 40 games of experience playing for Stanford at guard. He is not the most athletic guy, but when he gets to the second level he looks to put defenders on the ground. One thing the Eagles lack along their interior offensive line is someone who can move a defensive lineman off the line of scrimmage against their will. That's Garnett. He will not come with a high ceiling, but he should have a high floor. Garnett could be a steady player who may be able to step in and play from Day 1.

Westerman is a former big-time high school recruit (27th in the country by Rivals.com), who is an athletic freak likely to destroy the Combine. He reminds me in many ways of Evan Mathis, in that he is a ridiculous athlete with good technical skills, but his weight room strength often doesn't translate into the ability to move defenders off the ball. If the Eagles continue to acquire athletic types who can get to the second level or out in front of running backs and receivers in the screen game, Westerman will be an appealing target.

Dahl isn't anywhere near as athletic as Westerman above. He's more of a scrappy, hustling type with average athleticism, but the scouting community seems to love him. Like Whitehair above, Dahl has experience at guard, played LT last season, and is likely to move back to guard in the NFL. Doug Pederson mentioned that he wants his offensive linemen to have positional versatility and a little "piss and vinegar" in them. Dahl has both of those traits and could be of interest in the middle rounds.

In 2015, Seumalo played RG and LT. He is a unique player who can play all five spots along the offensive line. Drafting a player to replace Jason Kelce is out of the question, but the Eagles could certainly use a player who can play multiple positions along the offensive line, including center, as they lost David Molk for the season last year with a torn bicep. The Combine medical checks will be of particular importance to Seumalo.