In Goedert, Eagles fans have a Dallas they can actually root for 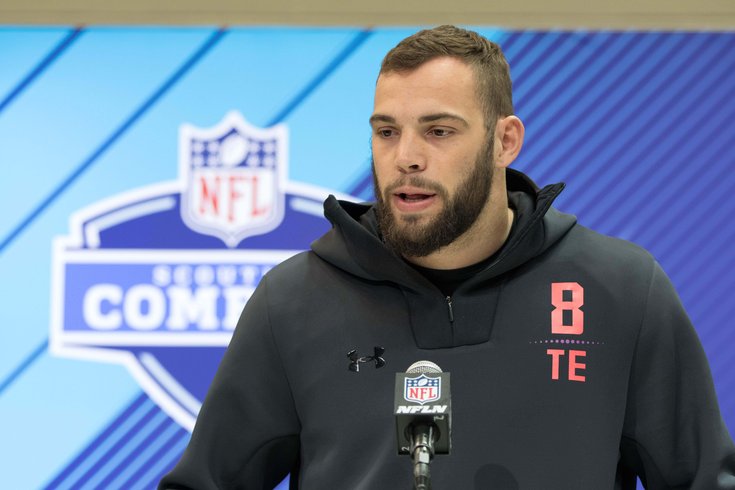 The rare flashes of athletic ability always seemed to be there, lurking, shown in little glimpses here and there. Perhaps the one who saw it last was Dallas Goedert himself.

He was a lanky kid who was extremely coordinated for his height, and dabbled in everything from ice skating to kayaking, soccer to youth swimming; from downhill skiing to learning to balance himself on a unicycle; and, of course, playing the more traditional sports like basketball and football.

Yet, when he graduated Britton-Hecla High School, in Britton, South Dakota, few schools came calling, except for South Dakota State. He wore the tag “lazy,” which can stain any athlete at any level. So no scholarship was offered – rather, Goedert would have to do some growing up, and investing in himself as a walk-on for the Jackrabbits.

Five years later on a Friday night, Goedert received a call from Eagles’ general manager Howie Roseman, telling the 6-foot-5, 256-pound 23-year-old tight end that the Eagles would be trading up to take him with the 49th overall pick with the 17th choice in the second round of the NFL Draft.

Goedert is the Eagles’ first pick in the 2018 draft, after the Birds traded out of the first round on Thursday night. The Eagles are hoping the late-blooming Goedert continues to blossom.

A finalist for the Walter Payton Award as the top player in the Football Championship Subdivision in 2017, Goedert led the nationally-ranked Jackrabbits with 72 receptions, 1,111 receiving yards and seven touchdowns. He had six games with over 100 receiving yards.

He was a matchup nightmare, too fast for slower linebackers to stay with, and too large for smaller defensive backs to defend. Sound familiar?

“We’re really excited about [Goedert] and his fit as a player and a person,” Roseman said. “He was a guy that we had our eye on. He was among the players that we had grouped at 32 [the Eagles’ original pick in the first round]. That’s why we made the move up.”

Goedert had a feeling he would be selected by the Eagles, who met with him at the NFL Combine. He also had contact with Eagles’ tight end coach Justin Peelle and shares an agent with Eagles’ quarterback Carson Wentz, which is super-agent Ryan Tollner.

After Goedert was drafted, Wentz immediately sent his new teammate a text message was “Let’s go homie,” with sunglasses and a pound bump emojis. Then Wentz mentioned something about “getting ready,” and then “we have business to do.”

Goedert had hamstring issues, which is why he bypassed running during his Pro Day at South Dakota State. But Goedert says he can routinely run a 4.6-second 40-yard dash. Eagles’ vice president of player personnel Joe Douglas said he was convinced about Goedert watching him block in South Dakota State’s game against TCU in his junior year.

“When we played them I think they were No. 15 overall in the rankings, so going up there, I really wanted to show what I could do,” said Goedert, who had five receptions for 96 yards, including a 35-yard reception and a touchdown against TCU. “I thought we had a chance to beat them, and we were in the game, until a few late things happened.

“But I was blocking their [defensive ends] with no problem. I think I proved that I can play at any level.”

His performance against TCU helped. His one-handed catch against Drake on a 3-yard touchdown pass catapulted him even higher. South Dakota State couldn’t find gloves big enough for his massive hands, which required a special order for size XXXL to Under Armour.

These last two years, it seems, Goedert appears on a roll.

With Brent Celek being released by the Eagles, and future Hall of Fame tight end Jason Witten announcing his retirement on Friday from the Cowboys, Roseman felt compelled to move up ahead of Dallas to snatch Goedert — whom, ironically, is named after the Eagles' most-hated rival.

“Yeah, the Cowboys were sitting there at 50, and I think Philadelphia may have thought that as well, and traded up before them,” Goedert said. "So that was definitely something in the back of my head when Jason retired, the Cowboys would need a tight end."

As for his unicycle exploits, the Eagles haven’t told him he can’t stop yet.