NFL Draft rumors: Eagles considering a trade up for a wide receiver 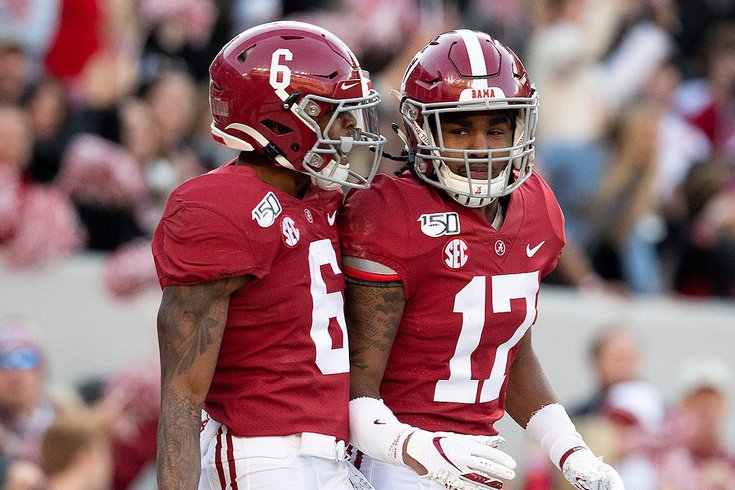 It seems like we just finished writing a story about how there was a good chance that the Eagles luck into one of the two Alabama wideouts, Jaylen Waddle or DeVonta Smith, falling to them at 12 overall — probably because we did just write about that — but it's suddenly beginning to look like Eagles may have to trade up if they hope to land one of the top pass catchers in the 2021 class.

And the latest report suggests that the Eagles, who already traded back out of the sixth spot (and picked up a future first-round pick in the process), could be considering doing just that. But not for the receiver you may think.

ESPN's Dan Graziano and Jeremy Fowler report that rather than the Eagles hoping one of Waddle or Smith fall to them at 12, they could take matters into their hands and move up the board to get their guy — and it isn't the reigning Heisman winner.

There’s sizable buzz about Alabama’s Jaylen Waddle as a playmaker who could be the second wide receiver taken. “He’s the best player in the entire draft,” said an NFC personnel executive.

We’re hearing Waddle enters the draft believing his chances to go in the top 10 are strong, so any trade up might require receiver-needy teams in the teens to move accordingly. Receiver positioning is always tough to predict because there are so many good ones, and teams know they can score big on Day 2 playmakers. But enough teams see shades of Tyreek Hill that Waddle won’t fall far.

There are teams ahead of Philly in the draft order who believe the Eagles are trying to trade up from No. 12 to make sure they get the speedy Waddle. Part of the issue here is that the Eagles, following their trade down from No. 6 to No. 12, are now parked directly behind NFC East rivals Dallas and the Giants in the draft order, and obviously aren’t going to be able to trade with those teams. They believe (accurately) that the Giants would be a threat to take Waddle at No. 11 if he fell that far, so if they want him, they have to get up to No. 9 or higher. Detroit at No. 7 and Carolina at No. 8 are two teams that would be interested in trading down and could take the Eagles’ call.  [espn.com]

There have already been reports of the Eagles considering a move back up into the top 10, as well as a recent report from Albert Breer that he's been hearing some rumblings connecting the Birds and Waddle. Now, it seems like if they want to guarantee they land him, they'll have to make a trade in order to do so.

After three quarterbacks likely go with the top three picks, Florida tight end Kyle Pitts is expected to go fourth overall to the Falcons followed by Ja'Marr Chase to the Bengals. Prior to trading back, the next pick would've belonged to the Eagles and they could've had their choice of Smith or Waddle. Now, the Dolphins own that pick, and Fowler and Graziano go on to suggest that if the Bengals take Chase, Miami would go after one of the 'Bama wideouts, likely Smith.

That would leave five picks standing between the Eagles and their slot at 12. At that point, it would be too risky to wait and hope that Waddle falls to them, especially with some WR-needy teams standing in their way.

Maybe, if the Eagles would be happy with either receiver, they wait until the first one of the duo is off the board, then they strike a deal to move up and get the other. Of course, once one of them is selected, the price to move up for Philly would likely only increase. But if Roseman is able to find a way where he's able to get one or the other — either of whom would seemingly be a solid selection with the sixth pick — while still keeping that first-round pick he acquired in the trade back to 12, then it's really hard to argue with how he handled the situation.

Unfortunately, that scenario playing out now appears to be far from a lock.