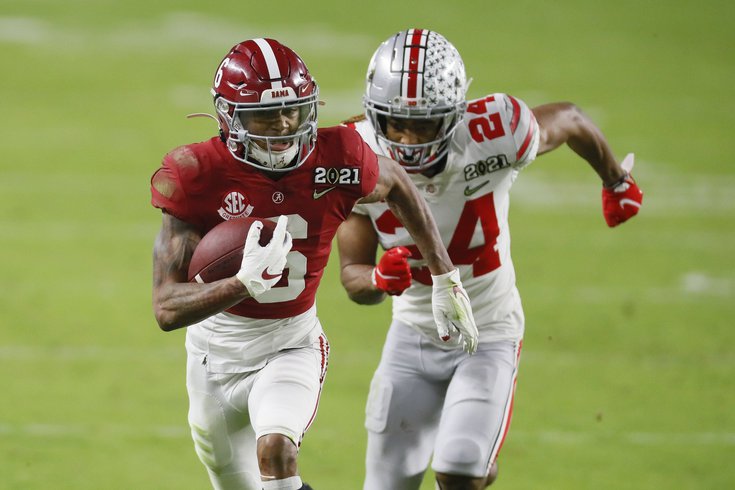 The 2021 NFL Draft is now two days away, so let's go ahead and put out our final Philadelphia Eagles-only mock draft of the season. As a reminder, after various trades, the Eagles currently have 11 draft picks this year, with two in the third round, three in the sixth round, and two in the seventh round.

To note, in previous mock drafts, we did not repeat any players. We will repeat them in this final version.

In 2019, Smith led Alabama in receiving yards and TDs, despite playing alongside a pair of first round picks in Henry Ruggs and Jerry Jeudy.

Smith is a smooth route runner, he gobbles up yards after the catch, he has great hands, and he can make spectacular catches in traffic. The concern that teams are going to have about Smith is his lack of size, at a rail-thin 166 pounds. Can he beat jams at the line of scrimmage against big, physical corners? Can he be durable? Certainly, he plays much bigger than his slight frame, as you can see here.

Basham is a thick, powerful rusher who gives off some Brandon Graham vibes, who plays on both sides, can also shift inside on obvious passing downs, and is a good run stopper. He also has a good repertoire of pass rush moves, and he's a high-energy player.

The general feeling is that if the Eagles take a receiver in Round 1, they'll take a corner in Round 2, or vice versa. However, there are a cluster of edge rushers who could be available at pick 37, like Basham, Penn State's Jayson Oweh, Washington's Joe Tryon, Oklahoma's Ronnie Perkins, or if guys like Miami's Jaelan Phillips or Gregory Rousseau fall out of the first round.

Campbell is something of a wildcard in this cornerback class. He has coveted length (6'1) and rare athleticism (4.36 40). However, the results on the field haven't always matched his impressive size and athletic measurables, and there are concerns about his technique and consistency.

In three years after enrolling at Georgia as a five-star recruit, Campbell only had one INT and 10 PBUs in 31 career games. His first career college INT came in his 29th game, though it should be noted that Campbell has played against his share of outstanding college receivers. Some highlights:

Campbell would benefit from landing with a team with a good defensive backs coach. Under the previous staff, I would not recommend that the Eagles draft him. However, new defensive coordinator Jonathan Gannon has gotten a lot out of his defensive backs in the past, so the Eagles are arguably better equipped now to maximize a player like Campbell's potential.

Some believed at varying points that Campbell could be a first-round pick. No way. You can't take a guy Round 1 who has one career pick and 10 pass breakups, especially when opposing offenses weren't actively avoiding throwing at him. But he is an intriguing high ceiling type who could make sense for the Eagles on Day 2.

Smith's fit with the Eagles is pretty straightforward. He is a brick wall offensive lineman with left tackle and left guard experience who anchors against power, and moves the line of scrimmage in the run game. In the NFL, he'll very likely play guard.

And while we're at it, replace Mel Kiper with whoever produced this video:

The hard part with Smith is determining how healthy he is, as he has had recurring issues with blood clots in his lungs. They didn't seem to bother him in his final two seasons at Tennessee, but certainly they will affect his draft grade with teams.

Under Jim Schwartz, the Eagles liked safeties with cornerback experience in their backgrounds, and linebackers who used to be safeties. To be determined if those trends continue under a new staff, but Deablo is a guy who should be able to cover tight ends and running backs at the next level.

Stevenson is a bulky runner who would give the Eagles a short-yardage presence. In his two seasons at Oklahoma after transferring from a JUCO school, Stevenson had good numbers in limited action.

Stevenson has a 6-game suspension (for a positive THC test) to his credit, so teams will have to investigate that. I like him as a power complement to the more dynamic Miles Sanders, and as a guy who could also even play some fullback.

Kaindoh is a length-athleticism freak and former five-star recruit with upside who has shown more potential than actual production. In four seasons at FSU, Kaindoh had just 59 tackles, eight sacks, and one FF, partly because of injuries and several scheme changes. Still, that's a decent season for a top prospect. Over four seasons and 31 games? 😬

The production that Kaindoh does have has come because of his physical traits, as opposed to a repertoire of pass rush moves, or savvy. His game will have to be refined at the next level. A look:

It should be noted that Kaindoh was rewarded this past season for his hard work, and is generally thought to be a high character player, so it's not as if there are red flags in that regard.

The Eagles should probably stop taking high-upside developmental players on Day 2 who won't contribute immediately, but if there's a position where that approach would maybe make some sense, it would be at DE, on Day 3.

Round 6: Eagles trade this pick to the Chargers for WR/RB/KR Joe Reed

In each of the last two drafts, the Eagles have traded a Day 3 pick for a veteran player.

• In 2020, they moved back 20 spots in the sixth round to acquire WR Marquise Goodwin, a trade that was later determined to have never happened, but whatever.

• In 2019, they traded a seventh-round pick for DT Hassan Ridgeway.

Reed did not have any receptions in the regular offense (on 1 target), but he did carry the ball five times for 29 yards and a TD, mostly on jet sweeps. Here's that TD:

The Chargers have a new coaching staff, and of course, the Eagles hired offensive coordinator Shane Steichen away from the Chargers. The Eagles could use some kick return competition for Boston Scott, as well as any dynamic pieces they can find for their offense.

Surratt is a big, physical receiver with good hands, body control, and contested catch ability, along the same lines as Alshon Jeffery and J.J. Arcega-Whiteside (college version). He does not possess impressive speed.

Also like Arcega-Whiteside, Surratt has an impressive off-the-field resume, as he was once committed to Harvard, before deciding he could get a similar education at Wake Forest while playing football in the ACC. In high school, he was a star basketball player, and the Valedictorian of his senior class.

Jeffrey Lurie is going to want to take this guy on Day 2.

A few weeks ago, we profiled the lone punter on the Eagles' roster, Arryn Siposs, and came to the conclusion that the Eagles should give him competition in training camp.

Brandon Gowton of BGN and I also discussed each of our picks in podcast form. Check that out as well if you're at the gym or something, please and thank you. And here's the iTunes link. Review, subscribe, etc.

Note: As of 6:30 a.m., the podcast has been recorded, but is not actually published yet. It should appear soon.