Report: Eagles will trade Zach Ertz before the NFL Draft is over

According to one NFL insider, the veteran tight end could be on the move any time between now and this weekend. 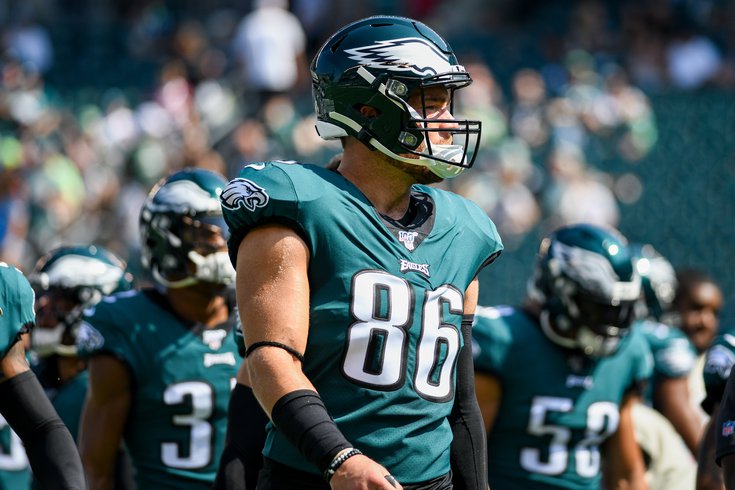 It's been just about five months since Zach Ertz gave what seemed at the time like a tearful farewell to Eagles fans and Philadelphia as a whole following the end of a disappointing 4-11-1 campaign that saw both the end of the Doug Pederson Era and the Carson Wentz Era.

Now, it appears the end of the Zach Ertz Era may finally be on the horizon.

Up until now, there had just been a lot of speculation that the Eagles would trade him away, some speculating that it would happen before free agency in order to free up some added cap space for Howie Roseman and Co. to work with. Other believed it wouldn't happen until the summer when that cap relief would actually be at its highest. As it turns out, the Eagles could be trying to maximize the value of an Ertz trade by dealing the eight-year tight end ahead of (or during) the NFL Draft this week.

Here's more from Adam Caplan of Inside the Birds (with a tip of the hat to BGN's Brandon Gowton for the transcription) during their recent live mock draft...

They’re going to trade Zach Ertz. And it’s going to be — the way that I’ve said this in the live stream, there are personnel people around the league who think that Ertz will be traded no later than early in the draft. Like, when I say early, it certainly could happen — the way I heard it — there’s a very realistic chance it actually happens on the lead-up. Because you don’t want to wait until teams on the board … and, I know it’s not a great tight end draft. But what if you’re taking to a team that likes [Pat] Freiermuth, you’re not going to know that. Let’s say you’re talking to a team, you’re Howie Roseman, the GM, and you’re talking to a team, you don’t know who they like at tight end. So, God forbid you wait, and the team fills a need, then you’re out of luck. He’s played it right in that he’s waited as far as he could. It’s going to happen and there are some teams I’ve talked to — I don’t know who they talked to with the Eagles, but they seem to think he’s going to go … it could be, very realistically, today’s Monday? It could happen Tuesday, Wednesday, Thursday leading up. It could happen. But it’s going to happen by the end of the draft for sure.  [Inside the Birds]

There has been talk all offseason — and actually much earlier than that — speculating that 2020 was the veteran tight end's final year in Philadelphia. Looking for a new contract but still playing out the final year of his current deal, it seems like the Birds are prepared to turn over the starting job to Dallas Goedert and part ways with one of the best players in franchise history, a homegrown talent who overcame early struggles to emerge as one of the best tight ends in all of football, and a key contributor to the Eagles only Super Bowl campaign.

Moreover, he's a player who has embraced the city and publicly stated at the end of last season, despite how terribly things were going for the organization, that he didn't want to leave and wanted to finish his career in Philadelphia, not because he's still under contract and wanted to give a generic non-answer, but because this is where he now calls home.

The latest from Caplan is by far the most assertive report we've seen so far regarding Ertz's future here in Philadelphia. It's also the first we've heard on the subject in over a month, with the last reports on Ertz coming out just a day before free agency opened, with the NFL Network reporting that Ertz had been granted permission to seek a trade. In the two weeks prior to that, there had also been several other reports from the NFL Network, the first suggesting that a trade could happen "in the coming days" (it obviously didn't) and one 13 days later saying that the Eagles "weren't in a rush" to trade Ertz (they obviously weren't).

So, if a trade is finally imminent, what might the Birds be able to get?

Conveniently, our own Jimmy Kempski took a look at some potential Eagles trade candidates and what they might be able to bring back in return to Philly. And he wasn't too high on Ertz's value...

If the Eagles had previously gotten even a decent offer for Ertz (say, a fourth-round pick), he'd almost certainly already be gone. Despite reporting that a bunch of teams have inquired about Ertz, his market has clearly been soft. That makes sense, for a number of reasons:

What kind of compensation could the Eagles expect in return? As we've maintained all offseason, it's not out of the question that the Eagles will simply have to release Ertz. But I'd rank it like this:

Beyond that, Jimmy noted that there's an added benefit to waiting to move one from Ertz, largely because of the aforementioned cap savings that would come by keeping him around until June 1 (though if they can get a deal done before that, they certainly should).

If the Eagles traded or released Ertz before the start of June, they would save $4.95 million against the cap, but Ertz would still count for $7.77 million in dead money against the cap. If they waited until after June 1, the dead money hit for 2021 would drop to $4.22 million, with $3.55 being punted to next season. That would mean the Eagles would save $8.5 million in 2021 instead of just $4.95 million. Unfortunately, because the Eagles already used both of their June 1 designations (Alshon Jeffery and Malik Jackson), they'd actually have to wait for June 1 to make that move, and hoping for a trade that late in the offseason is extremely risky.

That being said, if Roseman find the right, whatever he deems that to be, between now and the end of the draft on Saturday, it sounds like he's ready to make a move.