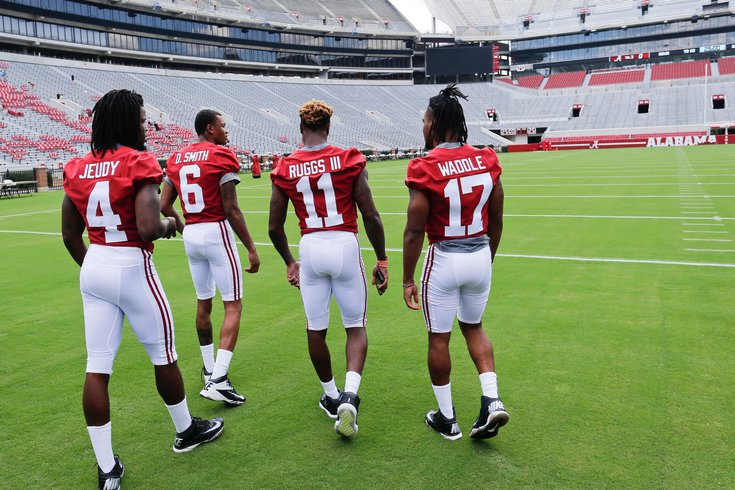 Question from Negadelphia: Where is Zach Ertz's most likely landing spot?

The list of teams with (a) a need at TE, (b) a reasonable chance of contending, and (c) at least $8.25 million in cap space to take on his contract isn't very long.

That's it. That's all I got. You could maybe squint and make arguments for some others, but the point here is that the Eagles aren't drumming up a bidding war for Ertz at this point.

If I were to do a mix of top 10 receivers from this year and last year, I'd go:

Email from Tom: The “Howie is a bad GM” take is a bit lazy, no? THIS offseason, what moves from Howie were blatantly awful? Because he handled the Wentz deal as best as one could. Grabbed a cheap LB and S, who have some upside. He grabbed Miami’s (and not SF’s) first-rounder for 2022. And he still may get “his guy,” because he’s not an idiot and obviously has thoughts about trading back up. The net result, even in the worst case scenario, would be a “win” from a valuation point of view. Got his team under the cap.

He "got his team under the cap" because he had no other choice. Being over the cap isn't an option. As expected, they restructured the contracts of a slew of aging players, kicking the can down the road into future years, and as a result, they'll have about a dozen bad contracts on their books in 2022 and in many cases, beyond. There's no skill in that.

They signed a couple safeties and a linebacker, as you noted. Meh. Those signings are fine, but let's not get crazy. They're one-year deals on players to fill immediate holes in a non-contending season. There are no gold stars for that. Not noted was the signing of an aging, cooked backup quarterback to a completely illogical contract.

There is no praise to be handed out for the Wentz deal, either. That trade was the product of an organizational failure, and the return wasn't exactly a coup. It was essentially the expected compensation.

I do think the trade back from 6 to 12 was logical, at least if they didn't like whatever quarterback might still be available at pick No. 6. So, yaaaaaayyyy, they moved a super valuable asset that they only got because they went 4-11-1, for other valuable assets.

So that's "THIS offseason," as you put it.

The three years prior, they consistently and repeatedly whiffed on draft picks, free agent acquisitions, player trades, and contract renegotiations, detailed here. Those misses resulted in the old, bad, expensive roster that is going to take multiple years just to tear down before they're in a good position to fully rebuild.

There's no question that Howie did an outstanding job taking a team in bad shape after the Chip years, and quickly building a Super Bowl winner. Since then, he has indeed been a bad GM. So, respectfully, I would say that it's less of a "lazy take," and more just an obvious conclusion based on the results of the last three years.

Question from bradco: The one position of need that nobody is talking about is pass rusher. Shouldn't the Eagles be focused on getting more pressure on the QB? Any ideas for a 3rd round pass rusher?

Really, you could make an argument for a pass rusher in almost every round.

Round 1: Kwity Paye, for example. I believe there will be better prospects available at 12 than Paye, and he would be a bad pick, but we know how much the Eagles value defensive linemen.

Round 2: We covered this in our final Eagles-only mock draft but there could be a cluster of players who go in the 37th pick range, like Wake's Boogie Basham, Penn State's Jayson Oweh, Washington's Joe Tryon, Oklahoma's Ronnie Perkins, or if guys like Miami's Jaelan Phillips or Gregory Rousseau fall out of the first round.

Round 3: There you're looking at guys like Houston's Payton Turner, the two Pittsburgh rushers (Rashad Weaver and Patrick Jones), etc.

And then there's decent depth at DE on Day 3. If I had to pick a position that I think the Eagles are most likely to double dip on, the obvious answer is CB, but I think DE is right there, too.

Question from Teddy: Given that the Eagles have the most picks of any team this year, and some major draft capital for next year, do you think they package anything to move up? Even into end of round 1 or round 2? Or are they just so broke that they need to fill out the roster with cheap rookies?

I don't know that moving up in Round 1 makes a lot of sense, despite rumors that they're investigating that possibility. But thereafter, yes, I think that using those later-round picks to move up is going to be a theme for the Eagles in this draft.

Question from DB: How many 2022 picks does Howie acquire this weekend?

Questoin from EFNJ: You get a call from Washington, who want to move up from 12. They offer 19 and next year's one. The Ravens offer 27 and 31 this year. Which one do you do and why? I hate the idea of trading back again but getting three top 37 players is tempting.

No way on the Ravens trade. The math adds up on the draft value chart, but the player you can get at 12 would be a much better prospect than who you'd get at 27 and 31. If they lacked picks, then I'd be more inclined to consider something like that, but they already have 11 of them this year, so no.

I'd do the Washington trade in a heartbeat.

Question from GoBirds: If they end up trading Dillard for a late pick or cutting him this offseason, is he the biggest first round bust for the team in the last 10-15 years? Or is he second to Marcus Smith?

I've been as critical of Dillard as anyone, but there's no way they'll just cut him this offseason. I don't like his chances of becoming a good starter in the NFL, but he's at least worth hanging onto and giving him a chance to show something this year, plus it would actually cost more to cut him than keep him.

As for busts, Danny Watkins holds the title of biggest bust in the last 15 years, then Marcus Smith, and we'll see how the rest of Dillard's tenure here plays out.

Question from Kicker MaGoo: Will you ask Coach Nick (Hi everybody!) if he will bring back the media kicking competition.

I think it's gone for good. My understanding is that the sponsor no longer wanted to do it because the media folks didn't promote it to their liking, which I get. The year I won, I promoted the crap out of it.

The years I lost? Not so much.

Question from Steffan: Draft night... What is the room set up and go to food for you?

Before I covered the NFL as a reporter, back when the draft was on Saturday (rounds 1-3, if I recall correctly?) and Sunday (rounds 4-7), I usually spent the entirety of that weekend cleaning my house, and getting my life organized, etc., while the draft played on every TV in the house. Usually that included a whole lot of takeout. Pizza, wings, etc.

These days, I can really only sit and watch the first round until the Eagles pick. Thereafter, for the rest of draft weekend, I'm pretty much working non-stop. Pre-COVID, media watched the first round of the draft in the Eagles' auditorium, and we were treated to free food from the cafeteria. I do miss that.

Media setup in the Eagles’ auditorium for the draft: pic.twitter.com/r7YZ7LzXxM

I would skip going to the Eagles' facilities on Days 2 and 3 because I can work faster from home. At home, I would say that my attention is more focused online than it is on the TV. In fact, the TV I'll have on will be this crappy little 24 incher in my office. Here's where the sausage is made. 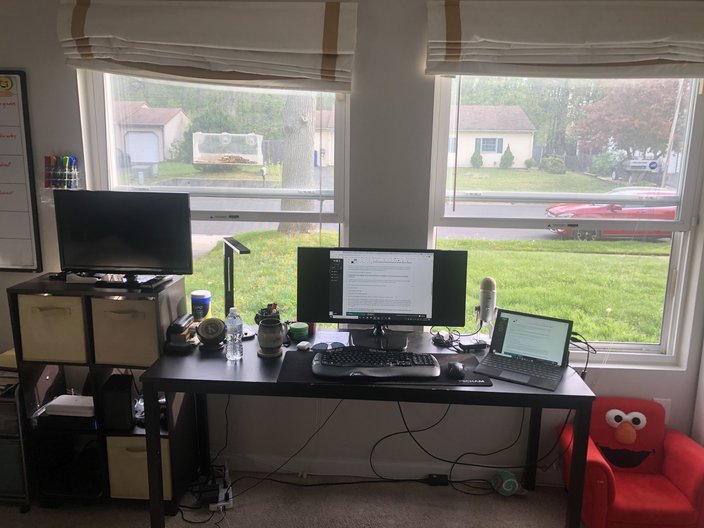 As for food, probably just stuff that won't make me tired.

Question from DB: I saw Kyle Pitts say no wiz on a cheesesteak, that it's for tourists. I'm not a Philly guy. Is this true? If so, what's the cheese preference for the locals?

Yeah, he's right. Wiz is gross on a cheesesteak. I can't make a definitive statement on the correct cheese, because I think there are multiple good options, but I'd go provolone.