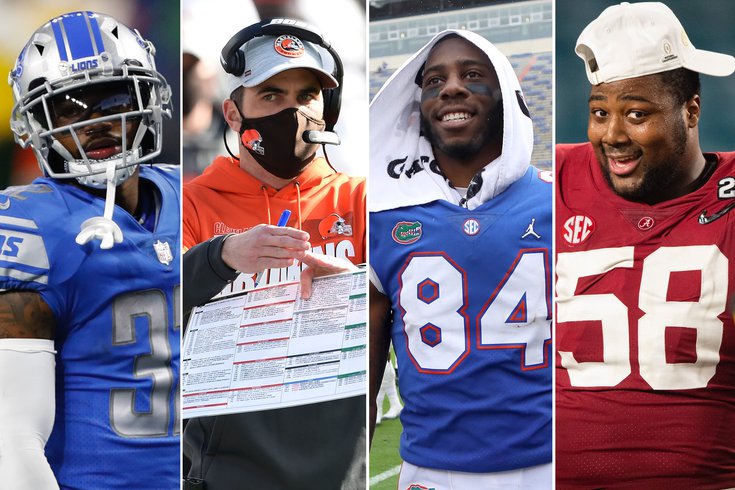 They’re all from the area.

Traditionally, when talk about Pennsylvania football was broached, it always involved the western side of the state. The Philadelphia area had always been considered “the basketball side,” producing all-time greats like Wilt Chamberlain and Kobe Bryant.

Over the last decade, however, there has been a seismic shift in football in the Philadelphia area.

Not only are iconic college football coaches like Nick Saban coming up to check out Philadelphia-area talent, but the area has permeated every level of NFL football from the field on up.

“I think for years when people spoke about football in Pennsylvania, they just limited it to Western Pennsylvania, and specifically, the area around Pittsburgh,” said Hall of Fame football writer Ray Didinger. “There was a period of time where you had the best quarterbacks in football come out of one area of the country, from Johnny Unitas to Joe Montana into the 1990s.

“I remember asking a number of them why all of the great quarterbacks came from Western Pennsylvania and they didn’t know. I remember asking Bill Walsh about it, and he told me Western Pennsylvania was just ‘Football country.’ The best athletes were funneled into one sport, and if you were the best of the best, you played football and you played quarterback. It was a culture that brought the cream to the top. To Bill Walsh, it made perfect sense.

“For a long time, it was true. That’s changed. Around here, the success you see some of these high school programs are having, and the success some of these coaches are having, has created a football environment in this part of the state that’s comparable to what was in the west for all of those years. It’s much more even between the Philadelphia area and Western Pennsylvania.”

St. Joseph’s Prep has become a national powerhouse for close to a decade. College coaches flocked to the area to check out the talent. Four players from Prep are currently on NFL rosters: 2020 second-round pick D’Andre Swift, with the Detroit Lions, the Atlanta Falcons’ Olamide Zaccheaus, Green Bay Packers’ Jon Daniel Runyan and Houston Texans’ John Reid — and more seem to be on the way after Prep just captured its third state title in four years with a core group of players that include Ohio State-bound Kyle McCord, as well as Jeremiah Trotter Jr. and Marvin Harrison Jr.

“Philly always had talent, I think it’s more college coaches are beginning to recognize it, and you have programs like Prep gaining national attention, which forces the other programs in the area to raise their level,” Swift said. “Coaches have more connections because of that, and it’s a matter of having the right support system around them.

“We had it at Prep. They have it at (Archbishop) Wood. Now you see other programs, like Imhotep (Charter) and Northeast, gaining that attention.”

Judge, who did an amazing job in his first year as a head coach in transforming the Giants in an upward direction, is one of the major reasons why Philadelphia football has gained national respectability.

“You look at where the guys are coming out in the draft, and there is a high level of talent from the good coaching from Southeastern PA,” said Judge, a Lansdale Catholic graduate. “That comes from every level when I played in the area and how we were taught to look at the game, come from the Philly area.

"There has always been talent and always the mentality there, they’re just getting noticed now. People do have to look at Philadelphia as a football city." —Joe Judge

“That’s held up to a lot of the guys who have come out of the area. I’m a big believer in understanding the region where a player comes from. One of the first things I look at, no matter who the prospect is, when we first start talking to them is I want to know where their hometown is and I want to know their high school.

“It gives you an idea of the culture they come from, what they’ve been exposed to and some of the things they value about the game. What you get from Philly are a lot of guys who are mentally tough, and that’s the culture they were brought up in.”

Judge said the talent was always in the area. What started it was Gil Brooks at St. Joseph’s Prep, followed by what Gabe Infante built on top of that and what Tim Roken continues. Albie Crosby, now at Neumann-Goretti, built a similar culture at Imhotep Charter, producing pros like D.J. Moore and Yasir Durant.

For years prior to that, legendary George Washington coach Ron Cohen produced NFL players Sharrif Floyd and Jameel McClain, who won a Super Bowl with the Baltimore Ravens in 2012.

“Once that started, people around the country came flocking to the area and now high school programs have grown,” Judge said. “There has always been talent and always the mentality there, they’re just getting noticed now. People do have to look at Philadelphia as a football city. I remind my friends from Pittsburgh that all of the (high school state) championships are coming from District 1 and District 12.”

Stefanski, a St. Joe’s Prep grad, happens to be very entrenched in Philadelphia basketball lore being the son of Eddie “The Shot” Stefanski. He grew up an Eagles’ fan, but he sees the attention being brought to Philadelphia football.

“I was fortunate to play under Gil Brooks, who continues to be a mentor to me, and what Gabe took Prep to and what Tim is doing with Prep today, tends to affect the rest of the region,” Stefanski said. “I’m the first one banging the table for the Philly guys, because I know they’re tough.

“I’m very proud of the fact D’Andre Swift came from Philly, and Kyle Pitts is being considered among the top picks in the draft. That’s great. You always heard it about Philly point guards, with their tenacity and toughness. That reputation is being applied to football.

“There is a pride factor there. You can rattle off the great quarterbacks throughout all of those years that came from Western PA. It’s just hard to put a finger on where (the talent flood) started in Philly, but it’s here now and you see it in the makeup of the players coming through the city. I can tell you NFL coaches are looking for Philly talent. They know what they’re going to get in that player.”