NFL Draft rumors: Eagles could literally do anything with their first round pick

Eagles simultaneously rumored to be trading both up and down 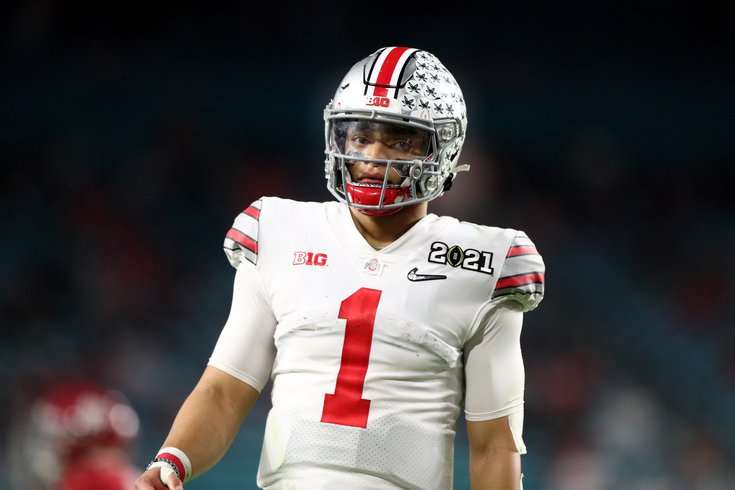 There is almost too much information out there.

The Eagles are still probably going to take a player with the 12th overall pick during the first round of the NFL Draft on Thursday night — possibly a wideout like Devonta Smith or Jaylen Waddle, or a cornerback like Patrick Surtain II or Jaycee Horn.

But fans need to prepare for something else potentially happening: the Eagles making another big trade.

Howie Roseman said as much himself last week when he spoke alongside Nick Sirianni and Andy Weidl. He is having conversations with pretty much every team — those in front of the Eagles and those behind them.

With the draft just two days away, it should come as no surprise that there are simultaneous rumors swirling that the Eagles will both be trading up and down. Here's a look at some of these, as well as the potential that they shock the world by taking a quarterback.

The Lions are a team that has more or less made it known that the No. 7 pick could be available Thursday, and it sounds as though the Eagles are very interested — but it all depends on their draft board correlating with who is available when Detroit is on the clock.

It also depends on if the Eagles can stomach the compensation for moving up, with QB-needy teams like the Patriots or Raiders potentially having more of a need to move up to take someone like Mac Jones or Justin Fields — if they're still on the board.

Still, the Eagles are kicking the tires on the No. 7 pick and others, and they certainly have the draft capital to make yet another jump.

Per NFL Network's Tom Pelissero, the Eagles "have made a lot of phone calls" trying to trade back into the top 10 of the draft -- less than a month after moving down from No. 6 to No. 12.

Pelissero did point out that it's Roseman's nature to do his due diligence in calling "everybody, every year, with every pick." Roseman has been one of the most active movers with trades involving draft picks, trading 34 times as head of the Eagles' front office since taking over in 2010 (not counting 2015 when Chip Kelly was head of the Eagles' personnel department). The Eagles have already made a trade with this year's draft, deciding to move their top-10 pick (No. 6 overall) to the Miami Dolphins for the No. 12 overall pick, a 2021 fourth-round pick, and a 2022 first-round pick -- moving back six spots and out of the top 10. [CBS Sports]

If they move up, who might they target? Sports Illustrated's Albert Breer has heard a few names tossed around:

As we said in the MMQB column, the Patriots have explored going up (presumably for a QB) and the Eagles have too (my belief is it would be for a corner), but others in that range have looked at the idea of making a short move into the top 10 for an offensive lineman. So right there, you can see the scarcity of top-shelf corners (Patrick Surtain II, Jaycee Horn), and the drop off from the top two linemen (Penei Sewell, Rashawn Slater) to the second tier creating a little tension. [Sports Illustrated]

The Eagles have only two quarterbacks on the roster, and there are five good ones expected to go in the first round this year — as well as a bunch of backup caliber players to be had in later rounds. Drafting a QB is something that the Eagles have seemed extremely schizophrenic about, as they looked to be considering one at No. 6 before their trade with the Dolphins after they dealt Carson Wentz to the Colts.

Just because they're back in the 12th spot doesn't mean a first round QB isn't possible, particularly after Sirianni and Roseman simply refused to give Jalen Hurts a vote of confidence when they spoke to the media.

For what it's worth, CBS Sports' Jeff Kerr, in the story we quote above where he ponders the Eagles trading up, says that a QB being available in the right spot could interest Philly in a move up.

They also could just be pretending to be interested in a quarterback..

The Eagles could be content to make another move backward to add assets for their rebuilding team. After all, the more bullets Roseman can fire, the better chance he has of landing a starting or star-caliber player in one of these next two all-important drafts.

Here's more on a move back from ESPN's Todd McShay (h/t to BGN):

A lot of people around the league believe the Eagles could be a wild card in the first round. The Eagles are apparently tossing out feelers to QB-needy teams that might want to move up to No. 12 if one of the top five quarterbacks is still on the board when it’s the Eagles’ turn to draft. But I’ve also heard that there’s some interest in Justin Fields within the organization. But logistically, that’s usually part of the trade-back smoke screen. If you want a team to move up, you’ll of course toss it out there that you might be interested in a quarterback, as well. Pay close attention to what Philadelphia does here; it could get interesting. [ESPN]

The Eagles trading back would mean they'd get a lesser prospect in the first round, but perhaps that's worth surrendering for future flexibility. Or maybe everyone they have an interest in is gone, in a worst case scenario, before the Birds take the clock at 12.

However, the Eagles better be careful, as they are in extreme need of hitting it big in the first round this year, and there is not a ton of depth for them to trade back and land a blue chip prospect.

Here’s what those teams are looking at, per one GM: “From 20 down, you can pick them out of a hat. Who knows? Someone you might have at 60 could be going there.” That dynamic speaks to two things. First, the weird draft cycle (no private workouts, no 30 visits, no combine, just one all-star game and limited school calls in the fall) has made for more guesswork, and less consistency in how players should fall from team to team. And two, there aren’t a ton of elite prospects this year. Some teams will be into their second-round grades by the late teens. I haven’t found a single team yet with more than 18 players carrying first-round grades on their board.

That could make the trade market interesting. Teams in the teens might be reluctant to go back very far, if they see a cliff around No. 20. [Sports Illustrated]

The Eagles could get some very good value for trading out of the top 20, if this cliff does exist in the quality of prospects. Which could be dangerous for Roseman and company.

Clearly, the possibility that Philly does almost anything Thursday is very real. Which makes it even more exciting, and dramatic, as Draft Day approaches.