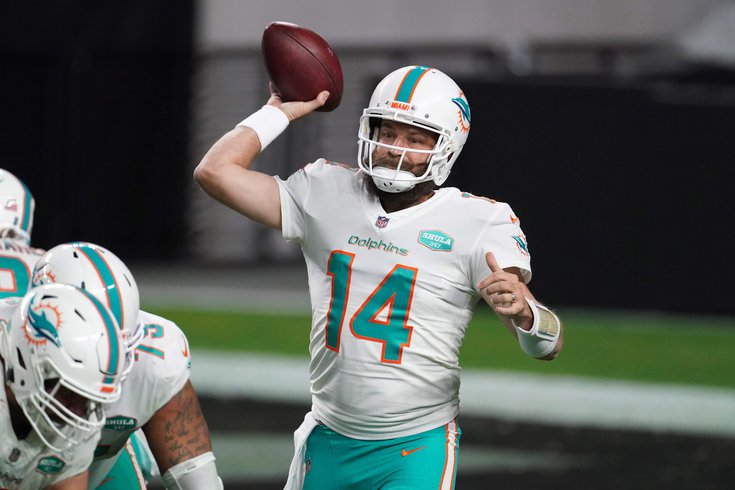 Day 1 of NFL free agency is in the books, and the NFC East was one of the quieter divisions in the league, as three of the four teams don't have much in the way of available funds to acquire players.

With the Philadelphia Eagles completely inactive on Day 1, let's take a quick spin around the NFC East at what the Dallas Cowboys, New York Giants, and Washington Football Team were up to. We'll go in order of each's team's finish last season.

After signing Heinicke to a two-year deal worth $4.75 million earlier this offseason, the Football Team inked Fitzpatrick to a one-year deal worth $10 million, with a max value of $12 million.

Former Dolphins’ QB Ryan Fitzpatrick reached agreement with the Washington Football Team on a one-year deal worth $10 million that could grow to $12 million with incentives, per source. Fitzpatrick is expected to head to camp as the starter, with competition from Taylor Heinicke.

The Football Team also employs Kyle Allen, so if they intend on keeping him on the roster as well (I believe they will), then the Football Team is not going to be in the market for a new quarterback in the 2021 NFL Draft. That's the downside of winning a terrible division and immediately getting bounced from the playoffs in the first round.

The 38-year-old Fitzpatrick is a fun quarterback to watch, and he'll help the Football Team's chances of winning the division, but he's not going to make this team a Super Bowl contender. He's on his fifth team, and he has a career record of 59-86-1, albeit on some teams with bad rosters otherwise.

• OG Brandon Scherff: The Football Team tagged Scherff for the second straight season. He'll count for $18,036,000 on the cap in 2021 if the Football Team can't get a long-term deal worked out with him. Scherff is the highest-paid guard in the league by a mile. The next closest player under contract is Brandon Brooks, at a hair over $14 million.

• K Dustin Hopkins: He's back in a one-year deal. He has made 83.9 percent of his field goal attempts over his seven-year career.

• CB Ronald Darby: After a nice season in Washington in which he was finally able to stay healthy for a full season, Darbs got a three-year deal worth $30 million from the Broncos. 😬

• LB Kevin Pierre Louis: This athletic coverage LB is now on his sixth team in six years. He signed with Houston.

• DE Leonard Williams: The Giants tagged him for the second straight season, at $19,351,200, making him the sixth highest-paid edge rusher in the NFL, per OverTheCap. Williams had a breakout season in 2020, collecting 11.5 sacks. He has 29 career sacks over a seven-year career.

• RB Devontae Booker: Two-year deal worth $6 million. He is a low-mileage for a RB heading into his sixth season. Not sure why you'd pay a backup running back this kind of money on the first day of free agency. Career yards per carry average of 4.0.

• DT Dalvin Tomlinson: The loss of Tomlinson will sting, as he was a legitimately good starting DT for the Giants. He got a two-year deal worth $22 million from the Vikings. Tomlinson was a second-round pick of the Giants in 2017. You don't want good, home-grown players to get away, and the cost the Vikings paid to poach him doesn't seem like a ton of money.

• QB Dak Prescott: The Cowboys got a long-term deal done with Dak, as you're all well aware. We covered that in more detail here.

• OT Cameron Erving: Serviceable backup OT for the Cowboys last year after a slew of linemen got hurt.

• CB/S Jalen Mills: We covered Mills in more depth here. While frustrating at times as a player, the bet here is that Mills will be remembered fondly in Philly as time goes by.

• S Rudy Ford: The idea that any team would have “Sign Rudy Ford” on a short list of priorities on Day 1 of free agency is hilarious to me. Ford signed a two-year deal worth $4.2 million in Jacksonville.