NFL trade rumors: Eagles interested in Julio Jones, but what would it cost — and would it be worth it? 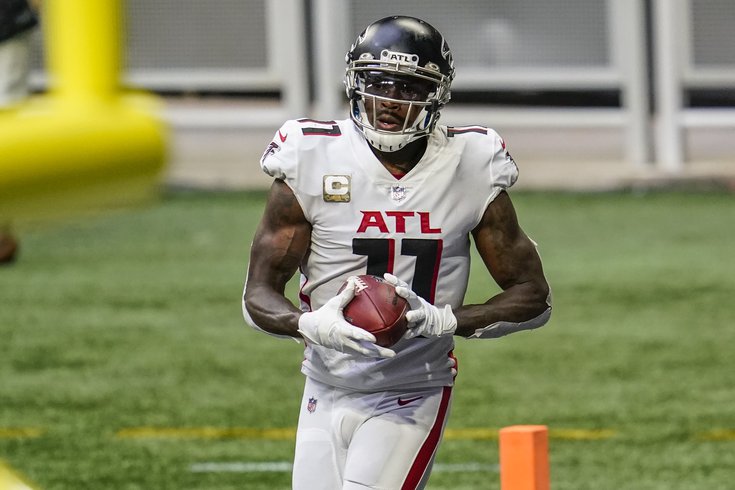 It's getting late in the NFL offseason, at least in terms of major trades and free agent signings, but a key date on the NFL calendar is rapidly approaching: June 1.

That's the day when some contract numbers change and the salary cap accounting shifts, mainly with players who have already been cut with a "Post June 1" designation — like the Eagles did with Alshon Jeffery and Malik Jackson — allowing teams to spread their dead money cap hits over two years instead of having to take on the entire thing in one season.

That rule also applies, however, to players who actually get traded (or cut) after June arrives, which means there could be a sudden flurry of activity around the NFL in the coming days.

How specifically that applies to the Eagles will be addressed more thoroughly by Jimmy Kempski in an in-depth primer coming on Monday. But in the meantime, we figured it would be a good idea to take a look at the latest trade rumors involving the Eagles, specifically as it relates to a player the team is reportedly looking into adding via trade: veteran wideout Julio Jones, who recently (and very publicly, even if he didn't know it at the time) said that he'd be leaving Atlanta, kicking off a likely bidding war for the perennial Pro Bowler's services.

Let's take a look at Jones from an Eagles' perspective, and whether or not they should seriously be considering a trade.

According to multiple reports, the Eagles are indeed looking into acquiring Jones, with the latest coming from Sports Illustrated's Ed Kracz on Saturday.

It appears the San Francisco 49ers have emerged as the frontrunner to land Julio Jones, according to ESPN’s Jeremy Fowler on Saturday.

Still lurking in the shadows, though, are the Eagles.

A pair of sources confirmed, also on Saturday, a report earlier this week that Philadelphia is indeed sniffing around the Atlanta Falcons superstar receiver. And, if it happens, wouldn’t that bring some extra juice for the season opener, which happens to be in Atlanta against the Falcons?  [si.com]

As we wrote last week, the Eagles were always going to be connected to Jones for several very big reasons:

1. Despite the additions they've made in the draft, a veteran wide receiver remains a need (although not necessarily a necessary one).

2. They have as much to offer as (if not more than) any other team, with them likely holding three first-round picks next season.

3. They have Howie Roseman as their GM, and he's always going to be making calls when an impact player becomes available, even if it looks like his team has no way to afford said player (he'll figure something out).

4. Eagles fans are rabid, and dropping their team's name in any rumor is a surefire way for it to pick up traction.

Of course, that's exactly what's happening, even if the team remains a long shot to actually trade for Jones.

What would it cost?

According to an ESPN report from Dianna Russini, who reported on Sunday that the Seahawks are the latest team to show interest in Jones, it's going to cost at least a first-round pick, as the Falcons already reportedly have an offer of that caliber on the table. But there's plenty of skepticism around whether or not that's actually the case. Here's more from Mike Florio of ProFootballTalk:

There’s another intriguing dynamic that team executives have noticed. As one league source expressed it to PFT, if the Falcons truly had a first-round pick on the table, the report would have been confirmed by now, by one of the various reporters at NFL Media or the Atlanta Journal-Constitution or one of the other major outlets covering the sport and/or the team.

There’s also a degree of inconsistency within ESPN. On Saturday, Jeremy Fowler said on SportsCenter that the team he hears more than any other as a potential Jones destination is the 49ers. But the 49ers don’t have a first-round pick to trade in 2022. Fowler also said that the Ravens are interested if the price is right. Well, if there’s a first-round pick on the table, the price will never be lower than that. Then there’s the fact, as teams have noticed, that current king of the ESPN NFL insider mountain Adam Schefter has said nothing about whether the Falcons do or don’t have a first-round pick on the table for Jones.  [nbcsports.com]

Additionally, NFL Network's Mike Garafolo reported that the Rams are in the mix, and they also don't have a first-round pick in 2022 (or 2023 for that matter).

As Florio's colleague, Michael David Smith, pointed out, perhaps teams like the Rams and others are considered contenders because the belief around the league is that Atlanta is bluffing about having that first-round offer on the table and rival teams are expecting the asking price to come down. If that's the case, then it's going to open up the Jones sweepstakes to many other teams.

Still, the Eagles have to remain in the running given what they'd be able to give up in terms of draft compensation.

But, what would it cost — and would it actually make sense?

So, in addition to trade compensation, there's also the issue of fitting Jones' contract in under the salary cap, which isn't going to be easy for the Eagles. A post-June 1 Zach Ertz trade could help, but even that likely wouldn't be enough to get it done unless Atlanta eats some of the contract.

Beyond that, however, one has to weigh the pros and cons of having Jones steal snaps from developing receivers during a season in which a Super Bowl run is extremely unlikely, even if they deal for the veteran. Here's more from ESPN's Tim McManus:

Philadelphia could use a veteran wide receiver. There is not a player over 25 years old in the room currently, and the four wideouts who might see the most action this season -- Jalen Reagor, DeVonta Smith, Greg Ward and Travis Fulgham -- have a combined 32 starts in the NFL. Jones would not only show the young guys the way but turn the Eagles' attack into one of the most dangerous in the NFL.

There are a couple of issues, though.

The Eagles are tight against the salary cap with about $4 million in space. Jones is scheduled to make a base salary of $15.3 million and carry a cap number of $23 million. While there are ways to massage the numbers to make it work, it's fair to wonder whether spending big money and draft capital for a 32-year-old Jones is the wisest move for a team in transition, especially given the resources it has poured into the position of late. The Eagles used first-round picks on Reagor and Smith over the past two years.  [espn.com]

It would probably be smarter to roll with the young guys, see what they're capable of, and build from there.

Also, what about the other needs, like cornerback or linebacker? Maybe any added cap space that comes from an Ertz trade (or anywhere else) could be better used elsewhere. Then again, receivers of Jones' caliber don't become available every day, and if the Birds think he'll still be around and playing at a high level when they're ready to make a run, then it's hard to argue with them at least trying to land a player like this.

But would it be worth a first-round pick? This writer says no — at least not for this current incarnation of the Eagles — but that's ultimately up to Howie Roseman to decide. And a decision could be coming sooner than later...