Philly Godfather: Take the Eagles (even with the points) and more Week 5 betting advice

The red-hot Philly Godfather makes his picks for the upcoming weekend... 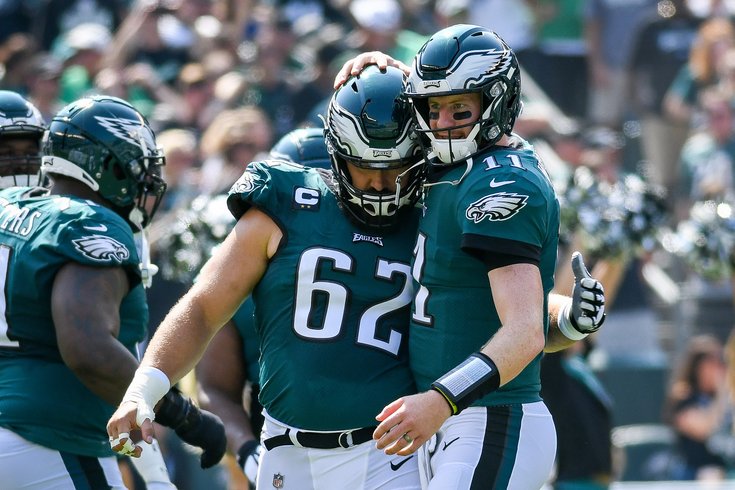 Each Friday for PhillyVoice, Steve Maltepes, known as “The Philly Godfather,” will impart his gambling wisdom on the Eagles and where the smart money is going on various pro football games this weekend. Maltepes — who was 5-0 last week and 9-2 over the last two weeks — is one of the nation’s hottest sports betting experts who appears weekly on national radio and has his own website, www.thephillygodfather.com.

What is the line telling you: Oddsmakers opened this line with the Eagles as large 14-point favorites and the combined total set at 44.5. Since then, there's been some sharp money hit the screen on the Jets here. The Eagles are coming off a huge win in Green Bay and the Jets will be without Sam Darnold, still working his way back from a bout with mono. We don’t like investing money on an 0-3 team. We actually disagree with the sharp money and expect the Eagles to keep rolling.

In order for the Jets to stay within the number they're going to have to run the ball. Le'Veon Bell has 56 carries for 163 yards. He's averaging just 2.9 yards per attempt, and we all know how good the Eagles defense is against the run. The Birds are giving up just 62.0 yards per game this season.

What is the line telling you: Originally the Panthers opened up as 4-point home favorites over the Jags with the combined total set at 42. This game appears to be a coin flip. When we look at each team’s common opponent, the Panthers beat the Texans at home, 16-10, while the Jags were a 2-point conversion away from beating Houston on the road. The Panthers have the better defense and rank much higher than the Jags in opponent yards per play, but if you take away the Chiefs game from Jacksonville's schedule, they also end up in the top 10 in that metric.

On offense, the Jags rank 15 spots higher in yards per play and even though both teams have backups at quarterback. It’s quite evident that Jacksonville’s Gardner Minshew looks to be the more polished of the two. Kyle Allen has been a solid game manager so far, but after watching Minshew bring his team back vs. the Broncos last week, he definitely gets the edge. The Jags have also played slightly better teams when it comes to net-yards-per-play rankings.

Bottom line: We like the Jags plus-3.5. Somebody is winning this game by field goal.

What is the line telling you: Oddsmakers opened this line with the 49ers being 5-point home favorites over the Browns with the combined total set at 47. There has been some sharp money that attacked the screen on the side which forced bookmakers to drop this line to 3/3.5, depending on where you shop. The total has also seen a down tick to the current number of 46.5. We like the fact San Francisco is coming off the bye with extra time to prepare vs. a team that just played their Super Bowl last week and blew out the Ravens by double digits.

Anytime a team like the Browns are coming off an emotional win off a division foe, then have to travel out to the West Coast, there's always a chance of they come out flat. This is a great spot here for the 49ers, who rank six spots better than the Browns in defensive efficiency, and 23 spots better in protecting their quarterback, only giving up two sacks on the year.