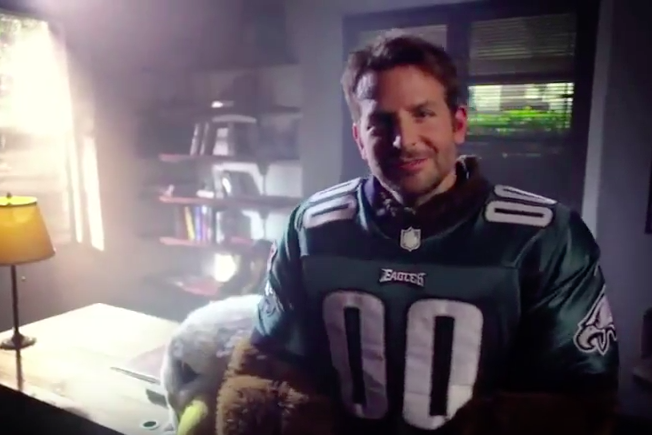 All kinds of disparaging things get said about Philadelphia sports fans. It's a cliche. We don't need to review that we're "awful people," as the departing governor of New Jersey wanted the world to know more than once. We throw stuff, drink too much (and then throw stuff at our own players), shout obscenities, fight with people after games, and don't often back it up with championships. This is all well-known.

But what if one of Philadelphia's best ambassadors for the sports world proved to be a swell guy when in the company of rivals? Would it change anyone's mind even slightly if superfan Bradley Cooper, the guy who wore a DeSean Jackson jersey throughout "Silver Linings Playbook," displayed civility to an enemy?

The Philadelphia Flyers and New York Rangers are bitter rivals, with the latter getting the best of us in seven games in the playoffs in 2014. They're a team we hate every bit as much as we despise the Giants, Mets, Yankees, Knicks and Nets. No one really cares about the Jets.

Writing for The Players' Tribune, Rangers center Kevin Hayes regales the sports world with clear evidence of Cooper being a magnanimous Philly fan.

The Rangers had just traded to acquire Keith Yandle in March 2015, about a year after the Rangers knocked the Flyers out of the playoffs, and Hayes wanted to give his new teammate a warm welcome to New York. Then a rookie, Hayes took Yandle to a favorite restaurant of his in the Meatpacking District of the city. They sat down to eat and this happened:

We had just received the bill when I got a feeling that someone was staring at me from four or five tables over. I kind of let my eyes wander to where this person was sitting. In an instant, I locked eyes with the guy. He looked so familiar, but I couldn’t really place him. I felt like I had seen him before — a bunch of times, too.

A couple of seconds later, it hit me.

I looked back at Yands, leaned a little closer and interrupted him.

I tried to signal in his direction with my eyes.

Almost immediately after Yands said that, the restaurant manager approached our table.

All this begs the question, would an "awful person" do such a thing? Instead of repeating the same tired knocks against Philly fans, let's recognize that superstar actor Bradley Cooper has no trouble pleasantly dining with a New York Ranger. And if you are an awful person, maybe take this as an example to learn how to simply point to the scoreboard when we're winning or stick to the wave when we're not.