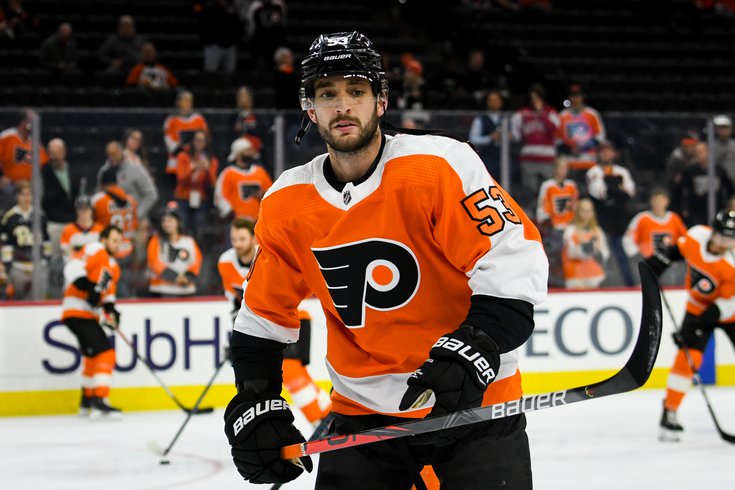 UPDATE [Wednesday, 12:50 p.m.] — It appears that Shayne Gostisbehere isn't going anywhere after all.

According to reports, the Flyers defenseman cleared waivers on Wednesday, and based on Chuck Fletcher's comments a day earlier, it sounds like Gostisbehere is headed to the taxi squad.

Will the Flyers still make a big addition to blue line ahead of the April 12 trade deadline? Stay tuned...

Shockwaves were sent throughout the Delaware Valley — or at least through the segment of people who regularly wear the orange and black — on early Tuesday afternoon when the Flyers announced that they had placed homegrown defenseman Shayne Gostisbehere on waivers.

With the Flyers struggling mightily this month, this move could be a way for general manager Chuck Fletcher to send a message to his team that, after finishing last year near the top of the Eastern Conference. Th team is currently on the outside of the playoff picture looking in. That fact, especially this late in the season, is unacceptable.

There were other moves the GM could've made, but this one will not only make a big enough impact, but it also makes sense both on the ice and on the cap sheet. The Flyers could simply be placing him on waivers with the hope the slumping defenseman clears and can be assigned to the taxi squad, which would allow the team to bank some cap space (with his contract not counting against their total while he's not on the big club).

Obviously it's about much more about that.

"We do believe that he's going to clear waivers."

But there's a chance the 27-year-old blue liner and former All-Rookie Team member and Calder runner-up does not clear waivers and is instead picked up by another team who hopes they can get the once-promising star back on the right track. After all, this is the same guy who put up a dazzling 46 points in his rookie year and 150 over his first three seasons, including a career-high 65 in 2017-18.

From there, it's been all downhill for Gostisbehere, who recorded just 60 points in his last 145 games played. And while those numbers aren't outright bad for your average defenseman, they're a little tougher to swallow in Gostisbehere's case, as he can be a defensive liability on the ice. And when he's not finding the back of the net — or setting up his teammates — those deficiencies on the other end of the ice become all the more notable.

Whether or not he gets claimed depends on who you ask, and we'll find out whether or not he'll be back in the next 24 or so hours. But by shedding Gostisbehere's $4.5 million cap hit, the Flyers appear to be opening things up to make a major acquisition ahead of the April 12 trade deadline, according to Sam Carchidi of The Philadelphia Inquirer.

#Flyers appear to be trying to free cap space to make a major deal.

The Flyers, who have struggled mightily on defense this season can't really afford to be just giving away defenders, no matter how much of a liability they've been. And if Gostisbehere gets claimed, they'll almost certainly need to replace him — and should be trying to actively upgrade the spot. After all, it's going to be tough for Carter Hart to figure things out if the defense in front of him continues to let him down. But that's another story for another day.

Interestingly enough, the Flyers have been linked to a few defensemen ahead of the upcoming deadline, including Nashville's Ryan Ellis as recently as last week. They've also popped up in rumors involving Ellis' teammate, Mattias Ekholm, and others.

And it seems like Fletcher is ready to deal. Here's more from Carchidi following Fletcher's session with the media last week:

“I’ve been much more aggressive than a lot of people, just looking at different options,” Fletcher continued. “There doesn’t seem to be a lot of teams willing to take on dollars and term at this point in time.”

Fletcher said there were more teams “looking to move pieces than take on pieces.”

Nashville’s Mattias Ekholm and Columbus’s David Savard are defensemen who could help the Flyers, who are 30th in the league in goals allowed per game and 31st in save percentage. The Flyers are also reportedly interested in Nashville defenseman Ryan Ellis, who is sidelined because of recent shoulder surgery but could help them down the road.

“We’ll take a look, and anything we do, we want to make sure it makes sense,” said Fletcher, who was not talking about any specific players. “If we can fill a box for the long-term right now, we can potentially explore that. But certainly, if we can upgrade our team, we’ll do that.”  [inquirer.com]

So while the decision to place Gostisbehere on waivers is shocking, it seems like the move will serve two purposes for Vigneault's team: It sends a message to the players still on the roster and provides a bit of flexibility should they decide those players aren't enough to get the job done this season.