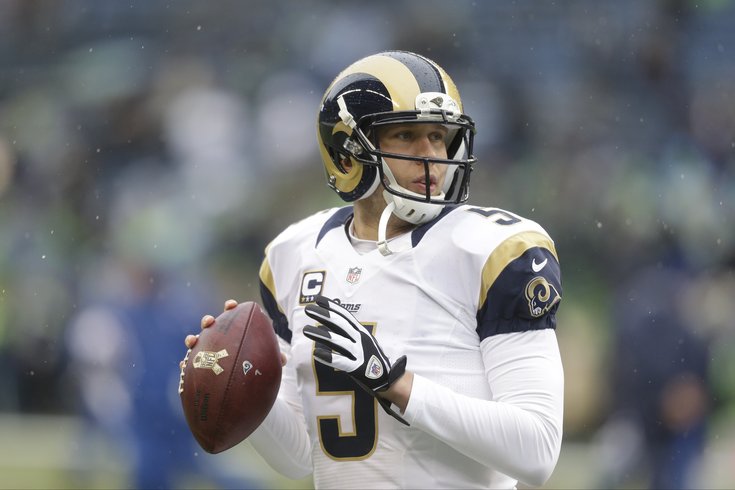 Sam Bradford has competition for the most ill-conceived strike of the offseason. According to Jim Trotter of ESPN, former Eagles quarterback Nick Foles has stayed away from Rams facilities since the team selected Jared Goff first overall in the 2016 NFL Draft. He is also skipping voluntary OTAs. From ESPN:

Veteran quarterback Nick Foles, a regular when offseason workouts began April 18, has not participated in a team-run training session since the Rams took Goff first overall. The fifth-year pro even skipped the start of organized team activities on Tuesday, and multiple sources told ESPN.com it is because the Rams drafted a quarterback.

Foles was of course traded along with a second round pick to the Rams for Bradford in March of 2015. Both quarterbacks have been delusional about their worth this offseason.

After signing a two-year deal worth $36 million and pocketing a $5.5 million signing bonus, Bradford went on strike and demanded a trade because the Eagles traded up for the No. 2 overall pick, where they were sure to draft a quarterback. Over a six-year career in the NFL, Bradford has won a grand total of 25 games, or just over four per season.

Foles, meanwhile, was arguably the worst starting quarterback in the NFL last season, when he threw 7 TDs vs. 10 INTs, posting a dismal 69.0 QB rating before being benched for Case Keenum. Foles signed a two-year contract extension worth $24.5 million last August.

Kids, you should strive to be a bad starting NFL quarterback when you grow up.